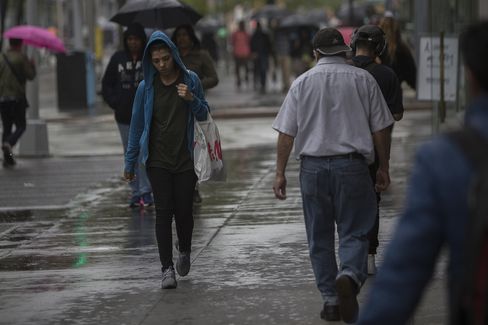 Consumer balance sheets have strengthened since the financial crisis, but their confidence is still lagging far, far behind.

There are a number of things for U.S. consumers to worry about, even if personal finances are fairly strong. An upcoming election in the U.S. and unrest overseas has started to show up in economic data measuring consumer sentiment, which hasn't seen much of an uptick over the past two years despite the stock market's march higher. 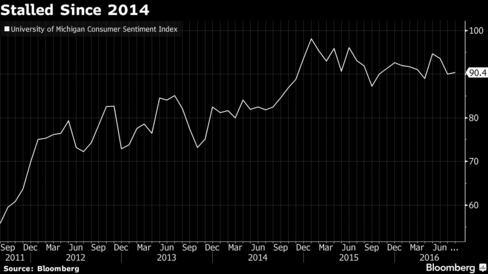 Executives at frontline consumer companies with have a first hand look at this phenomenon, so when Goldman Sachs Group Inc. did its quarterly skimming of earnings calls, this imbalance was one of the four key themes they found.

"Consumers are strong financially, but sentiment is mixed," Goldman's Chief U.S. Equity Strategist David Kostin and team wrote in a new note to clients. "Managements expressed concern that consumers will postpone spending due to rising political and economic uncertainty. However, financial firms noted an improvement in household balance sheets."

Here's a look at a few of the key examples Kostin and team pulled from this quarter's earnings calls.

BlackRock Inc. says its clients are often at a loss for where to put their money:

"Clients do not know what to do with their money. They are afraid and they are pulling back as evidenced by more than $55 trillion in bank deposits sitting in the United States, China and Japan alone. And even as markets have rallied recently, many clients have missed that upside and find themselves feeling even further behind."

Starbucks Corp. executives spoke on a number of issues that are causing the consumer to be more cautious:

"I think we have a situation where you have a very uncertain election. You have domestic civil unrest with regard to race. And I think the issues around terror have created a level of anxiety....There are a number of things that we are facing as citizens, and I think the direction of the country. And so, I think this is a multi-prong issue that almost every company and every consumer brand is facing as a result of what Ive just described."

McDonalds Corp. leadership mentioned many of the same concerns that Starbucks addressed:

"I think generally, there's just a broader level of uncertainty in consumers minds at the moment, both trying to gauge their financial security going forward, you know, whether through elections or through global events, people are slightly mindful of an unsettled world. And when people are uncertain, when families are uncertain, caution starts to prevail and they start to hold back on spend."

Visa Inc. CEO Charlie Scharf was a bit more optimistic, saying he was impressed with the average consumer's resiliency.

"The consumer has remained remarkably steadfast in the face of significant global instability."

With the presidential election still months away, at least one of these concerns will carry on through the next quarter.