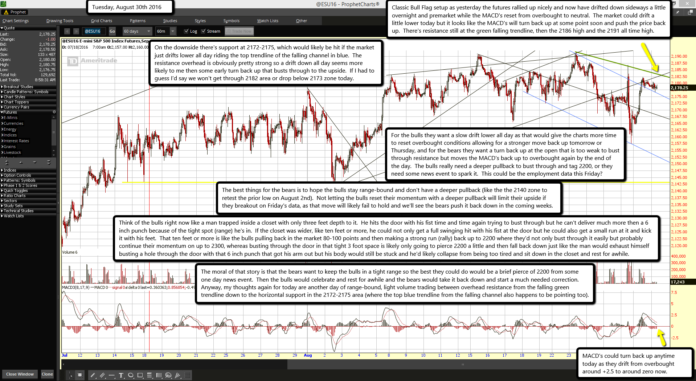 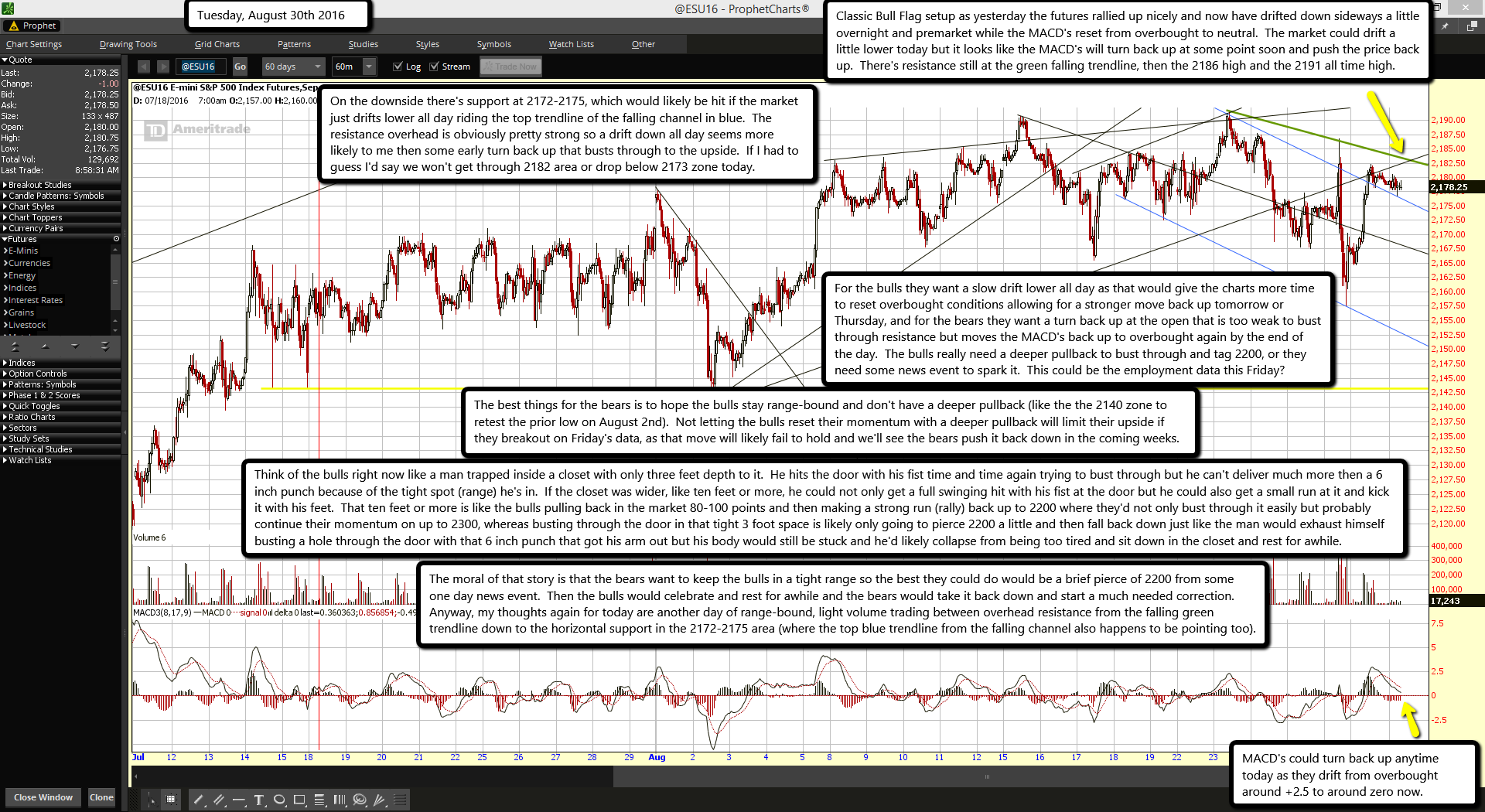 Classic Bull Flag setup as yesterday the futures rallied up nicely and now have drifted down sideways a little overnight and premarket while the MACD's reset from overbought to neutral.  The market could drift a little lower today but it looks like the MACD's will turn back up at some point soon and push the price back up.  There's resistance still at the green falling trendline, then the 2186 high and the 2191 all time high.

On the downside there's support at 2172-2175, which would likely be hit if the market just drifts lower all day riding the top trendline of the falling channel in blue.  The resistance overhead is obviously pretty strong so a drift down all day seems more likely to me then some early turn back up that busts through to the upside.  If I had to guess I'd say we won't get through 2182 area or drop below 2173 zone today.

For the bulls they want a slow drift lower all day as that would give the charts more time to reset overbought conditions allowing for a stronger move back up tomorrow or Thursday, and for the bears they want a turn back up at the open that is too weak to bust through resistance but moves the MACD's back up to overbought again by the end of the day.  The bulls really need a deeper pullback to bust through and tag 2200, or they need some news event to spark it.  This could be the employment data this Friday?

The best things for the bears is to hope the bulls stay range-bound and don't have a deeper pullback (like the the 2140 zone to retest the prior low on August 2nd).  Not letting the bulls reset their momentum with a deeper pullback will limit their upside if they breakout on Friday's data, as that move will likely fail to hold and we'll see the bears push it back down in the coming weeks.

Think of the bulls right now like a man trapped inside a closet with only three feet depth to it.  He hits the door with his fist time and time again trying to bust through but he can't deliver much more then a 6 inch punch because of the tight spot (range) he's in.  If the closet was wider, like ten feet or more, he could not only get a full swinging hit with his fist at the door but he could also get a small run at it and kick it with his feet.  That ten feet or more is like the bulls pulling back in the market 80-100 points and then making a strong run (rally) back up to 2200 where they'd not only bust through it easily but probably continue their momentum on up to 2300, whereas busting through the door in that tight 3 foot space is likely only going to pierce 2200 a little and then fall back down just like the man would exhaust himself busting a hole through the door with that 6 inch punch that got his arm out but his body would still be stuck and he'd likely collapse from being too tired and sit down in the closet and rest for awhile.

The moral of that story is that the bears want to keep the bulls in a tight range so the best they could do would be a brief pierce of 2200 from some one day news event.  Then the bulls would celebrate and rest for awhile and the bears would take it back down and start a much needed correction.  Anyway, my thoughts again for today are another day of range-bound, light volume trading between overhead resistance from the falling green trendline down to the horizontal support in the 2172-2175 area (where the top blue trendline from the falling channel also happens to be pointing too).