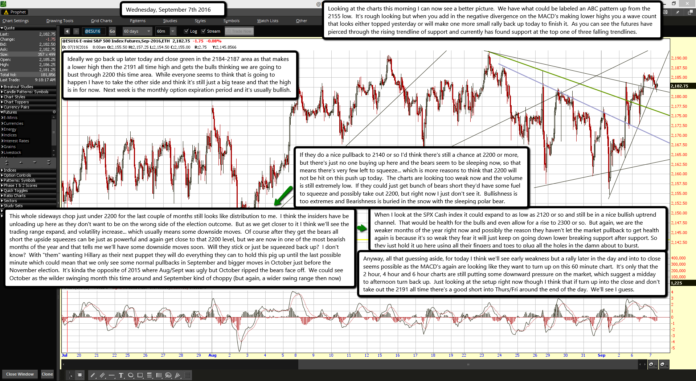 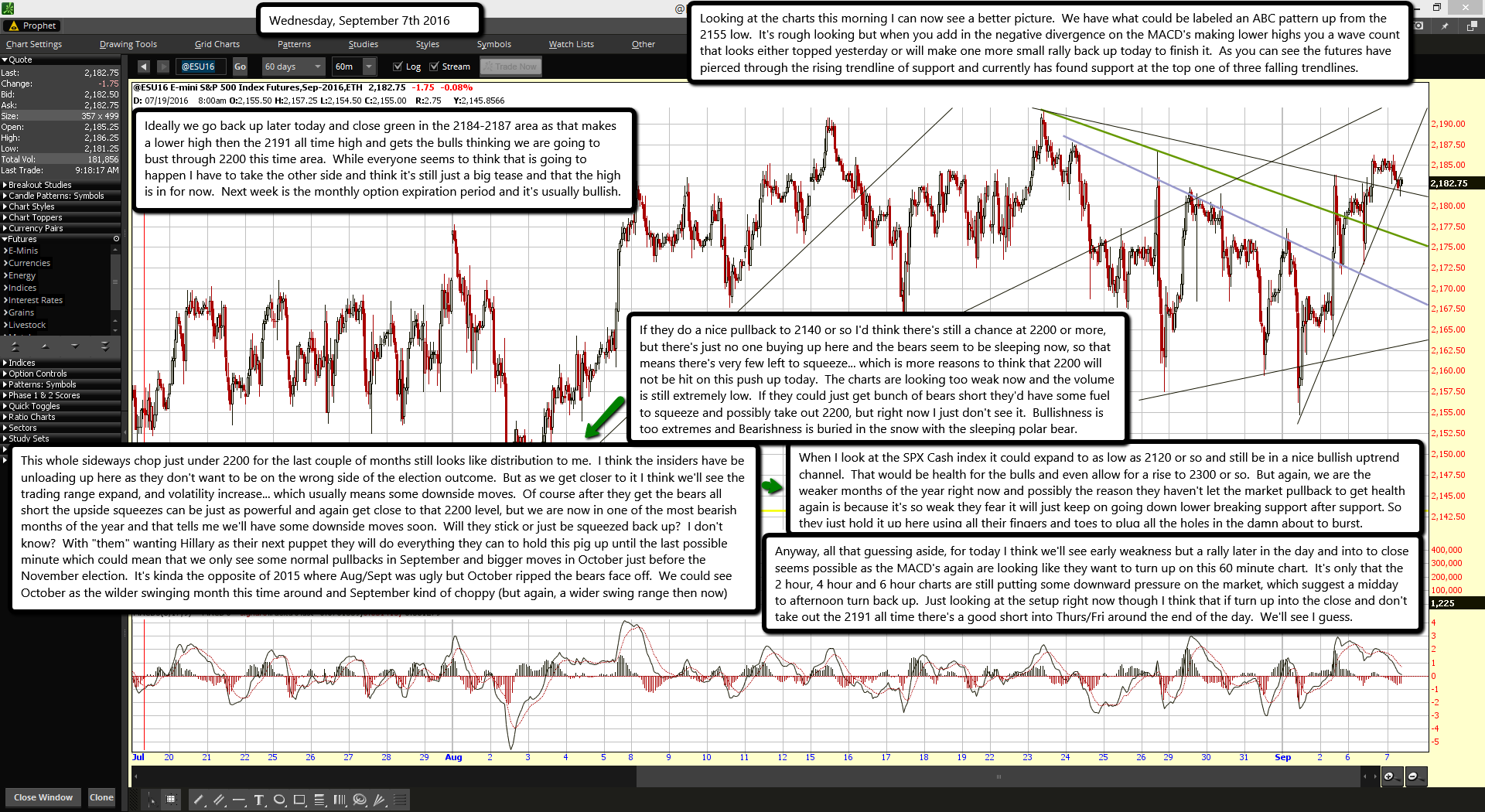 Looking at the charts this morning I can now see a better picture.  We have what could be labeled an ABC pattern up from the 2155 low.  It's rough looking but when you add in the negative divergence on the MACD's making lower highs you a wave count that looks either topped yesterday or will make one more small rally back up today to finish it.  As you can see the futures have pierced through the rising trendline of support and currently has found support at the top one of three falling trendlines.

Ideally we go back up later today and close green in the 2184-2187 area as that makes a lower high then the 2191 all time high and gets the bulls thinking we are going to bust through 2200 this time area.  While everyone seems to think that is going to happen I have to take the other side and think it's still just a big tease and that the high is in for now.  Next week is the monthly option expiration period and it's usually bullish.

If they do a nice pullback to 2140 or so I'd think there's still a chance at 2200 or more, but there's just no one buying up here and the bears seem to be sleeping now, so that means there's very few left to squeeze... which is more reasons to think that 2200 will not be hit on this push up today.  The charts are looking too weak now and the volume is still extremely low.  If they could just get bunch of bears short they'd have some fuel to squeeze and possibly take out 2200, but right now I just don't see it.  Bullishness is too extremes and Bearishness is buried in the snow with the sleeping polar bear.

This whole sideways chop just under 2200 for the last couple of months still looks like distribution to me.  I think the insiders have be unloading up here as they don't want to be on the wrong side of the election outcome.  But as we get closer to it I think we'll see the trading range expand, and volatility increase... which usually means some downside moves.  Of course after they get the bears all short the upside squeezes can be just as powerful and again get close to that 2200 level, but we are now in one of the most bearish months of the year and that tells me we'll have some downside moves soon.  Will they stick or just be squeezed back up?  I don't know?  With "them" wanting Hillary as their next puppet they will do everything they can to hold this pig up until the last possible minute which could mean that we only see some normal pullbacks in September and bigger moves in October just before the November election.  It's kinda the opposite of 2015 where Aug/Sept was ugly but October ripped the bears face off.  We could see October as the wilder swinging month this time around and September kind of choppy (but again, a wider swing range then now).

When I look at the SPX Cash index it could expand to as low as 2120 or so and still be in a nice bullish uptrend channel.  That would be health for the bulls and even allow for a rise to 2300 or so.  But again, we are the weaker months of the year right now and possibly the reason they haven't let the market pullback to get health again is because it's so weak they fear it will just keep on going down lower breaking support after support. So they just hold it up here using all their fingers and toes to plug all the holes in the damn about to burst.

Anyway, all that guessing aside, for today I think we'll see early weakness but a rally later in the day and into to close seems possible as the MACD's again are looking like they want to turn up on this 60 minute chart.  It's only that the 2 hour, 4 hour and 6 hour charts are still putting some downward pressure on the market, which suggest a midday to afternoon turn back up.  Just looking at the setup right now though I think that if turn up into the close and don't take out the 2191 all time there's a good short into Thurs/Fri around the end of the day.  We'll see I guess.