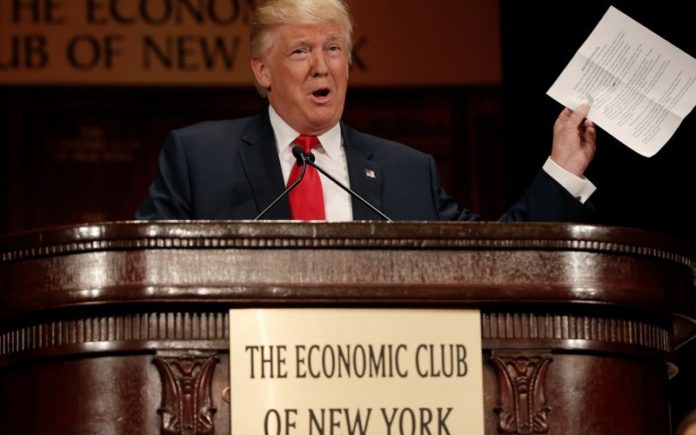 After an economic speech in New York, the GOP nominee said for the second time this week that the Federal Reserve is a tool of the Obama administration—a claim economists have widely panned.

After delivering an economic speech from a teleprompter promising a lofty 25 million new jobs in the next decade, Trump sat down for a brief Q&A at the ritzy grand ballroom in the Waldorf Astoria, during which he made a peculiar unscripted observation.

“I think the Fed is being totally controlled,” Trump said in response to a question about interest rates. “They’re not raising rates. And they’re being controlled politically.”

His suggestion, that the Federal Reserve System, which operates as an independent agency, was rigged by the Obama administration to allow the president to look successful as he leaves office this year, is as strange as it is false.

“It seems to me that Mr. Trump is trying to bend the narrative about the economy in a way that will promote conspiracy theories,” Peter Conti-Brown, a professor of legal studies and business ethics at the Wharton School of Business (Trump’s alma mater), told The Daily Beast.

And, as with many Trump’s outlandish statements, it’s not the first time he’s made the claim. But given the crowd he was speaking to—The Economic Club of New York, a who’s who of top business and finance executives—it was particularly puzzling.

In a phone interview with CNBC earlier this week, Trump said that U.S. Federal Reserve Chair Janet Yellen should be “ashamed” of what she’s doing to the country financially and that “she’s obviously political and she’s doing what Obama wants her to do.” He has not provided any evidence as to how the president could be putting pressure on her to do this. What’s more is that in May, he told CNBC that he was “for low interest rates, and I think we keep them low,” adding to the utter confusion surrounding these remarks.

The U.S. central bank has only raised interest rates once since cutting them to zero in response to the 2008 financial crisis. It has indicated that there might be a rise of .25 percent but that the rate of growth would be slow in the future.

In the immediate aftermath of his remarks on CNBC, Harvard professor and former Treasury secretary Larry Summers said Trump had absolutely no idea what he was talking about.

“I have my differences with aspects of Fed policy. But Trump is talking nonsense,” Summers told Politico. “Janet Yellen is the least political person in Washington. The Fed has been driven in its decision making by the reality that we have been below target inflation for eight years and inflation expectations are falling. That, not politics, explains the Fed’s choices.”

Conti-Brown, who wrote a book entitled The Power and Independence of the Federal Reserve, added that skepticism about the functioning of the institution is a good thing but that Trump’s remarks amounted to blind guesswork. But the danger is that it could be an effective argument.

A key facet of Trump’s rhetoric overall is hinged on sowing distrust in major institutions and in turn saying that he alone can fix them. He peddles conspiracies with ease and frequency and even proudly took credit for a recent poll indicating that the public trust’s of media was at an all-time low. Trump has also often suggested that the election will be rigged, a mantra that has led many of his supporters in recent polling to believe that a Hillary Clinton victory is in fact false.

The freewheeling nature of Trump’s response to these questions undermines his ability to remain on message when teleprompters are no longer around.

And once again, as has been his role in the past, vice presidential candidate Indiana Gov. Mike Pence attempted to clean up the controversial statement during an appearance on CNN later in the day.

But he fell short of agreeing with the unfounded claim that Yellen was manipulating the system to benefit the Obama administration.

“I think it’s hard to understand why the Fed continues to advance policies that really work for hedge fund managers on Wall Street, here in New York City, but really aren’t working for working families on Main Street,” Pence said. “I think Donald Trump is saying that it’s time that we brought forward the kind of economic policies that will allow interest rates to return to a rational point.”

Trump’s stance on the issue, outside of recent assertions of a political conspiracy, are confusing at best.

As recently as April, Trump asserted that low interest rates were a good thing.

“The best thing we have going for us is that interest rates are so low,” he told Fortune just five months ago.

This kind of waffling on key issues underscores the freewheeling, and sometimes hollow nature, of Trump’s campaign.

And even as he can hold his own as a candidate with a script in front of him, the true Trump comes out when the teleprompter disappears.