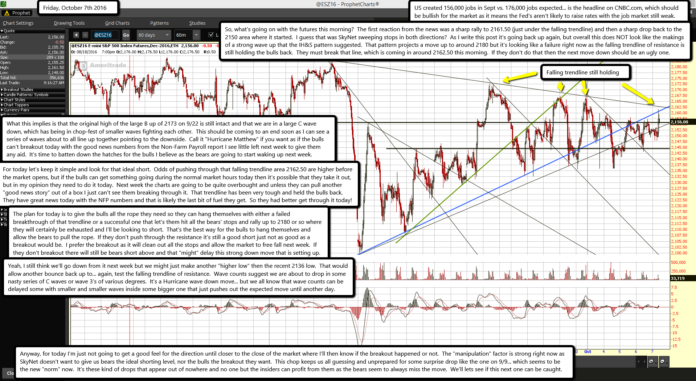 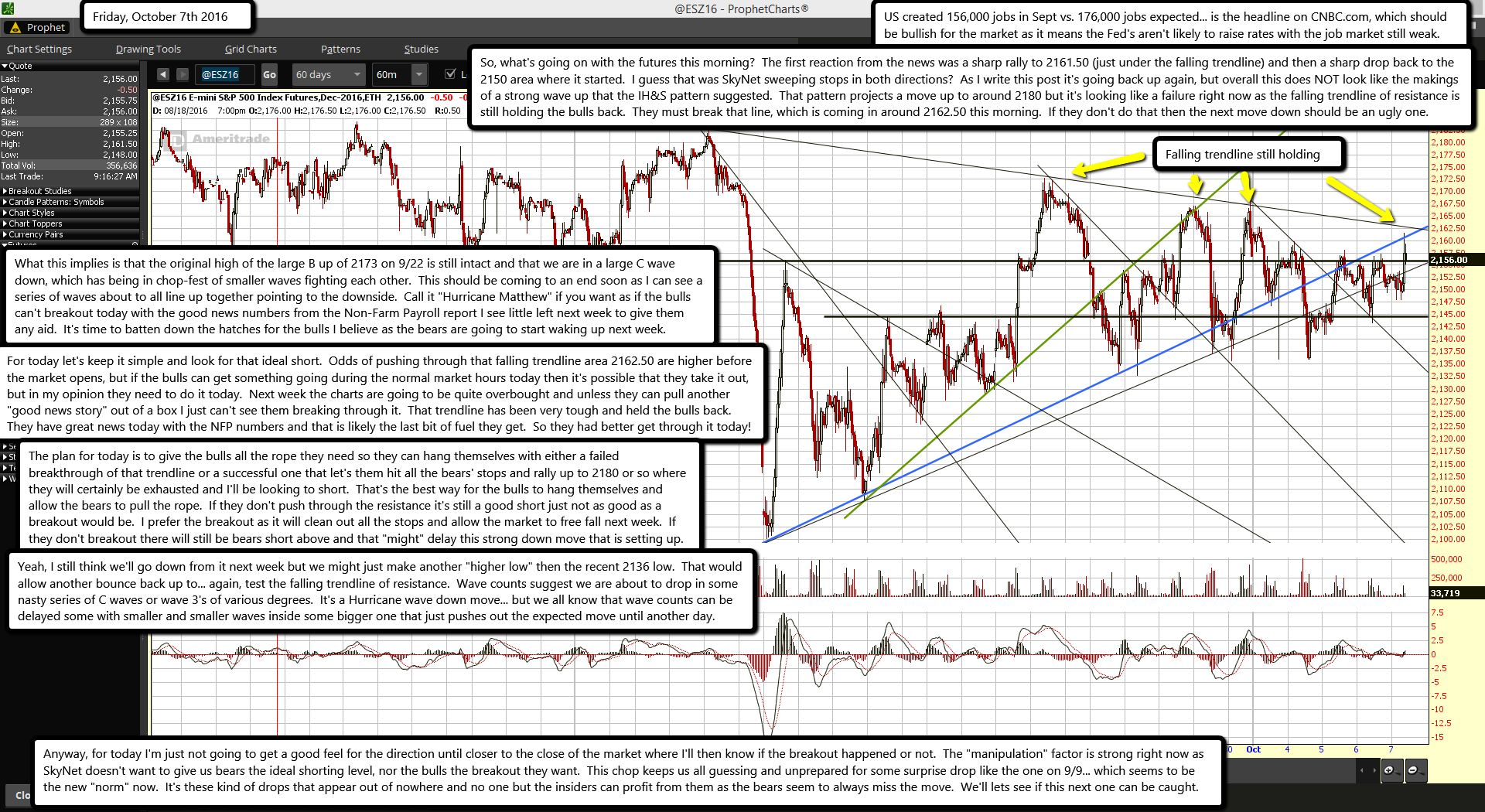 US created 156,000 jobs in Sept vs. 176,000 jobs expected... is the headline on CNBC.com, which should be bullish for the market as it means the Fed's aren't likely to raise rates with the job market still weak.

So, what's going on with the futures this morning?  The first reaction from the news was a sharp rally to 2161.50 (just under the falling trendline) and then a sharp drop back to the 2150 area where it started.  I guess that was SkyNet sweeping stops in both directions?  As I write this post it's going back up again, but overall this does NOT look like the makings of a strong wave up that the IH&S pattern suggested.  That pattern projects a move up to around 2180 but it's looking like a failure right now as the falling trendline of resistance is still holding the bulls back.  They must break that line, which is coming in around 2162.50 this morning.  If they don't do that then the next move down should be an ugly one.

What this implies is that the original high of the large B up of 2173 on 9/22 is still intact and that we are in a large C wave down, which has being in chop-fest of smaller waves fighting each other.  This should be coming to an end soon as I can see a series of waves about to all line up together pointing to the downside.  Call it "Hurricane Matthew" if you want as if the bulls can't breakout today with the good news numbers from the Non-Farm Payroll report I see little left next week to give them any aid.  It's time to batten down the hatches for the bulls I believe as the bears are going to start waking up next week.

For today let's keep it simple and look for that ideal short.  Odds of pushing through that falling trendline area 2162.50 are higher before the market opens, but if the bulls can get something going during the normal market hours today then it's possible that they take it out, but in my opinion they need to do it today.  Next week the charts are going to be quite overbought and unless they can pull another "good news story" out of a box I just can't see them breaking through it.  That trendline has been very tough and held the bulls back.  They have great news today with the NFP numbers and that is likely the last bit of fuel they get.  So they had better get through it today!

The plan for today is to give the bulls all the rope they need so they can hang themselves with either a failed breakthrough of that trendline or a successful one that let's them hit all the bears' stops and rally up to 2180 or so where they will certainly be exhausted and I'll be looking to short.  That's the best way for the bulls to hang themselves and allow the bears to pull the rope.  If they don't push through the resistance it's still a good short just not as good as a breakout would be.  I prefer the breakout as it will clean out all the stops and allow the market to free fall next week.  If they don't breakout there will still be bears short above and that "might" delay this strong down move that is setting up.

Yeah, I still think we'll go down from it next week but we might just make another "higher low" then the recent 2136 low.  That would allow another bounce back up to... again, test the falling trendline of resistance.  Wave counts suggest we are about to drop in some nasty series of C waves or wave 3's of various degrees.  It's a Hurricane wave down move... but we all know that wave counts can be delayed some with smaller and smaller waves inside some bigger one that just pushes out the expected move until another day.

Anyway, for today I'm just not going to get a good feel for the direction until closer to the close of the market where I'll then know if the breakout happened or not.  The "manipulation" factor is strong right now as SkyNet doesn't want to give us bears the ideal shorting level, nor the bulls the breakout they want.  This chop keeps us all guessing and unprepared for some surprise drop like the one on 9/9... which seems to be the new "norm" now.  It's these kind of drops that appear out of nowhere and no one but the insiders can profit from them as the bears seem to always miss the move.  We'll lets see if this next one can be caught.