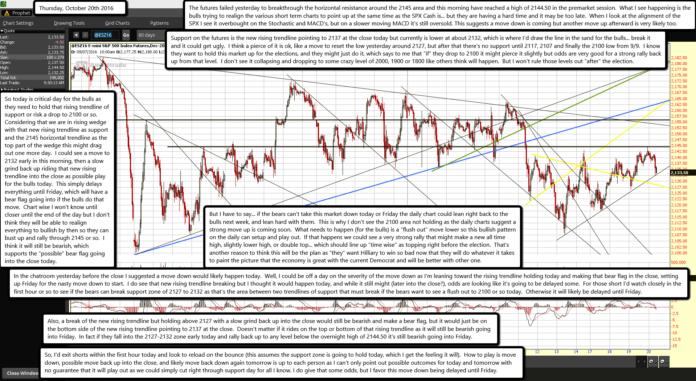 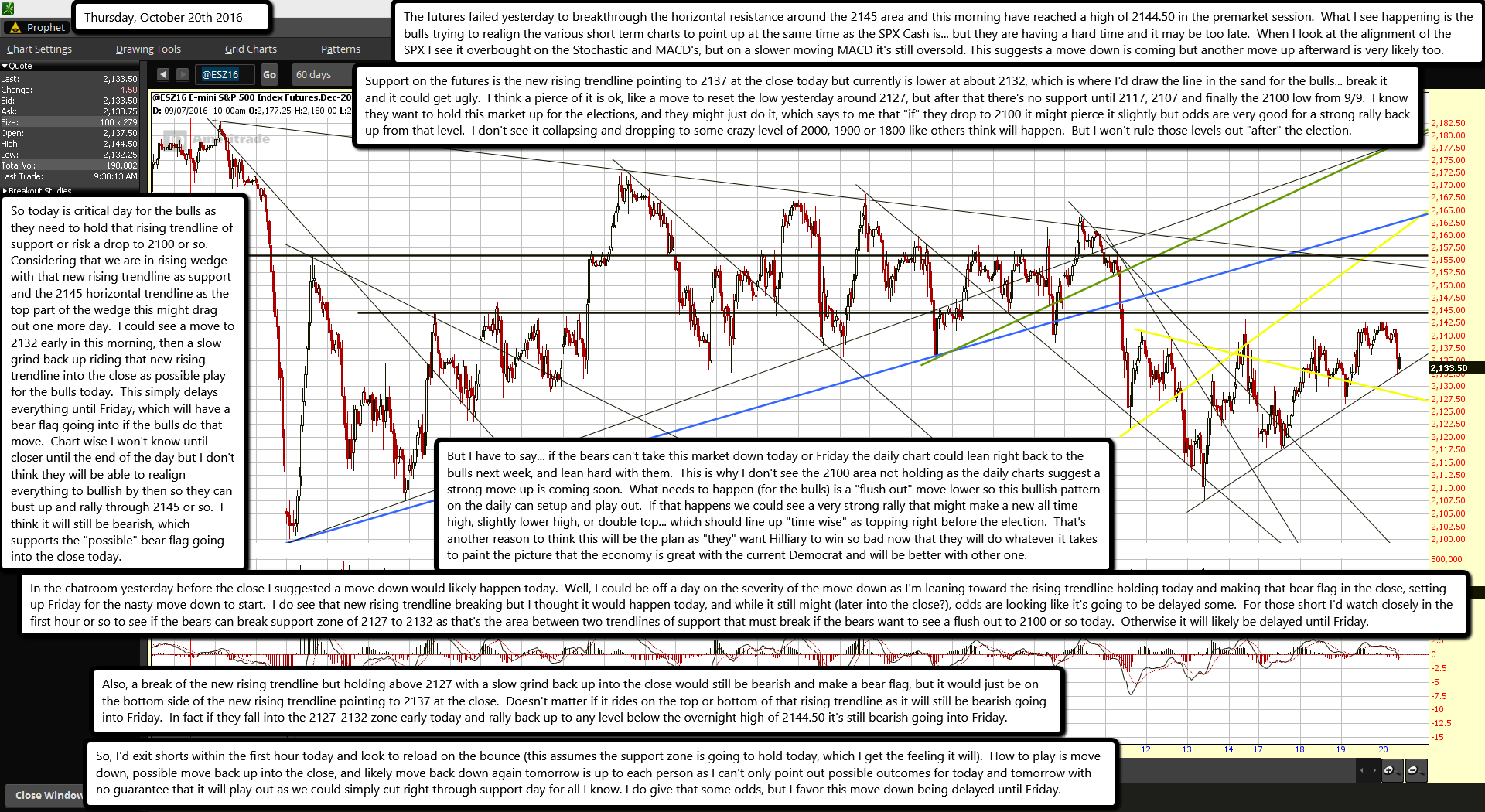 The futures failed yesterday to breakthrough the horizontal resistance around the 2145 area and this morning have reached a high of 2144.50 in the premarket session.  What I see happening is the bulls trying to realign the various short term charts to point up at the same time as the SPX Cash is... but they are having a hard time and it may be too late.  When I look at the alignment of the SPX I see it overbought on the Stochastic and MACD's, but on a slower moving MACD it's still oversold. This suggests a move down is coming but another move up afterward is very likely too.

Support on the futures is the new rising trendline pointing to 2137 at the close today but currently is lower at about 2132, which is where I'd draw the line in the sand for the bulls... break it and it could get ugly.  I think a pierce of it is ok, like a move to reset the low yesterday around 2127, but after that there's no support until 2117, 2107 and finally the 2100 low from 9/9.  I know they want to hold this market up for the elections, and they might just do it, which says to me that "if" they drop to 2100 it might pierce it slightly but odds are very good for a strong rally back up from that level.  I don't see it collapsing and dropping to some crazy level of 2000, 1900 or 1800 like others think will happen.  But I won't rule those levels out "after" the election.

So today is critical day for the bulls as they need to hold that rising trendline of support or risk a drop to 2100 or so.  Considering that we are in rising wedge with that new rising trendline as support and the 2145 horizontal trendline as the top part of the wedge this might drag out one more day.  I could see a move to 2132 early in this morning, then a slow grind back up riding that new rising trendline into the close as possible play for the bulls today.  This simply delays everything until Friday, which will have a bear flag going into if the bulls do that move.  Chart wise I won't know until closer until the end of the day but I don't think they will be able to realign everything to bullish by then so they can bust up and rally through 2145 or so.  I think it will still be bearish, which supports the "possible" bear flag going into the close today.

But I have to say... if the bears can't take this market down today or Friday the daily chart could lean right back to the bulls next week, and lean hard with them.  This is why I don't see the 2100 area not holding as the daily charts suggest a strong move up is coming soon.  What needs to happen (for the bulls) is a "flush out" move lower so this bullish pattern on the daily can setup and play out.  If that happens we could see a very strong rally that might make a new all time high, slightly lower high, or double top... which should line up "time wise" as topping right before the election.  That's another reason to think this will be the plan as "they" want Hilliary to win so bad now that they will do whatever it takes to paint the picture that the economy is great with the current Democrat and will be better with other one.

In the chatroom yesterday before the close I suggested a move down would likely happen today.  Well, I could be off a day on the severity of the move down as I'm leaning toward the rising trendline holding today and making that bear flag in the close, setting up Friday for the nasty move down to start.  I do see that new rising trendline breaking but I thought it would happen today, and while it still might (later into the close?), odds are looking like it's going to be delayed some.  For those short I'd watch closely in the first hour or so to see if the bears can break support zone of 2127 to 2132 as that's the area between two trendlines of support that must break if the bears want to see a flush out to 2100 or so today.  Otherwise it will likely be delayed until Friday.

Also, a break of the new rising trendline but holding above 2127 with a slow grind back up into the close would still be bearish and make a bear flag, but it would just be on the bottom side of the new rising trendline pointing to 2137 at the close.  Doesn't matter if it rides on the top or bottom of that rising trendline as it will still be bearish going into Friday.  In fact if they fall into the 2127-2132 zone early today and rally back up to any level below the overnight high of 2144.50 it's still bearish going into Friday.

So, I'd exit shorts within the first hour today and look to reload on the bounce (this assumes the support zone is going to hold today, which I get the feeling it will).  How to play is move down, possible move back up into the close, and likely move back down again tomorrow is up to each person as I can't only point out possible outcomes for today and tomorrow with no guarantee that it will play out as we could simply cut right through support day for all I know. I do give that some odds, but I favor this move down being delayed until Friday.