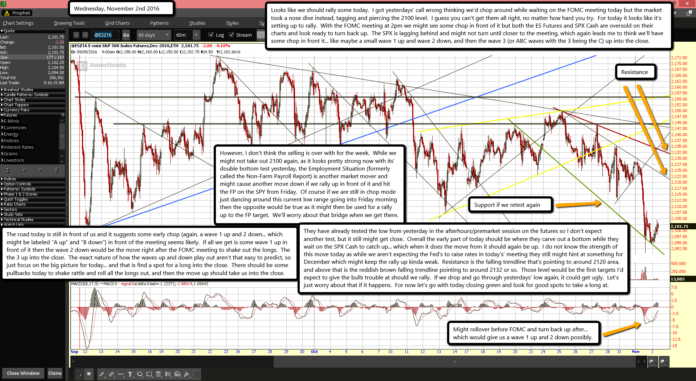 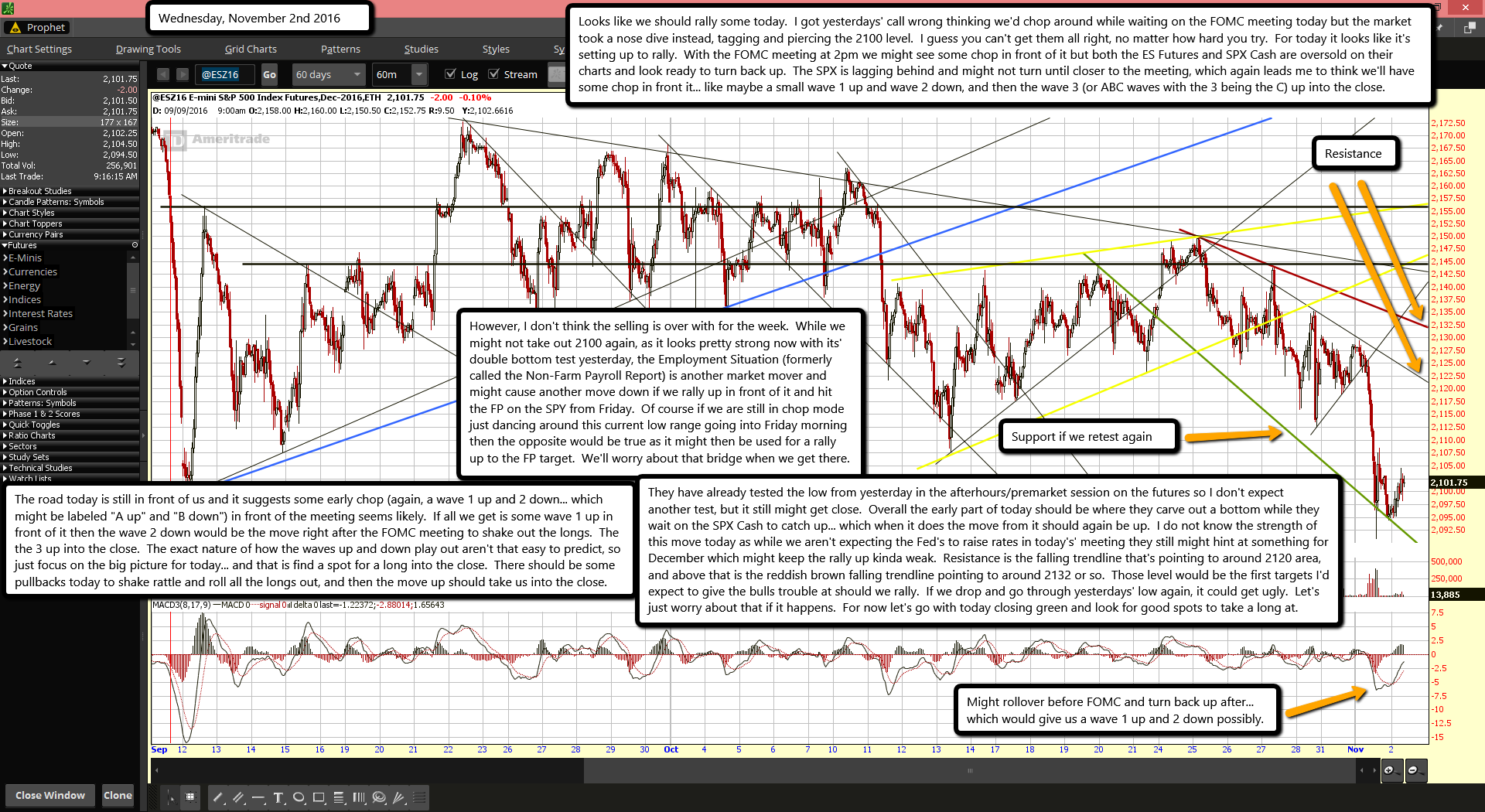 Looks like we should rally some today.  I got yesterdays' call wrong thinking we'd chop around while waiting on the FOMC meeting today but the market took a nose dive instead, tagging and piercing the 2100 level.  I guess you can't get them all right, no matter how hard you try.  For today it looks like it's setting up to rally.  With the FOMC meeting at 2pm we might see some chop in front of it but both the ES Futures and SPX Cash are oversold on their charts and look ready to turn back up.  The SPX is lagging behind and might not turn until closer to the meeting, which again leads me to think we'll have some chop in front it... like maybe a small wave 1 up and wave 2 down, and then the wave 3 (or ABC waves with the 3 being the C) up into the close.

However, I don't think the selling is over with for the week.  While we might not take out 2100 again, as it looks pretty strong now with its' double bottom test yesterday, the Employment Situation (formerly called the Non-Farm Payroll Report) is another market mover and might cause another move down if we rally up in front of it and hit the FP on the SPY from Friday.  Of course if we are still in chop mode just dancing around this current low range going into Friday morning then the opposite would be true as it might then be used for a rally up to the FP target.  We'll worry about that bridge when we get there.

The road today is still in front of us and it suggests some early chop (again, a wave 1 up and 2 down... which might be labeled "A up" and "B down") in front of the meeting seems likely.  If all we get is some wave 1 up in front of it then the wave 2 down would be the move right after the FOMC meeting to shake out the longs.  The the 3 up into the close.  The exact nature of how the waves up and down play out aren't that easy to predict, so just focus on the big picture for today... and that is find a spot for a long into the close.  There should be some pullbacks today to shake rattle and roll all the longs out, and then the move up should take us into the close.

They have already tested the low from yesterday in the afterhours/premarket session on the futures so I don't expect another test, but it still might get close.  Overall the early part of today should be where they carve out a bottom while they wait on the SPX Cash to catch up... which when it does the move from it should again be up.  I do not know the strength of this move today as while we aren't expecting the Fed's to raise rates in today's' meeting they still might hint at something for December which might keep the rally up kinda weak.  Resistance is the falling trendline that's pointing to around 2120 area, and above that is the reddish brown falling trendline pointing to around 2132 or so.  Those level would be the first targets I'd expect to give the bulls trouble at should we rally.  If we drop and go through yesterdays' low again, it could get ugly.  Let's just worry about that if it happens.  For now let's go with today closing green and look for good spots to take a long at.