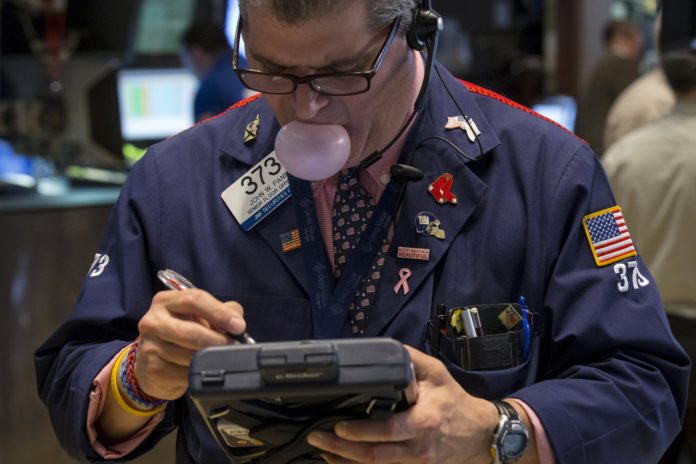 NEW YORK — The slow, steady retreat of the stock market ahead of the 2016 election continued Friday, with the market falling for a ninth straight day. Wall Street is now in its longest period of decline in more than three decades.

Investors continue to focus on the U.S. presidential election, which has become too close for comfort for some investors and has put the market on the defensive.

The last time the S&P 500 fell for nine straight days is December 1980, nearly 36 years ago. Ronald Reagan wasn't even president yet.

However the nine days' worth of declines has been relatively minor, comparatively speaking. The S&P 500 fell 9.4 percent during the 1980 nine-day losing streak, according to Howard Silverblatt at S&P Global Market Intelligence, compared with the 3.1 percent decline in this sell-off.

Investors point to one reason for the drop: Donald Trump.

With only a few days left until the election, Hillary Clinton is still leading in national polling but Trump appears to have considerably narrowed the gap, particularly in swing states. Investors like certainty, and Clinton is seen as likely to maintain the status quo. Trump's policies are less clear, and the uncertainty and uncomfortable closeness of the polls has caused jitters in financial markets.

Other portfolio managers and market strategists have made similar comments, saying that it is likely a drop would continue on Wall Street if Trump were to prevail, at least in the short term. The VIX, a measure of volatility nicknamed Wall Street's "fear gauge" because it allows investors to bet on how much the stock market will swing in the next 30 days, has surged 40 percent this week. It is at its highest level since June, when Britain voted to leave the European Union.

"No one really knows what Trump would do should he get into power, probably not even himself," said Joshua Mahony, market analyst at IG. "It is that uncertainty that is driving the market negativity that has dominated this week."

Some encouraging news on the U.S. economy did keep the market higher most of the day, but the gains faded in the last hour of trading. Traders did not want to hold positions into the weekend with the election and retreated to their usual hamlets of safety: U.S. government bonds and gold.

U.S. employers added a solid 161,000 jobs in October and raised pay sharply for many workers. The Labor Department's monthly employment report Friday sketched a picture of a resilient job market. The pace of hiring has been consistent with a decent economy. The unemployment rate fell to 4.9 percent from 5 percent. And average hourly pay took a big step up, rising 10 cents an hour to an average of $25.92. That is 2.8 percent higher than a year ago and is the sharpest 12-month rise in seven years.

"This is really good for the U.S. consumer, especially as we head into the critical holiday shopping season," Scanlon said.

With the election coming up in less than a week, the October jobs report is likely to give the Federal Reserve enough ammunition to raise interest rates at its December meeting, economists said. Fed policymakers ended a two-day meeting on Wednesday where they decided to hold rates steady.

"It seems that the only remaining obstacle to the Fed hiking in December would be a significant adverse financial market reaction to the U.S. presidential election," said Chris Williamson, chief business economist at IHS Markit, in an email.

In company news: GoPro, the maker of wearable cameras, lost 78 cents, or 6.5 percent, to $11.16. The company reported a 40 percent drop in revenue in the quarter, and gave a negative outlook for the holiday season. Like Fitbit, GoPro is showing signs of being unable to expand the audience for its product line. The stock did recover part of an earlier loss.

In energy, benchmark U.S. crude oil lost 59 cents to $44.07 a barrel on the New York Mercantile Exchange. Brent crude, the international standard, declined 77 cents to $45.58 a barrel in London.

U.S. government bond prices rose. The yield on the 10-year Treasury note fell to 1.78 percent from 1.81 percent the day before.