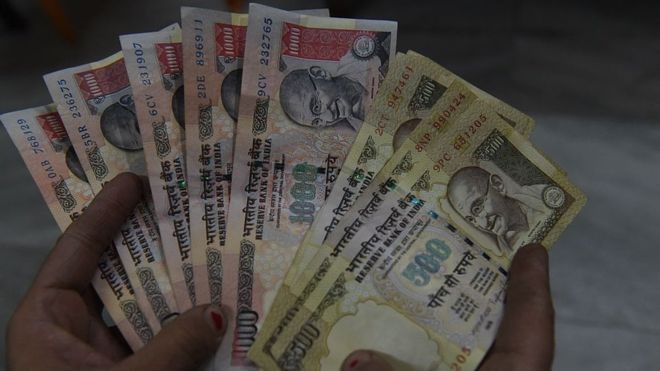 India is in the middle of an extraordinary economic experiment.

On 8 November, Prime Minister Narendra Modi gave only four hours' notice that virtually all the cash in the world's seventh-largest economy would be effectively worthless.

The Indian government likes to use the technical term "demonetization" to describe the move, which makes it sound rather dull. It isn't. This is the economic equivalent of "shock and awe".

Do not believe reports that this is primarily about bribery or terror financing, the real target is tax evasion and the policy is very daring indeed.

You can see the effects outside every bank in the country. I am in Tamil Nadu in the south of India and here, as in every other state in the country, queues of people clutching wads of currency stretch halfway down the street.

Mr Modi's "shock and awe" declaration meant that 1,000 and 500 rupee notes would no longer be valid.

These may be the largest denomination Indian notes but they are not high value by international standards - 1,000 rupees is only £12. But together the two notes represent 86% of the currency in circulation.

Think of that, at a stroke 86% of the cash in India now cannot be used.

What is more, India is overwhelmingly a cash economy, with 90% of all transactions taking place that way.

And that is the target of Mr Modi's dramatic move. Because so much business is done in cash, very few people pay tax on the money they earn.

According to figures published by the government earlier this year, in 2013 only 1% of the population paid any income tax at all.

As a result huge numbers of Indians have stashes of tax-free cash hidden away - known here as "black money".

Even the very poorest Indians have some cash savings - maybe just a few thousand rupees stored away for a daughter's wedding, the kids' school fees or - heaven forbid - an illness in the family.

But lots of Indians have much more than that.

It is not unusual for half the value of a property transaction to be paid in cash,with buyers turning up with suitcases full of 1,000 rupee notes.

The size of this shadow economy is reckoned to be as much as 20% of India's entire GDP.

Mr Modi's demonetization is designed to drive black money out of the shadows.

There is no limit to the amount that can be deposited in bank accounts until the end of December, but the government has warned that the tax authorities will be investigating any deposits above 250,000 rupees (£2,962).

Breach that limit and you will be asked to prove that you have paid tax. If you cannot, you will be charged the full amount owed, plus a fine of 200% of the tax owed. For many people that could amount to be pretty much the full value of their hidden cash.

This is brave politics. Some of the hardest hit will be the small business people and traders who are Mr Modi's core constituency. They voted for him because they believed he was the best bet to grow the economy and improve their lot. They will not be happy if he destroys their savings.

Mr Modi says he is simply delivering on his pre-election promise to tackle corruption and tax evasion.

He says he warned that he would squeeze black money out of the system and had already offered amnesties to those who declared their black money holdings.

And, so far at least, the policy seems to be popular, in spite of the long queues and the fact that much day-to-day business in India has ground to a juddering halt.

Most Indians resent the fact that many of the richest among them have used black money to evade paying their fair share of tax and are happy to suffer a few weeks of what Mr Modi called "temporary hardships" to see them face justice.

They also recognize the benefits of drawing more people into the income tax net.

India has very low rates of tax compared to many other countries. The tax-to-GDP ratio - how much tax is raised as a proportion of the output of the economy - was 17% in 2013.

The average across the economies of the Organization for Economic Co-operation and Development - a club of mostly rich nations - was over 34%.

Demonetization is part of a wider project to draw Indians into the formal economy and to get them to start paying the tax they owe.

Curbing tax evasion is part of the agenda for the "aadhaar" scheme, a giant digital database designed to give hundreds of millions of Indians a unique ID, and of the new Goods and Services tax.

And reducing tax evasion can only be good for India. The more money it raises in tax, the more it has to spend on useful stuff like roads, hospitals and schools.

The more the country spends on public goods like that, the faster the Indian economy is likely to grow - or so the argument goes.

So the big question is: will it work?

Some economists have questioned the decision to introduce the 2,000 rupee note. They say if the policy is designed to force people into the banking system why issue a higher denomination note - presumably an even more convenient vehicle for black money transactions?

But the headlines about chaos and confusion are a bit misleading.

There have been virtually no reports of violence despite the huge disruption this policy has caused.

The queues are orderly and the worst you hear are the irritated mutterings of those whose days have been wasted standing in line.

But Mr Modi needs to be careful. The new notes are in short supply and there are not enough smaller denomination notes to go around, so the banks regularly run out of cash.

That cannot go on for long without irritation turning to anger.

But some queuing may be excusable, because in one regard the policy has already been a complete success: it came as a surprise to the entire country.

Think what that means. The government managed to plan this audacious policy, printing billions of new notes without anyone letting slip what was happening.

Reportedly, even senior members of the cabinet were not told what was being planned, for fear that if word got out the entire policy would be undermined. The hoarders would have time to empty their mattresses and launder their stashes into gold or other assets.

Keeping a secret of this magnitude in India, a country that thrives on rumor and gossip, is nothing short of a triumph and surely a reasonable justification for a few hiccups along the way.