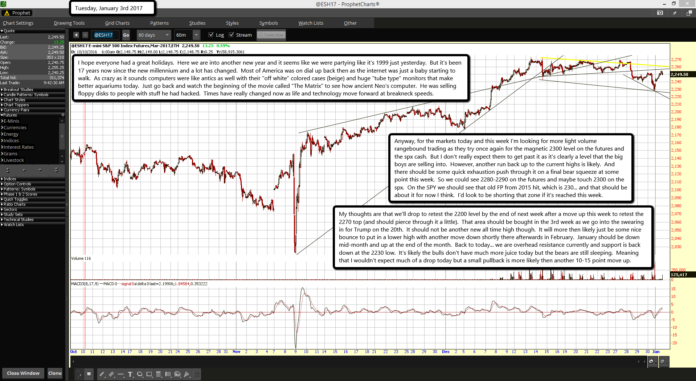 I hope everyone had a great holidays.  Here we are into another new year and it seems like we were partying like it's 1999 just yesterday.  But it's been 17 years now since the new millennium and a lot has changed.  Most of America was on dial up back then as the internet was just a baby starting to walk.  As crazy as it sounds computers were like antics as well with their "off white" colored cases (beige) and huge "tube type" monitors that make better aquariums today.  Just go back and watch the beginning of the movie called "The Matrix" to see how ancient Neo's computer.  He was selling floppy disks to people with stuff he had hacked.  Times have really changed now as life and technology move forward at breakneck speeds.

Anyway, for the markets today and this week I'm looking for more light volume rangebound trading as they try once again for the magnetic 2300 level on the futures and the spx cash.  But I don't really expect them to get past it as it's clearly a level that the big boys are selling into.  However, another run back up to the current highs is likely.  And there should be some quick exhaustion push through it on a final bear squeeze at some point this week.  So we could see 2280-2290 on the futures and maybe touch 2300 on the spx.  On the SPY we should see that old FP from 2015 hit, which is 230... and that should be about it for now I think.  I'd look to be shorting that zone if it's reached this week.

My thoughts are that we'll drop to retest the 2200 level by the end of next week after a move up this week to retest the 2270 top (and should pierce through it a little).  That area should be bought in the 3rd week as we go into the swearing in for Trump on the 20th.  It should not be another new all time high though.  It will more then likely just be some nice bounce to put in a lower high with another move down shortly there afterwards in February.  January should be down mid-month and up at the end of the month.  Back to today... we are overhead resistance currently and support is back down at the 2230 low.  It's likely the bulls don't have much more juice today but the bears are still sleeping.  Meaning that I wouldn't expect much of a drop today but a small pullback is more likely then another 10-15 point move up.