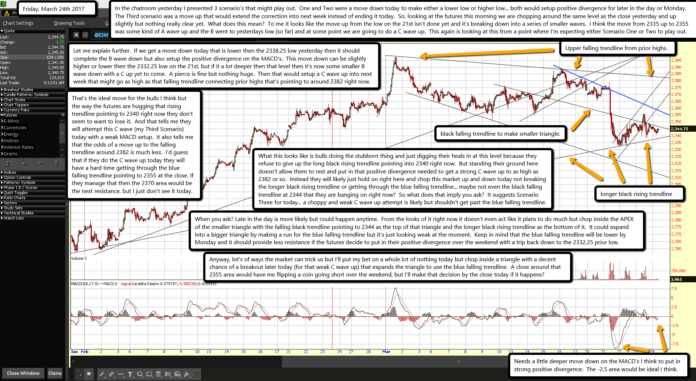 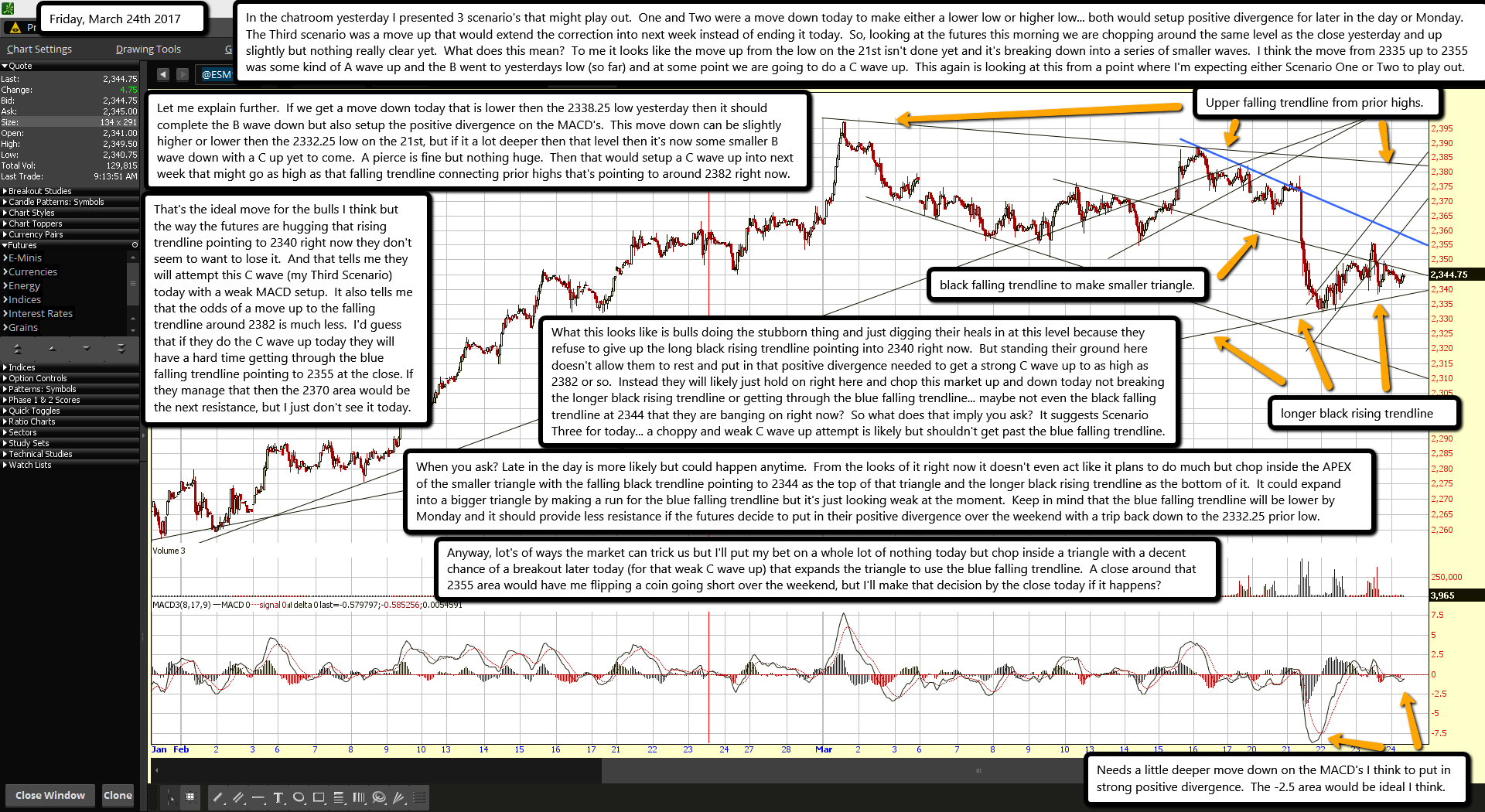 In the chatroom yesterday I presented 3 scenario's that might play out.  One and Two were a move down today to make either a lower low or higher low... both would setup positive divergence for later in the day or Monday.  The Third scenario was a move up that would extend the correction into next week instead of ending it today.  So, looking at the futures this morning we are chopping around the same level as the close yesterday and up slightly but nothing really clear yet.  What does this mean?  To me it looks like the move up from the low on the 21st isn't done yet and it's breaking down into a series of smaller waves.  I think the move from 2335 up to 2355 was some kind of A wave up and the B went to yesterdays low (so far) and at some point we are going to do a C wave up.  This again is looking at this from a point where I'm expecting either Scenario One or Two to play out.

Let me explain further.  If we get a move down today that is lower then the 2338.25 low yesterday then it should complete the B wave down but also setup the positive divergence on the MACD's.  This move down can be slightly higher or lower then the 2332.25 low on the 21st, but if it a lot deeper then that level then it's now some smaller B wave down with a C up yet to come.  A pierce is fine but nothing huge.  Then that would setup a C wave up into next week that might go as high as that falling trendline connecting prior highs that's pointing to around 2382 right now.

That's the ideal move for the bulls I think but the way the futures are hugging that rising trendline pointing to 2340 right now they don't seem to want to lose it.  And that tells me they will attempt this C wave (my Third Scenario) today with a weak MACD setup.  It also tells me that the odds of a move up to the falling trendline around 2382 is much less.  I'd guess that if they do the C wave up today they will have a hard time getting through the blue falling trendline pointing to 2355 at the close. If they manage that then the 2370 area would be the next resistance, but I just don't see it today.

What this looks like is bulls doing the stubborn thing and just digging their heals in at this level because they refuse to give up the long black rising trendline pointing into 2340 right now.  But standing their ground here doesn't allow them to rest and put in that positive divergence needed to get a strong C wave up to as high as 2382 or so.  Instead they will likely just hold on right here and chop this market up and down today not breaking the longer black rising trendline or getting through the blue falling trendline... maybe not even the black falling trendline at 2344 that they are banging on right now?  So what does that imply you ask?  It suggests Scenario Three for today... a choppy and weak C wave up attempt is likely but shouldn't get past the blue falling trendline.

When you ask? Late in the day is more likely but could happen anytime.  From the looks of it right now it doesn't even act like it plans to do much but chop inside the APEX of the smaller triangle with the falling black trendline pointing to 2344 as the top of that triangle and the longer black rising trendline as the bottom of it.  It could expand into a bigger triangle by making a run for the blue falling trendline but it's just looking weak at the moment.  Keep in mind that the blue falling trendline will be lower by Monday and it should provide less resistance if the futures decide to put in their positive divergence over the weekend with a trip back down to the 2332.25 prior low.

Anyway, lot's of ways the market can trick us but I'll put my bet on a whole lot of nothing today but chop inside a triangle with a decent chance of a breakout later today (for that weak C wave up) that expands the triangle to use the blue falling trendline.  A close around that 2355 area would have me flipping a coin going short over the weekend, but I'll make that decision by the close today if it happens?