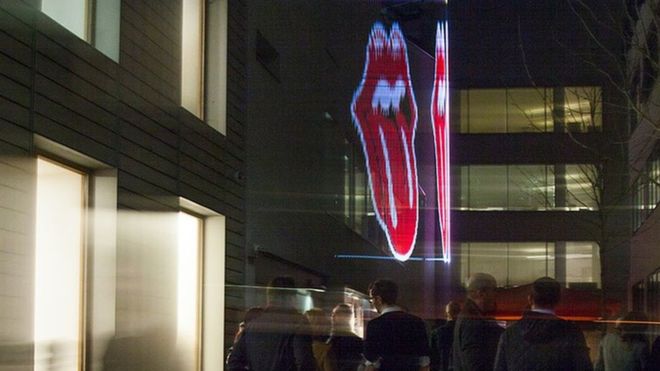 Passers-by on a London street were recently amazed to see a fleeting image of a pink tongue protruding from fruity plump lips, seemingly suspended in mid-air.

It was the famous logo for the Rolling Stones and was part of an experiment by tech start-up Lightvert.

Its technology can produce images that appear to be 200m (656ft) high, but which only exist in the eye of the viewer for a fraction of a second.

So could we be on the verge of seeing giant digital ads in our cities, similar to those featured in the seminal 1982 sci-fi film Blade Runner?

Its tech, called Echo, works by employing a narrow - no more than 200mm - strip of reflective material fixed to the side of a building. A high-power projector mounted below or above the strip beams light off the reflector directly into the viewer's eye.

The image appears momentarily, exploiting what's called the "persistence of vision" effect - the way sparklers seem to leave a trail of light when you wave them around quickly.

"Echo technology is being well received by those who have seen it to date," says Daniel Siden, Lightvert's chief executive.

"Viewers are curious as to how it works and engage with it in a way you just don't see with traditional screen media."

He is hoping that landlords will grab the opportunity to turn their buildings into revenue-generating digital billboards that are huge, yet physically unobtrusive.

These are very early days for the firm, but Mr Siden believes outdoor advertising generally is overdue a leap forward in innovation.

But would you want a billboard to target adverts at you specifically?

That's what happened in Moscow recently. Drivers approaching a digital billboard were shown ads for Jaguar's new SUV (sports utility vehicle), but only if they were driving a different make of SUV.

A machine-learning camera recognized the vehicle's make and changed the ad to target those drivers.

The billboard image was adaptive, too, showing the Jaguar against a dark background if it was night-time, or maneuvering through snow if the weather was bad.

The ads were developed by Synaps Labs and founder Aleksey Utkin says there are plans to test similar ads in the US this summer.

But won't such ads be dangerously distracting?

A study on driver distraction by the Swedish National Road and Transport Research Institute found that digital billboards attracted the gaze of drivers for much longer than other signs.

Researchers found drivers often took their eyes off the road for more than two seconds - a threshold which other studies have found to be dangerous.

Some bricks-and-mortar retailers, such as video games specialist Game, are using augmented reality (AR) tech to bring their shop windows to life.

Overlaying moving digital images on to the real world, as seen through a smartphone camera, caught the public imagination after the release of Nintendo's Pokemon Go game.

"AR is no longer just a nice-to-see technology - it has a far more extensive commercial application for brands, where results can be tracked and measured," says Richard Corps, co-founder of Ads Reality.

"We're seeing a much wider industry use of AR tech in different environments, such as in education as well as retail."

The uptake of AR in advertising is likely to increase due to the demands of a new generation of consumer, says Alex Fenton, a lecturer in digital business at Salford Business School.

"AR has lots of potential," he says. "The technology has been around for many years but had failed to capture the imagination of the mainstream.

"But with things like Pokemon Go, there's now an acceptance from young people in particular about AR and its benefits."

A few years ago retailers were excited about the potential of pinging you specific offers and ads to your phone based on where you were in the store or High Street.

But "proximity marketing" as it's called, has so far failed to take off, mainly due to the high costs of installing and maintaining Bluetooth beacons used to locate shoppers precisely.

But Devicescape eschews Bluetooth and instead tracks smartphone users via the use of wi-fi hotspots.

"Our software establishes a person's presence in a particular location based on their proximity to the wi-fi network at that location," says Owen Geddes, the firm's vice president of market development.

"It could be anywhere, a supermarket, a concert hall, or a bus."

This has resulted in a 13% rise in customers clicking through to product websites, he maintains.

Once aware of a person's location, the system triggers the delivery of a targeted ad to that smartphone containing a link to a piece of online branded content.

"It could be a discount offer for use in the shop the person is visiting, or a piece of content such as a movie trailer," says Mr Geddes.

"Importantly, it is always relevant to the consumer because of their location."

But Chris Daly, chief executive of the Chartered Institute of Marketing (CIM), says customers are instinctively skeptical about how their data is used, and thinks the industry will need to tread carefully.

CIM research has shown that 92% of customers are wary about data collection and use.

"When using adtech, marketers must keep this in mind and ensure they do not overstep their reach when making use of consumer data," says Mr Daly.

Maybe sticking to giant ads in the sky would be less controversial.