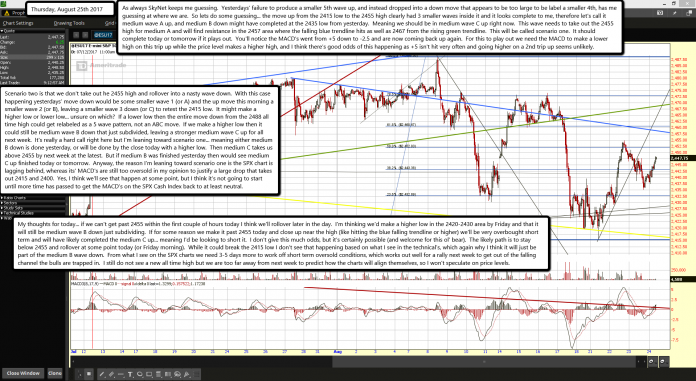 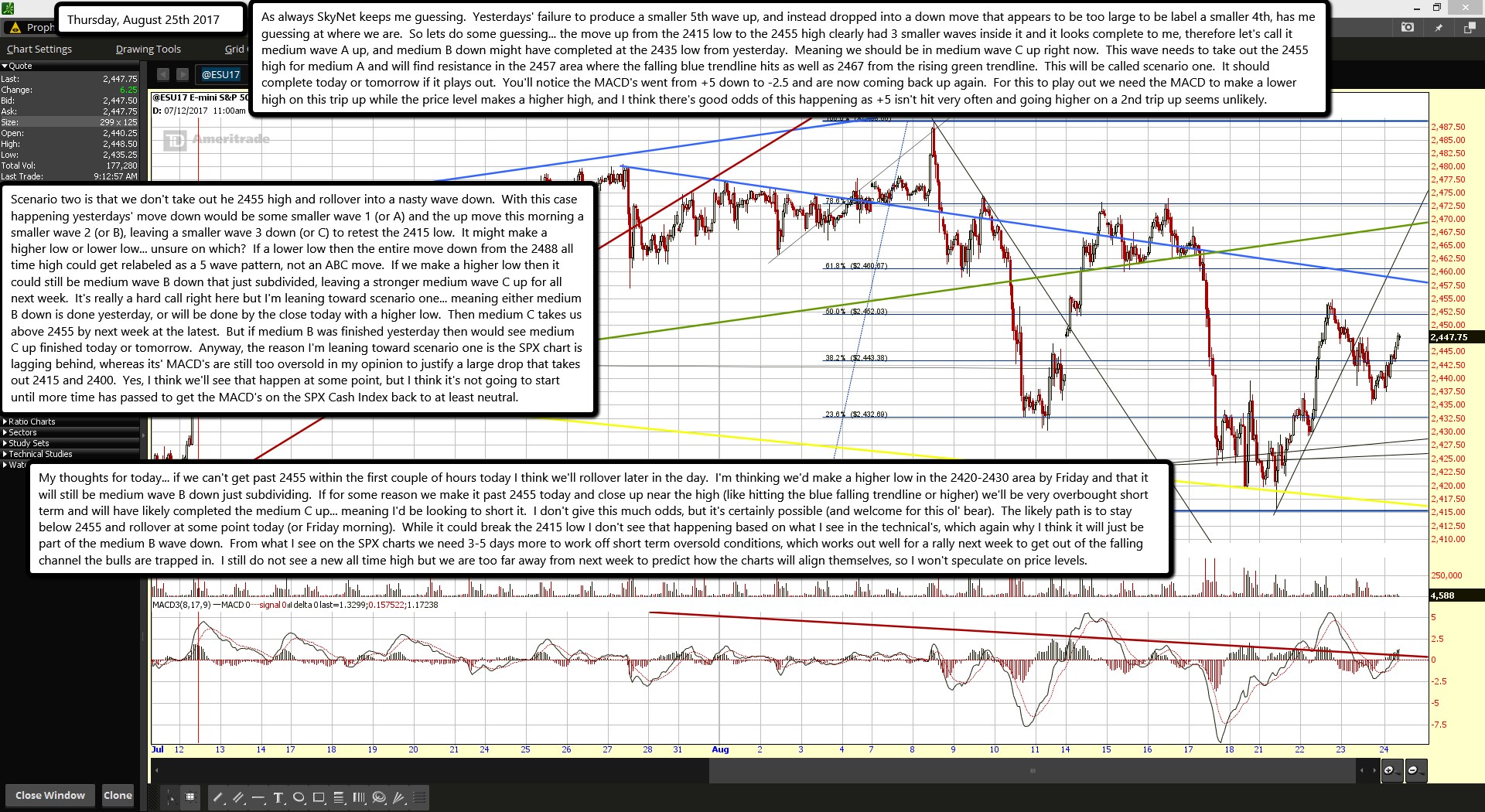 As always SkyNet keeps me guessing.  Yesterdays' failure to produce a smaller 5th wave up, and instead dropped into a down move that appears to be too large to be label a smaller 4th, has me guessing at where we are.  So lets do some guessing... the move up from the 2415 low to the 2455 high clearly had 3 smaller waves inside it and it looks complete to me, therefore let's call it medium wave A up, and medium B down might have completed at the 2435 low from yesterday.  Meaning we should be in medium wave C up right now.  This wave needs to take out the 2455 high for medium A and will find resistance in the 2457 area where the falling blue trendline hits as well as 2467 from the rising green trendline.  This will be called scenario one.  It should complete today or tomorrow if it plays out.  You'll notice the MACD's went from +5 down to -2.5 and are now coming back up again.  For this to play out we need the MACD to make a lower high on this trip up while the price level makes a higher high, and I think there's good odds of this happening as +5 isn't hit very often and going higher on a 2nd trip up seems unlikely.

Scenario two is that we don't take out he 2455 high and rollover into a nasty wave down.  With this case happening yesterdays' move down would be some smaller wave 1 (or A) and the up move this morning a smaller wave 2 (or B), leaving a smaller wave 3 down (or C) to retest the 2415 low.  It might make a higher low or lower low... unsure on which?  If a lower low then the entire move down from the 2488 all time high could get relabeled as a 5 wave pattern, not an ABC move.  If we make a higher low then it could still be medium wave B down that just subdivided, leaving a stronger medium wave C up for all next week.  It's really a hard call right here but I'm leaning toward scenario one... meaning either medium B down is done yesterday, or will be done by the close today with a higher low.  Then medium C takes us above 2455 by next week at the latest.  But if medium B was finished yesterday then would see medium C up finished today or tomorrow.  Anyway, the reason I'm leaning toward scenario one is the SPX chart is lagging behind, whereas its' MACD's are still too oversold in my opinion to justify a large drop that takes out 2415 and 2400.  Yes, I think we'll see that happen at some point, but I think it's not going to start until more time has passed to get the MACD's on the SPX Cash Index back to at least neutral.

My thoughts for today... if we can't get past 2455 within the first couple of hours today I think we'll rollover later in the day.  I'm thinking we'd make a higher low in the 2420-2430 area by Friday and that it will still be medium wave B down just subdividing.  If for some reason we make it past 2455 today and close up near the high (like hitting the blue falling trendline or higher) we'll be very overbought short term and will have likely completed the medium C up... meaning I'd be looking to short it.  I don't give this much odds, but it's certainly possible (and welcome for this ol' bear).  The likely path is to stay below 2455 and rollover at some point today (or Friday morning).  While it could break the 2415 low I don't see that happening based on what I see in the technical's, which again why I think it will just be part of the medium B wave down.  From what I see on the SPX charts we need 3-5 days more to work off short term oversold conditions, which works out well for a rally next week to get out of the falling channel the bulls are trapped in.  I still do not see a new all time high but we are too far away from next week to predict how the charts will align themselves, so I won't speculate on price levels.