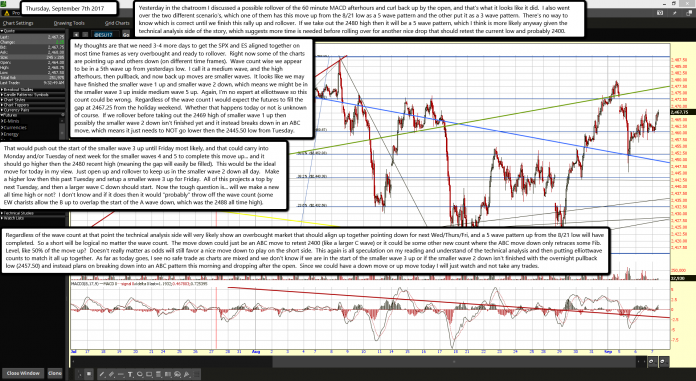 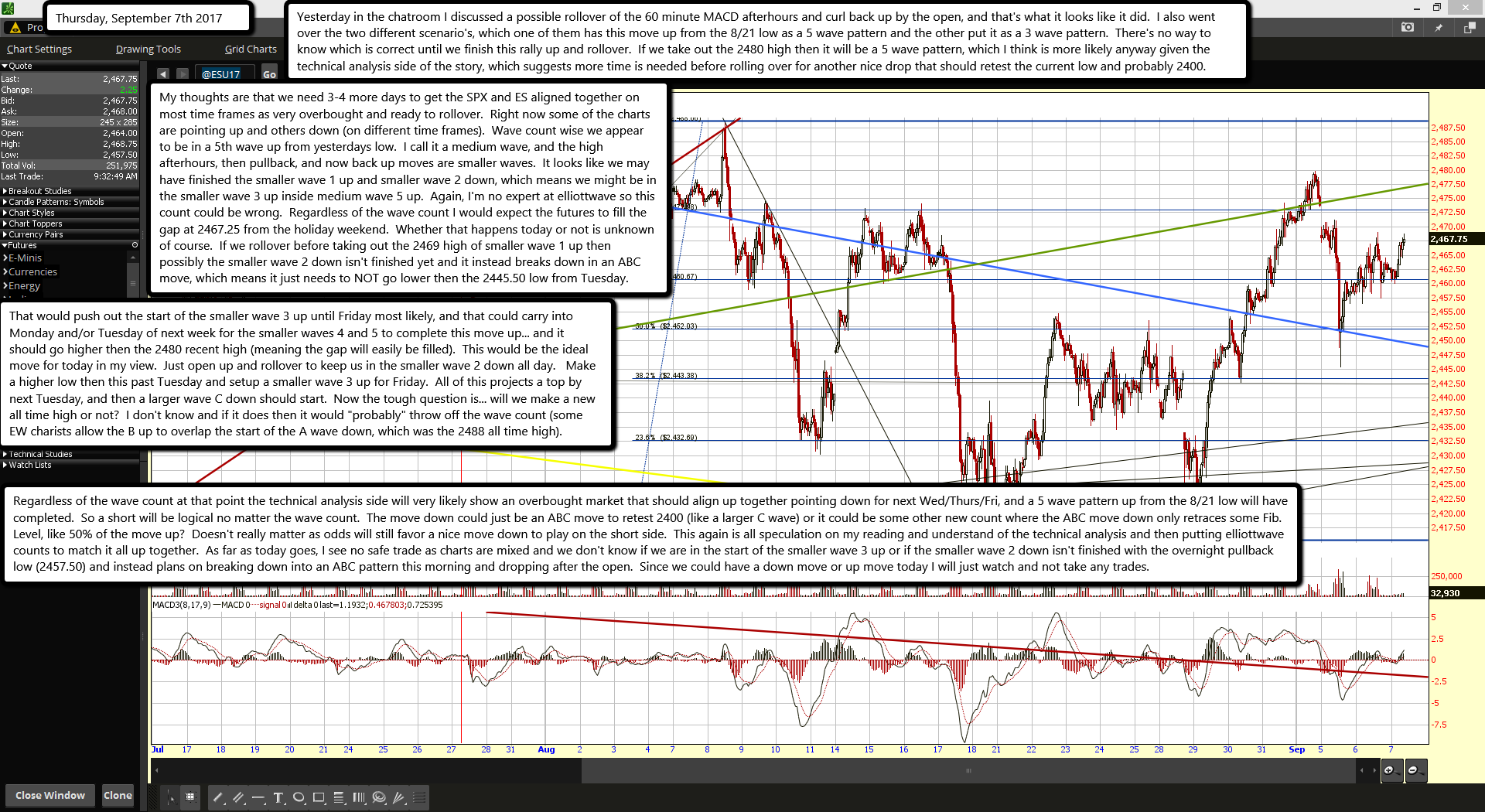 Yesterday in the chatroom I discussed a possible rollover of the 60 minute MACD afterhours and curl back up by the open, and that's what it looks like it did.  I also went over the two different scenario's, which one of them has this move up from the 8/21 low as a 5 wave pattern and the other put it as a 3 wave pattern.  There's no way to know which is correct until we finish this rally up and rollover.  If we take out the 2480 high then it will be a 5 wave pattern, which I think is more likely anyway given the technical analysis side of the story, which suggests more time is needed before rolling over for another nice drop that should retest the current low and probably 2400.

My thoughts are that we need 3-4 more days to get the SPX and ES aligned together on most time frames as very overbought and ready to rollover.  Right now some of the charts are pointing up and others down (on different time frames).  Wave count wise we appear to be in a 5th wave up from yesterdays low.  I call it a medium wave, and the high afterhours, then pullback, and now back up moves are smaller waves.  It looks like we may have finished the smaller wave 1 up and smaller wave 2 down, which means we might be in the smaller wave 3 up inside medium wave 5 up.  Again, I'm no expert at elliottwave so this count could be wrong.  Regardless of the wave count I would expect the futures to fill the gap at 2467.25 from the holiday weekend.  Whether that happens today or not is unknown of course.  If we rollover before taking out the 2469 high of smaller wave 1 up then possibly the smaller wave 2 down isn't finished yet and it instead breaks down in an ABC move, which means it just needs to NOT go lower then the 2445.50 low from Tuesday.

That would push out the start of the smaller wave 3 up until Friday most likely, and that could carry into Monday and/or Tuesday of next week for the smaller waves 4 and 5 to complete this move up... and it should go higher then the 2480 recent high (meaning the gap will easily be filled).  This would be the ideal move for today in my view.  Just open up and rollover to keep us in the smaller wave 2 down all day.   Make a higher low then this past Tuesday and setup a smaller wave 3 up for Friday.  All of this projects a top by next Tuesday, and then a larger wave C down should start.  Now the tough question is... will we make a new all time high or not?  I don't know and if it does then it would "probably" throw off the wave count (some EW charists allow the B up to overlap the start of the A wave down, which was the 2488 all time high).

Regardless of the wave count at that point the technical analysis side will very likely show an overbought market that should align up together pointing down for next Wed/Thurs/Fri, and a 5 wave pattern up from the 8/21 low will have completed.  So a short will be logical no matter the wave count.  The move down could just be an ABC move to retest 2400 (like a larger C wave) or it could be some other new count where the ABC move down only retraces some Fib. Level, like 50% of the move up?  Doesn't really matter as odds will still favor a nice move down to play on the short side.  This again is all speculation on my reading and understand of the technical analysis and then putting elliottwave counts to match it all up together.  As far as today goes, I see no safe trade as charts are mixed and we don't know if we are in the start of the smaller wave 3 up or if the smaller wave 2 down isn't finished with the overnight pullback low (2457.50) and instead plans on breaking down into an ABC pattern this morning and dropping after the open.  Since we could have a down move or up move today I will just watch and not take any trades.