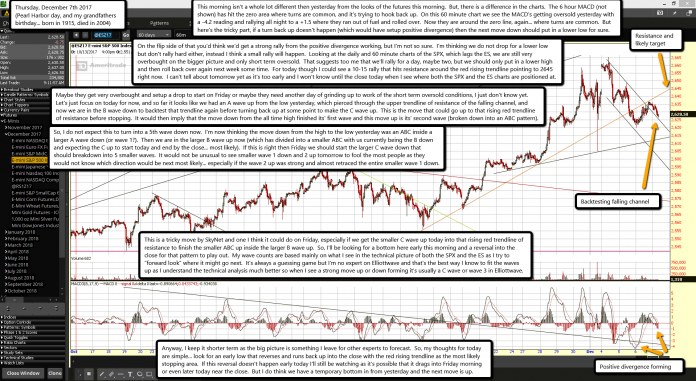 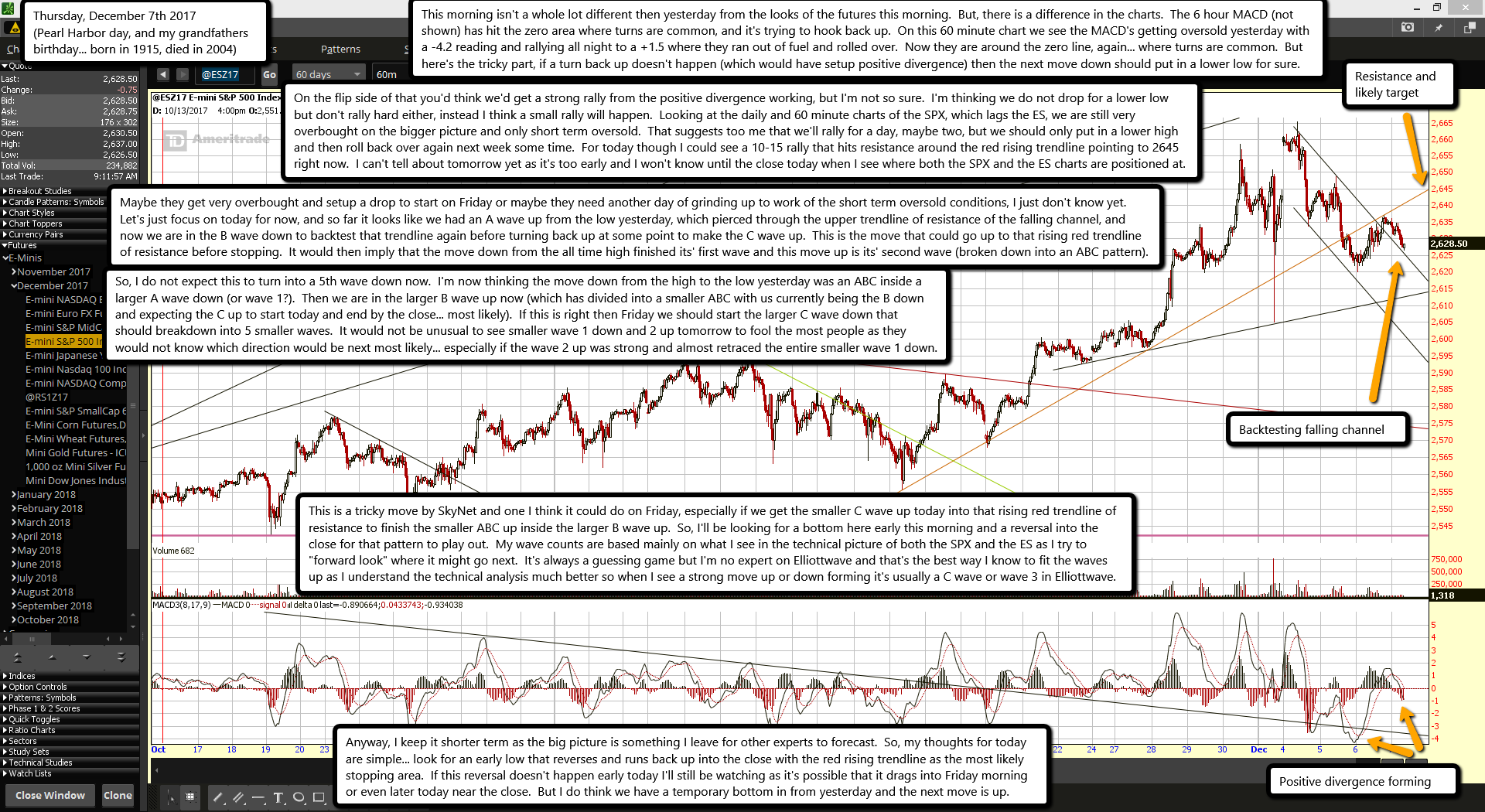 This morning isn't a whole lot different then yesterday from the looks of the futures this morning.  But, there is a difference in the charts.  The 6 hour MACD (not shown) has hit the zero area where turns are common, and it's trying to hook back up.  On this 60 minute chart we see the MACD's getting oversold yesterday with a -4.2 reading and rallying all night to a +1.5 where they ran out of fuel and rolled over.  Now they are around the zero line, again... where turns are common.  But here's the tricky part, if a turn back up doesn't happen (which would have setup positive divergence) then the next move down should put in a lower low for sure.

On the flip side of that you'd think we'd get a strong rally from the positive divergence working, but I'm not so sure.  I'm thinking we do not drop for a lower low but don't rally hard either, instead I think a small rally will happen.  Looking at the daily and 60 minute charts of the SPX, which lags the ES, we are still very overbought on the bigger picture and only short term oversold.  That suggests too me that we'll rally for a day, maybe two, but we should only put in a lower high and then roll back over again next week some time.  For today though I could see a 10-15 rally that hits resistance around the red rising trendline pointing to 2645 right now.  I can't tell about tomorrow yet as it's too early and I won't know until the close today when I see where both the SPX and the ES charts are positioned at.

Maybe they get very overbought and setup a drop to start on Friday or maybe they need another day of grinding up to work of the short term oversold conditions, I just don't know yet.  Let's just focus on today for now, and so far it looks like we had an A wave up from the low yesterday, which pierced through the upper trendline of resistance of the falling channel, and now we are in the B wave down to backtest that trendline again before turning back up at some point to make the C wave up.  This is the move that could go up to that rising red trendline of resistance before stopping.  It would then imply that the move down from the all time high finished its' first wave and this move up is its' second wave (broken down into an ABC pattern).

So, I do not expect this to turn into a 5th wave down now.  I'm now thinking the move down from the high to the low yesterday was an ABC inside a larger A wave down (or wave 1?).  Then we are in the larger B wave up now (which has divided into a smaller ABC with us currently being the B down and expecting the C up to start today and end by the close... most likely).  If this is right then Friday we should start the larger C wave down that should breakdown into 5 smaller waves.  It would not be unusual to see smaller wave 1 down and 2 up tomorrow to fool the most people as they would not know which direction would be next most likely... especially if the wave 2 up was strong and almost retraced the entire smaller wave 1 down.

This is a tricky move by SkyNet and one I think it could do on Friday, especially if we get the smaller C wave up today into that rising red trendline of resistance to finish the smaller ABC up inside the larger B wave up.  So, I'll be looking for a bottom here early this morning and a reversal into the close for that pattern to play out.  My wave counts are based mainly on what I see in the technical picture of both the SPX and the ES as I try to "forward look" where it might go next.  It's always a guessing game but I'm no expert on Elliottwave and that's the best way I know to fit the waves up as I understand the technical analysis much better so when I see a strong move up or down forming it's usually a C wave or wave 3 in Elliottwave.

Anyway, I keep it shorter term as the big picture is something I leave for other experts to forecast.  So, my thoughts for today are simple... look for an early low that reverses and runs back up into the close with the red rising trendline as the most likely stopping area.  If this reversal doesn't happen early today I'll still be watching as it's possible that it drags into Friday morning or even later today near the close.  But I do think we have a temporary bottom in from yesterday and the next move is up.