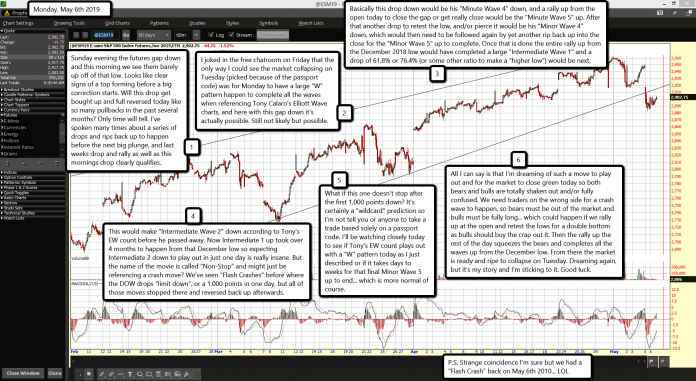 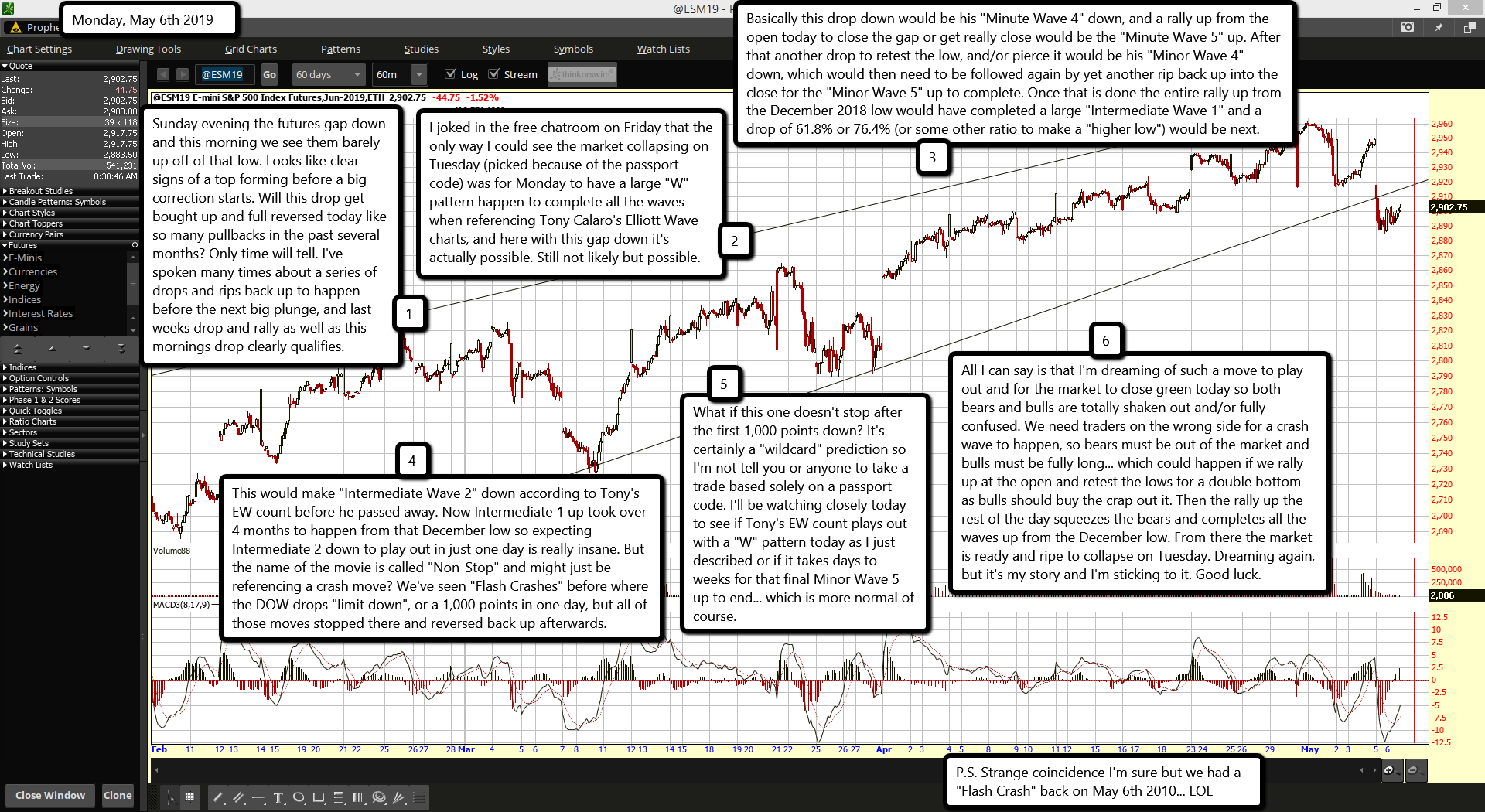 Sunday evening the futures gap down and this morning we see them barely up off of that low. Looks like clear signs of a top forming before a big correction starts. Will this drop get bought up and full reversed today like so many pullbacks in the past several months? Only time will tell. I've spoken many times about a series of drops and rips back up to happen before the next big plunge, and last weeks drop and rally as well as this mornings drop clearly qualifies.

I joked in the free chatroom on Friday that the only way I could see the market collapsing on Tuesday (picked because of the passport code) was for Monday to have a large "W" pattern happen to complete all the waves when referencing Tony Calaro's Elliott Wave charts, and here with this gap down it's actually possible. Still not likely but possible.

Basically this drop down would be his "Minute Wave 4" down, and a rally up from the open today to close the gap or get really close would be the "Minute Wave 5" up. After that another drop to retest the low, and/or pierce it would be his "Minor Wave 4" down, which would then need to be followed again by yet another rip back up into the close for the "Minor Wave 5" up to complete. Once that is done the entire rally up from the December 2018 low would have completed a large "Intermediate Wave 1" and a drop of 61.8% or 76.4% (or some other ratio to make a "higher low") would be next.

This would make "Intermediate Wave 2" down according to Tony's EW count before he passed away. Now Intermediate 1 up took over 4 months to happen from that December low so expecting Intermediate 2 down to play out in just one day is really insane. But the name of the movie is called "Non-Stop" and might just be referencing a crash move? We've seen "Flash Crashes" before where the DOW drops "limit down", or a 1,000 points in one day, but all of those moves stopped there and reversed back up afterwards.

What if this one doesn't stop after the first 1,000 points down? It's certainly a "wildcard" prediction so I'm not tell you or anyone to take a trade based solely on a passport code. I'll be watching closely today to see if Tony's EW count plays out with a "W" pattern today as I just described or if it takes days to weeks for that final Minor Wave 5 up to end... which is more normal of course.

All I can say is that I'm dreaming of such a move to play out and for the market to close green today so both bears and bulls are totally shaken out and/or fully confused. We need traders on the wrong side for a crash wave to happen, so bears must be out of the market and bulls must be fully long... which could happen if we rally up at the open and retest the lows for a double bottom as bulls should buy the crap out it. Then the rally up the rest of the day squeezes the bears and completes all the waves up from the December low. From there the market is ready and ripe to collapse on Tuesday. Dreaming again, but it's my story and I'm sticking to it. Good luck.