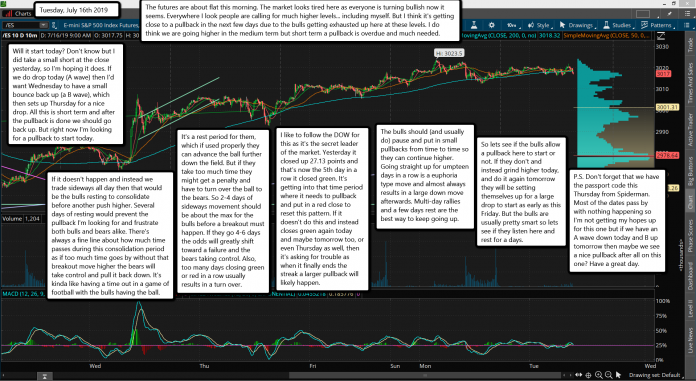 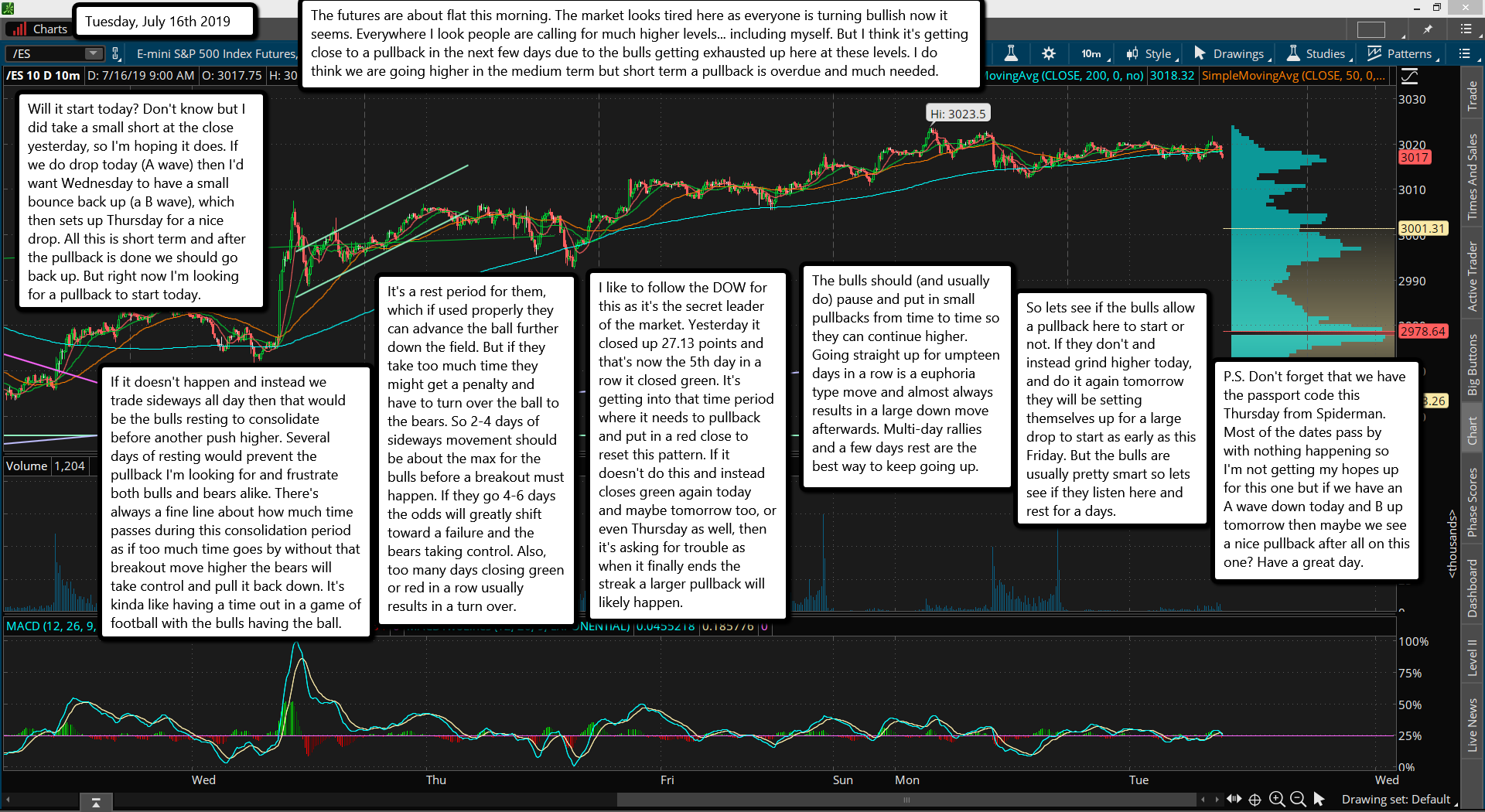 The futures are about flat this morning. The market looks tired here as everyone is turning bullish now it seems. Everywhere I look people are calling for much higher levels... including myself. But I think it's getting close to a pullback in the next few days due to the bulls getting exhausted up here at these levels. I do think we are going higher in the medium term but short term a pullback is overdue and much needed.

Will it start today? Don't know but I did take a small short at the close yesterday, so I'm hoping it does. If we do drop today (A wave) then I'd want Wednesday to have a small bounce back up (a B wave), which then sets up Thursday for a nice drop. All this is short term and after the pullback is done we should go back up. But right now I'm looking for a pullback to start today.

If it doesn't happen and instead we trade sideways all day then that would be the bulls resting to consolidate before another push higher. Several days of resting would prevent the pullback I'm looking for and frustrate both bulls and bears alike. There's always a fine line about how much time passes during this consolidation period as if too much time goes by without that breakout move higher the bears will take control and pull it back down. It's kinda like having a time out in a game of football with the bulls having the ball.

It's a rest period for them, which if used properly they can advance the ball further down the field. But if they take too much time they might get a penalty and have to turn over the ball to the bears. So 2-4 days of sideways movement should be about the max for the bulls before a breakout must happen. If they go 4-6 days the odds will greatly shift toward a failure and the bears taking control. Also, too many days closing green or red in a row usually results in a turn over.

I like to follow the DOW for this as it's the secret leader of the market. Yesterday it closed up 27.13 points and that's now the 5th day in a row it closed green. It's getting into that time period where it needs to pullback and put in a red close to reset this pattern. If it doesn't do this and instead closes green again today and maybe tomorrow too, or even Thursday as well, then it's asking for trouble as when it finally ends the streak a larger pullback will likely happen.

The bulls should (and usually do) pause and put in small pullbacks from time to time so they can continue higher. Going straight up for umpteen days in a row is a euphoria type move and almost always results in a large down move afterwards. Multi-day rallies and a few days rest are the best way to keep going up.

So lets see if the bulls allow a pullback here to start or not. If they don't and instead grind higher today, and do it again tomorrow they will be setting themselves up for a large drop to start as early as this Friday. But the bulls are usually pretty smart so lets see if they listen here and rest for a days.

P.S. Don't forget that we have the passport code this Thursday from Spiderman. Most of the dates pass by with nothing happening so I'm not getting my hopes up for this one but if we have an A wave down today and B up tomorrow then maybe we see a nice pullback after all on this one? Have a great day.