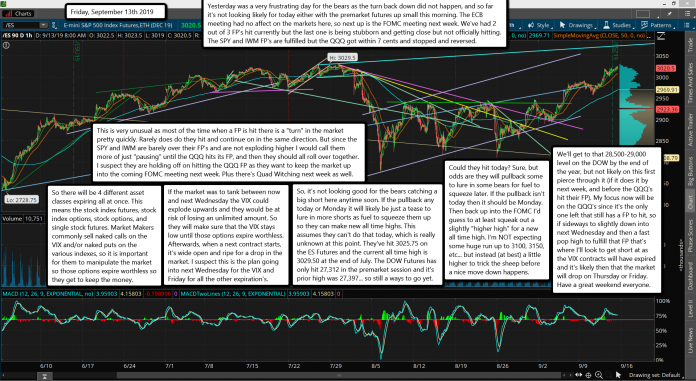 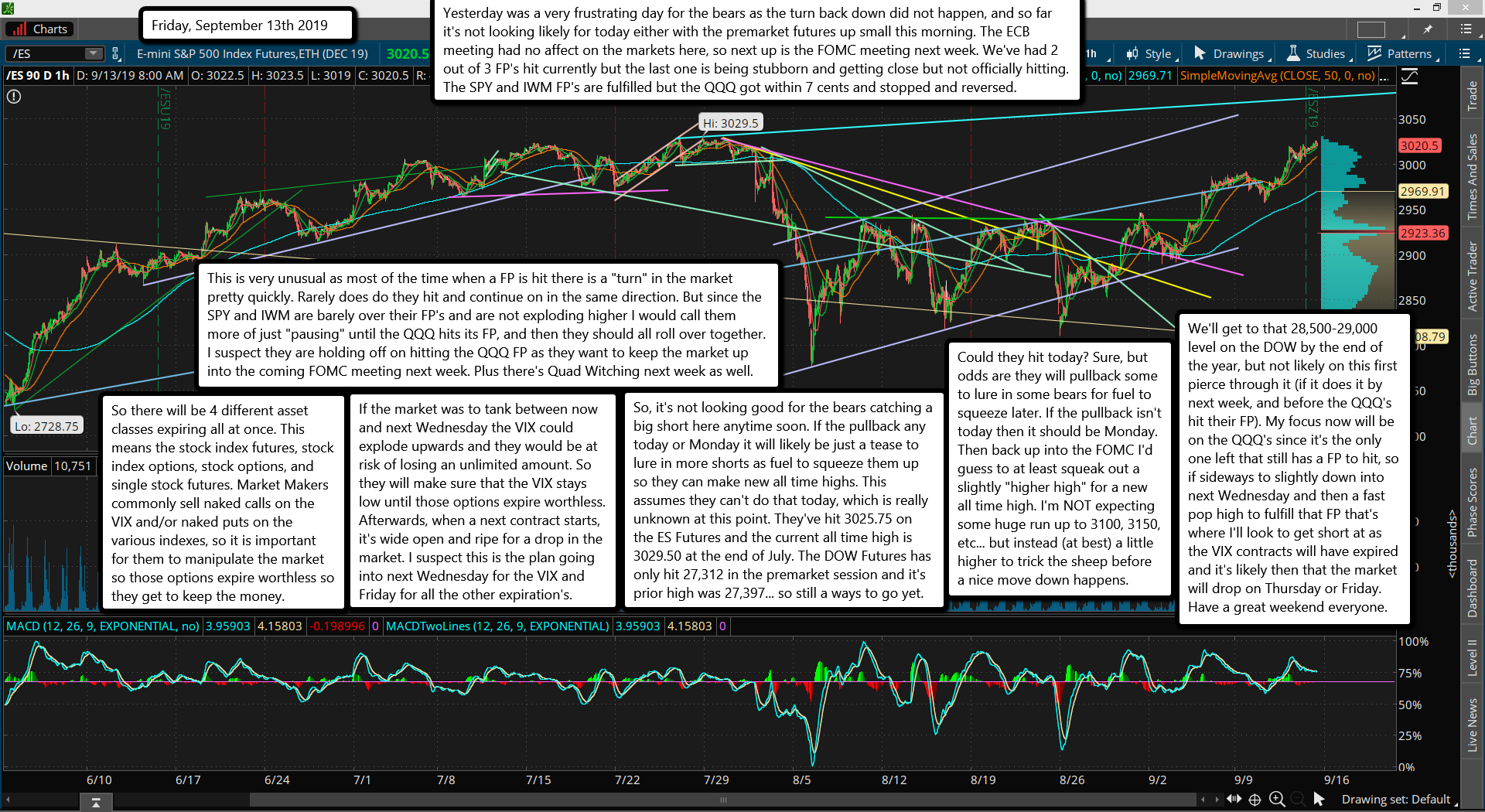 Yesterday was a very frustrating day for the bears as the turn back down did not happen, and so far it's not looking likely for today either with the premarket futures up small this morning. The ECB meeting had no affect on the markets here, so next up is the FOMC meeting next week. We've had 2 out of 3 FP's hit currently but the last one is being stubborn and getting close but not officially hitting. The SPY and IWM FP's are fulfilled but the QQQ got within 7 cents and stopped and reversed.

This is very unusual as most of the time when a FP is hit there is a "turn" in the market pretty quickly. Rarely does do they hit and continue on in the same direction. But since the SPY and IWM are barely over their FP's and are not exploding higher I would call them more of just "pausing" until the QQQ hits its FP, and then they should all roll over together. I suspect they are holding off on hitting the QQQ FP as they want to keep the market up into the coming FOMC meeting next week. Plus there's Quad Witching next week as well.

So there will be 4 different asset classes expiring all at once. This means the stock index futures, stock index options, stock options, and single stock futures. Market Makers commonly sell naked calls on the VIX and/or naked puts on the various indexes, so it is important for them to manipulate the market so those options expire worthless so they get to keep the money.

If the market was to tank between now and next Wednesday the VIX could explode upwards and they would be at risk of losing an unlimited amount. So they will make sure that the VIX stays low until those options expire worthless. Afterwards, when a next contract starts, it's wide open and ripe for a drop in the market. I suspect this is the plan going into next Wednesday for the VIX and Friday for all the other expiration's.

So, it's not looking good for the bears catching a big short here anytime soon. If the pullback any today or Monday it will likely be just a tease to lure in more shorts as fuel to squeeze them up so they can make new all time highs. This assumes they can't do that today, which is really unknown at this point. They've hit 3025.75 on the ES Futures and the current all time high is 3029.50 at the end of July. The DOW Futures has only hit 27,312 in the premarket session and it's prior high was 27,397... so still a ways to go yet.

Could they hit today? Sure, but odds are they will pullback some to lure in some bears for fuel to squeeze later. If the pullback isn't today then it should be Monday. Then back up into the FOMC I'd guess to at least squeak out a slightly "higher high" for a new all time high. I'm NOT expecting some huge run up to 3100, 3150, etc... but instead (at best) a little higher to trick the sheep before a nice move down happens.

We'll get to that 28,500-29,000 level on the DOW by the end of the year, but not likely on this first pierce through it (if it does it by next week, and before the QQQ's hit their FP). My focus now will be on the QQQ's since it's the only one left that still has a FP to hit, so if sideways to slightly down into next Wednesday and then a fast pop high to fulfill that FP that's where I'll look to get short at as the VIX contracts will have expired and it's likely then that the market will drop on Thursday or Friday. Have a great weekend everyone.