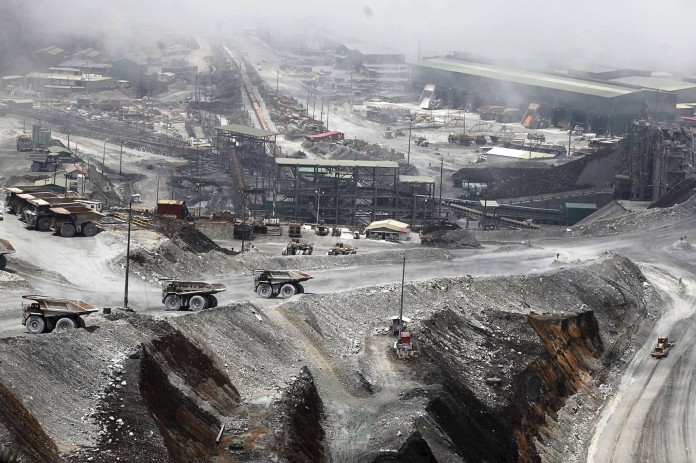 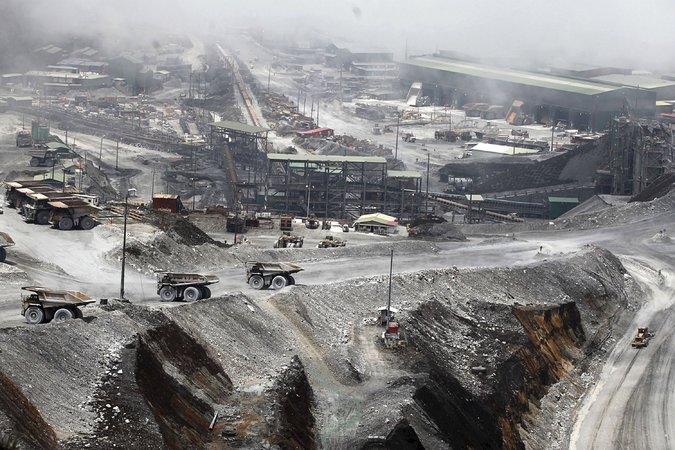 The Grasberg copper and gold mine complex near Timika, in the eastern region of Papua, Indonesia, is among Freeport-McMoRan’s “trove of treasures.”

For a look at the damage that the plunging price of commodities — especially oil — is inflicting on the global economy, consider the plight of the venerable Freeport-McMoRan.

Freeport has long embodied the American swagger that conquered the West in the 19th century and enabled it to find significant copper and gold deposits in some of the world’s most remote regions. In 2007, flush from rising commodity prices, it bought Phelps Dodge, which traces its roots to pre-Civil War cotton traders and laid railroads on the American frontier. Its board, which has included a Whitney, a Rockefeller and Henry Kissinger, was long a who’s who of the corporate establishment.

About three years ago, to diversify its business, Freeport plunged into oil and gas under the leadership of its chairman, the Texas wildcatter James Moffett. With oil prices then nearing $100 a barrel, the company bought two companies, McMoRan Exploration and Plains Exploration and Production. The deals cost $20 billion, and to get them done Freeport sharply increased its debt load. (McMoRan had been spun off from Freeport in 1994.)

When some investors questioned the rationale and ethics of the deal, Mr. Moffett highlighted his own management skills with characteristic bravado. “I don’t want to pat us on the back, but we’ve got extraordinary capabilities,” he said at the time. “We found the biggest gold and copper mine in the world, and I’ve said it three or four times, but I got the right to say it. Joe Namath said it isn’t bragging if you can do it.”

The deal now looks like a major blunder. In December 2010, Freeport’s stock peaked at over $60 a share. This week it dropped below $4.

“The stock is trading like they’re going to file for bankruptcy,” said Paul Massoud, a mining analyst with Stifel Nicolaus who in August of 2014 downgraded Freeport shares.

Freeport is hardly alone in getting battered by plummeting commodities prices. Banks’ earnings this month have taken a hit as they have marked down the value of their loans to energy companies. Many of the world’s largest commodities producers, including oil-rich countries like Saudi Arabia and Venezuela, or corporate behemoths like the Swiss company Glencore, are suffering after borrowing large sums of money at ultralow interest rates during the commodities boom.

In previous price slumps, commodities producers cut back. But this time, many have continued to flood the market with oil and copper even at depressed prices, confounding many economists. One explanation is that they need to generate the cash to meet debt obligations. In its last quarter, Freeport actually increased its oil production and barely cut back on copper despite falling prices.

Now, Freeport, which is based in Phoenix, needs to reduce its heavy debt burden, which at more than $20 billion is more than four times the company’s current market value of $4.8 billion. Once an aggressive bidder for trophy assets, it now finds itself in the position of a desperate seller. It’s also cutting jobs and slashing capital spending, the lifeblood of any mining company.

For its most recent quarter, Freeport reported a quarterly loss of $3.8 billion, bringing its loss for the first nine months of its fiscal year to $8.2 billion, mostly because of write-downs in the value of its oil and gas assets.

When it last announced earnings in October, Freeport said its 2016 projections were based on an average oil price of $56 a barrel. This week oil dropped below $27 a barrel, though it rallied on Thursday. So expectations for Freeport’s latest quarter and full year results, which will be announced next week, are grim. (A Freeport spokesman said the company couldn’t comment because of the impending earnings release.)

Under pressure from the activist investor Carl Icahn, who disclosed an 8.5 percent stake in Freeport last fall, Mr. Moffett, 76, stepped down as chairman late last month.

Freeport “is getting hit by everything,” said Anthony Young, a mining analyst at the Macquarie Group. “It’s the fall in copper prices and metals, the plunge in oil and natural gas, and the amount of debt on the balance sheet. It’s going to take some pretty dramatic steps by management to right this ship.”

Still, however much Freeport is being battered by market forces beyond its control, it’s hard to feel too bad for the company’s management and shareholders, given how many of its woes seem self-inflicted during a woeful lapse in corporate governance standards.

As a pure mining company that had endured over a century of commodity booms and busts, Freeport had long shunned debt and never acted as if it expected good times to last indefinitely — time-honored notions that Mr. Moffett and his allies appear to have discarded when they pushed into oil and gas. Investors “loved this company for so long because they never took on much debt and never hedged,” Mr. Massoud said. “They were a pure proxy for commodities. No matter the price, they’d survive.”

Many Freeport investors were furious over the company’s audacious debt-financed move into oil and gas. As Evy Hambro, chief investment officer for BlackRock’s natural resources team, said in the company’s investor call to discuss the deal: “I haven’t heard anything on this call that in any way justifies why these companies should be put together, and I find it incredibly disappointing that as a management team, you’ve chosen to break the trust with investors from what the business was that we chose to invest in.”

The deal was all the more troubling given that it was rife with conflicts of interest. At the time, Mr. Moffett was McMoRan’s chief executive while also serving as Freeport’s chairman. (The “Mo” in the company’s name stands for Moffett.)

Freeport’s chief executive, Richard Adkerson, was McMoRan’s co-chairman. Nine Freeport directors owned stock in McMoRan totaling about 6 percent of the shares. Freeport agreed to buy McMoRan for $2.1 billion — a 74 percent premium over its market price before the deal was struck. Mr. Moffett himself was paid $73 million.

Moreover, Plains owned 31 percent of McMoRan, enough to block any deal. Freeport eliminated that possibility when it bought Plains. And James Flores, Plains’s chief executive, who now runs Freeport’s oil and gas operations, was also a director of McMoRan. He made $200 million on the deal.

“Would it be possible to find out if anybody on the call from your side is not conflicted?” Mr. Hambro asked pointedly during the conference call.

Freeport officials denied any wrongdoing and justified the deal by saying that committees of independent directors at all the companies approved the transactions. Last year it agreed to pay $137.5 million to resolve shareholder lawsuits over conflicts of interest related to the deal. (All costs to the individual executives were covered by directors’ liability insurance, the company said.)

Even now, Mr. Moffett hasn’t exactly been sent packing. He received a severance package valued at $79.4 million, according to company filings. He keeps the title of chairman emeritus and will be paid $1.5 million a year as a consultant. Mr. Adkerson remains Freeport’s chief executive.

There’s no easy way out for Freeport. The company earlier said it would explore selling all or part of its oil and gas assets, but given current market conditions, any sale would be at fire sale prices. With its stock so depressed, it doesn’t make sense to raise more money in the equity markets, and it would be hard pressed to borrow more, either from banks or in the debt market (where some of its bonds are already trading at distressed levels).

Freeport still owns what Mr. Moffett called its “trove of treasures” — the Grasberg gold and copper operations in Indonesia; the Morenci copper mine in Arizona; and majority stakes in the Cerro Verde copper mine in Peru and Tenke Fungurume, the largest copper mine in the Democratic Republic of Congo. Freeport recently valued its interest in Grasberg alone at $16.2 billion.

“There’s a lot of concern about the company’s long-term solvency,” Mr. Young of Macquarie said. “But they do have some valuable assets that could alleviate the pressure.” He said investors were anxiously waiting to see what strategy the company unveils next week.

Freeport’s salvation may come from a rally in the commodities markets. But just as prices looked as if they would never go down during the commodities boom, they now look as if they won’t go up substantially any time soon. “Unfortunately for them, if you extend these low commodity prices indefinitely,” the Stifel analyst Mr. Massoud said, “there’s zero equity value there.”

Correction: January 21, 2016 An earlier version of this article misstated the date when Paul Massoud, a mining analyst, downgraded the shares of Freeport-McMoRan. It was August of 2014, not August of 2015.