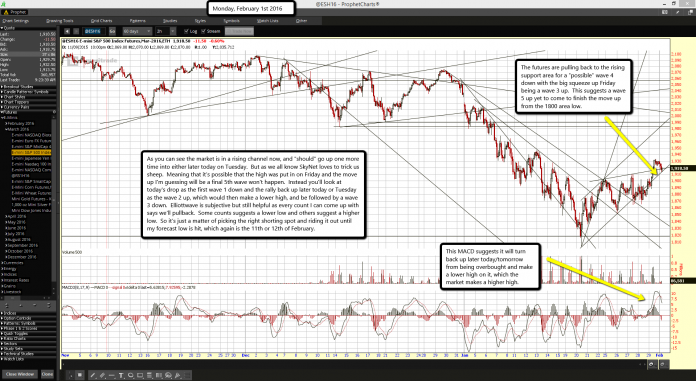 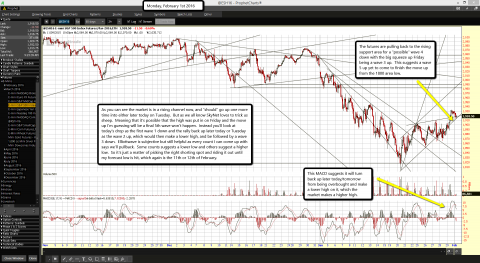 The futures are pulling back to the rising support area for a "possible" wave 4 down with the big squeeze up Friday being a wave 3 up.  This suggests a wave 5 up yet to come to finish the move up from the 1800 area low.

This MACD suggests it will turn back up later today/tomorrow from being overbought and make a lower high on it, which the market makes a higher high.

As you can see the market is in a rising channel now, and "should" go up one more time into either later today on Tuesday.  But as we all know SkyNet loves to trick us sheep.  Meaning that it's possible that the high was put in on Friday and the move up I'm guessing will be a final 5th wave won't happen.  Instead you'll look at today's drop as the first wave 1 down and the rally back up later today or Tuesday as the wave 2 up, which would then make a lower high, and be followed by a wave 3 down.  Elliottwave is subjective but still helpful as every count I can come up with says we'll pullback.  Some counts suggests a lower low and others suggest a higher low.  So it's just a matter of picking the right shorting spot and riding it out until my forecast low is hit, which again is the 11th or 12th of February.