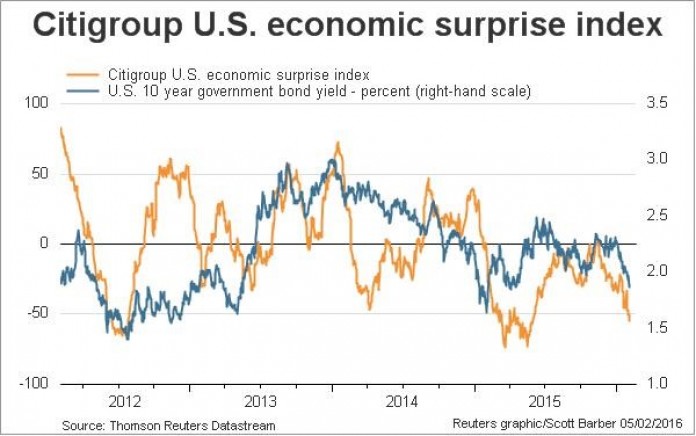 Federal Reserve Chair Janet Yellen's task is growing more intractable every day. And believe it or not, Friday's jobs report featuring a drop in the unemployment rate to 4.9 percent has made it only more difficult.

Back in December, encouraged by labor market gains and solid economic data, her policymaking committee raised interest rates by 0.25 percent, the first hike since 2006. What followed has been an embarrassment: Global financial market turmoil, a wipeout in crude oil prices, a stalling U.S. economy and a collapse in bond market expectations about inflation and rate hikes.

The Fed's December rate hike forecast fingered four quarter-point increases in 2016. However, the futures market assigns only a 50 percent chance of any rate hikes this year. As Yellen heads into her semi-annual testimony to Congress on Wednesday, it's an understatement to say she faces a difficult policy environment.

Whether she can navigate it successfully will determine the path of stock prices, oil prices, the dollar, job growth and the strength of GDP growth in the months to come.

The problem is that the labor market seems to be tightening -- despite a comedown in the pace of U.S. economic growth as well as slowing corporate earnings growth. The labor tightness is resulting from falling productivity, fewer qualified applicants and the still-low percentage of Americans in the labor force. Wage inflation is also on the rise.

Taken together, all of this feels a little "stagflation-y" because it suggests the economy could get the job and wage gains we've been waiting for, but in a way that's bad for the stock market and the overall economy.

If that dynamic deepens, Yellen will have no easy policy prescriptions. Should she continue the rate hikes based on job market nearing full employment and the specter of higher wage inflation? Or should she delay based on crude oil's drag on inflation, the stronger dollar's drag on earnings and a volatile stock market's drag on financial conditions and economic growth?

Just look at the jobs report. The unemployment rate has fallen below the 5 percent threshold for the first time since the recession ended, hitting 4.9 percent for January. But nonfarm payrolls increased only 151,000 vs. the 190,000 gain expected and well below the 236,000 average of the last six months. A mixed picture.

Average hourly earnings were a bright spot, rising 0.5 percent on a monthly basis vs. the expectation of a 0.3 percent rise. The annual hourly earnings increased by 2.5 percent from 2.2 percent previously, but this merely returns wage gains to the pace seen over the past year.

And yet, according to the Citigroup Economic Surprise Index, which measures how U.S. economic data is coming in relative to expectations, the economy has slowed to a pace not seen since late 2014. This is down sharply from the highs at the end of 2015 when the Fed decided, based on the economic data, to raise interest rates.

Clearly, the situation has changed.

We'll know more when Yellen makes her testimony. We'll also get another reading on the jobs market when the Job Openings and Labor Turnover Survey is released on Tuesday. Friday will bring updates on retail sales, business inventories and consumer sentiment.

Deutsche Bank analysts expect Yellen to stress patience in waiting to see further improvement on the inflation front given fresh weakness in crude oil prices as well as the tightening of financial conditions from the recent market volatility. Paul Ashworth at Capital Economics believes the Fed won't raise rates until June at the earliest. He sees monetary policy depending on fears about a collapse in China and a U.S. economic slowdown, as well as a leveling off of commodity prices.

But don't discount the rising possibility that the Fed won't hike rates at all this year as Yellen awaits confirmation that job growth, inflation and energy prices are going to stabilize first.