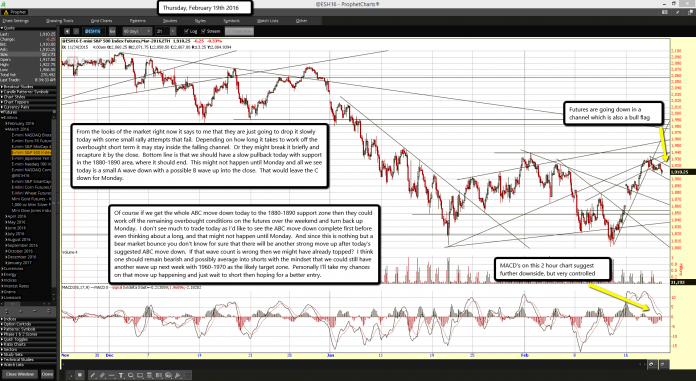 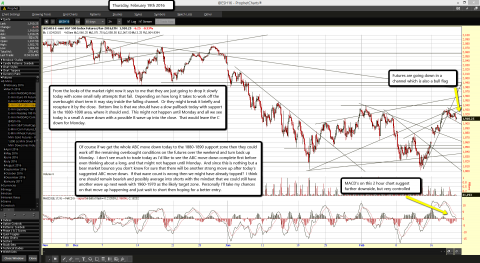 From the looks of the market right now it says to me that they are just going to drop it slowly today with some small rally attempts that fail.  Depending on how long it takes to work off the overbought short term it may stay inside the falling channel.  Or they might break it briefly and recapture it by the close.  Bottom line is that we should have a slow pullback today with support in the 1880-1890 area, where it should end.  This might not happen until Monday and all we see today is a small A wave down with a possible B wave up into the close.  That would leave the C down for Monday.

Of course if we get the whole ABC move down today to the 1880-1890 support zone then they could work off the remaining overbought conditions on the futures over the weekend and turn back up Monday.  I don't see much to trade today as I'd like to see the ABC move down complete first before even thinking about a long, and that might not happen until Monday.  And since this is nothing but a bear market bounce you don't know for sure that there will be another strong move up after today's suggested ABC move down.  If that wave count is wrong then we might have already topped?  I think one should remain bearish and possibly average into shorts with the mindset that we could still have another wave up next week with 1960-1970 as the likely target zone.  Personally I'll take my chances on that move up happening and just wait to short then hoping for a better entry.