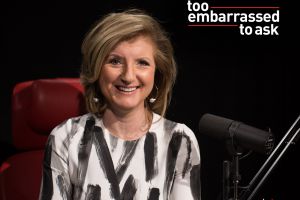 Arianna Huffington, the co-founder and editor in chief of the Huffington Post (and an Uber investor already), has joined Uber’s board of directors, company CEO Travis Kalanick announced today.

As a director, Huffington is in the company of a number of key investors as well as executives like Benchmark general partner Bill Gurley, Uber co-founder Garrett Camp, head of global operations Ryan Graves and former policy and communications head David Plouffe.

The announcement closes out a month of collaborations between long-time friends Kalanick and Huffington, who have spent the better part of April working on projects that bring together Huffington’s work on raising awareness of the risks of sleep deprivation and Kalanick’s work with Uber.

At the beginning of April, the two announced that the Huffington Post was teaming up with Uber and Toyota to end drowsy driving — which Huffington called a silent epidemic. As part of that partnership, Huffington spent a day taking rides with Uber passengers to talk about her book “The Sleep Revolution” and later that day discussed the benefits of sleep with Kalanick in a Facebook Live video.

Huffington brings an “emotional intelligence” the company is lacking to the table, Kalanick wrote in a blog post. Indeed, Huffington’s involvement in the company may help Uber in its quest to soften its image.

From acknowledging its need to “grow up” to rolling out programs that benefit drivers like a feature that enables drivers to find the cheapest fuel options, Uber has made a concerted effort in the past two years to refine its image from that of a ruthless and shadowy tech company to one that is growing and learning from its mistakes.

Whether Uber is disingenuous in its efforts, Huffington’s place on the board may help — to an extent.

Disability advocates, who have worked to shed light on the company’s lack of accessible vehicles, are already questioning whether Huffington’s role on Uber’s board will interfere with HuffPo’s coverage of the company.

“Arianna Huffington’s appointment to Uber’s board raises questions about whether the Huffington Post will provide objective coverage of Uber’s discrimination against wheelchair users in New York,” Dustin Jones, the outspoken founder of United for Equal Access New York, wrote in a statement. “Ms. Huffington must immediately recuse herself from any coverage of Uber or ride-sharing and the Huffington Post must work to expose Uber’s refusal to serve people in wheelchairs.”

“Anything less would be a failure of journalistic ethics for the sole benefit of a multi-billion-dollar company,” he continued.