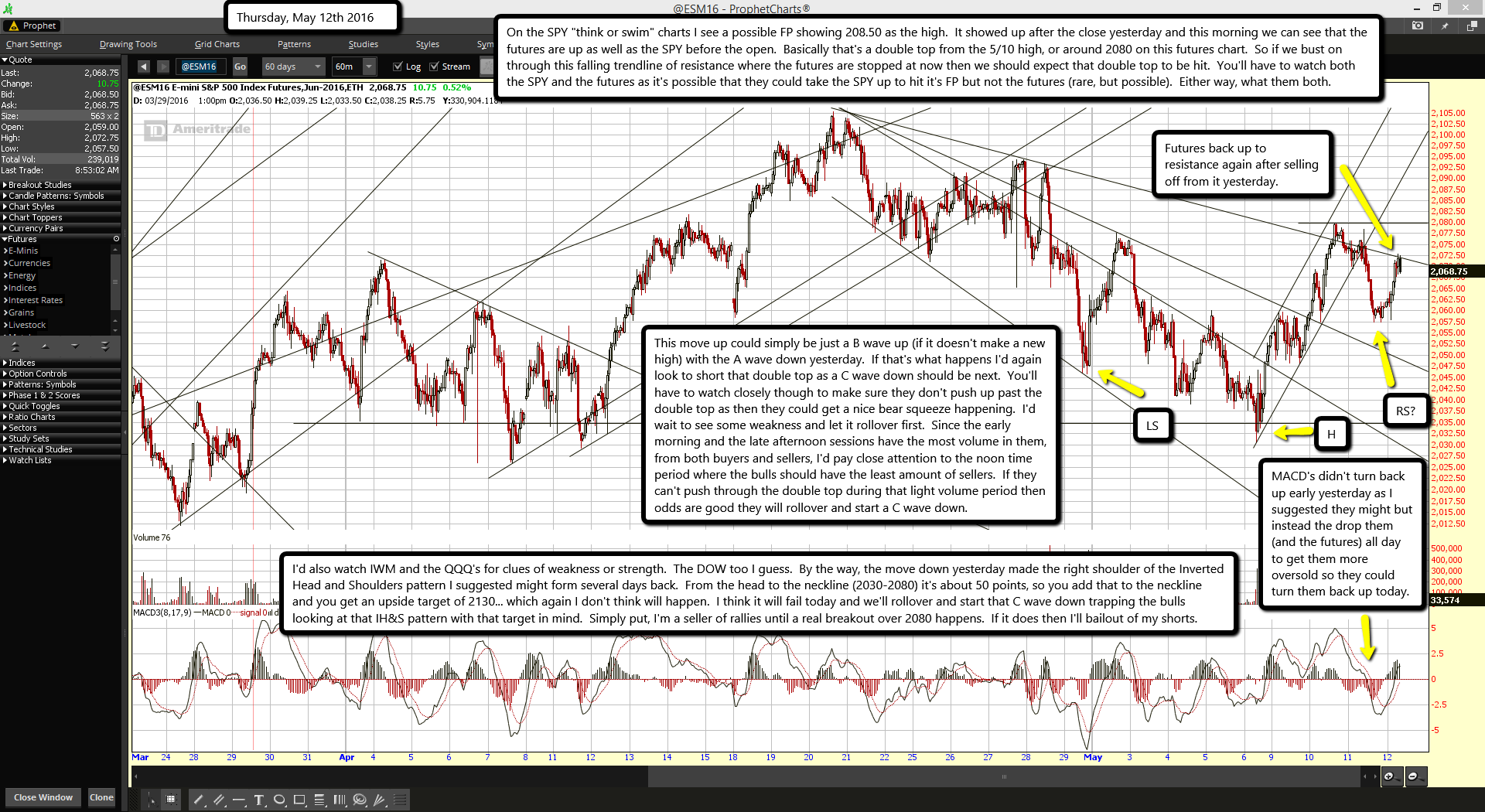 Futures back up to resistance again after selling off from it yesterday.

MACD's didn't turn back up early yesterday as I suggested they might but instead the drop them (and the futures) all day to get them more oversold so they could turn them back up today.

On the SPY "think or swim" charts I see a possible FP showing 208.50 as the high.  It showed up after the close yesterday and this morning we can see that the futures are up as well as the SPY before the open.  Basically that's a double top from the 5/10 high, or around 2080 on this futures chart.  So if we bust on through this falling trendline of resistance where the futures are stopped at now then we should expect that double top to be hit.  You'll have to watch both the SPY and the futures as it's possible that they could take the SPY up to hit it's FP but not the futures (rare, but possible).  Either way, what them both.

This move up could simply be just a B wave up (if it doesn't make a new high) with the A wave down yesterday.  If that's what happens I'd again look to short that double top as a C wave down should be next.  You'll have to watch closely though to make sure they don't push up past the double top as then they could get a nice bear squeeze happening.  I'd wait to see some weakness and let it rollover first.  Since the early morning and the late afternoon sessions have the most volume in them, from both buyers and sellers, I'd pay close attention to the noon time period where the bulls should have the least amount of sellers.  If they can't push through the double top during that light volume period then odds are good they will rollover and start a C wave down.

I'd also watch IWM and the QQQ's for clues of weakness or strength.  The DOW too I guess.  By the way, the move down yesterday made the right shoulder of the Inverted Head and Shoulders pattern I suggested might form several days back.  From the head to the neckline (2030-2080) it's about 50 points, so you add that to the neckline and you get an upside target of 2130... which again I don't think will happen.  I think it will fail today and we'll rollover and start that C wave down trapping the bulls looking at that IH&S pattern with that target in mind.  Simply put, I'm a seller of rallies until a real breakout over 2080 happens.  If it does then I'll bailout of my shorts.