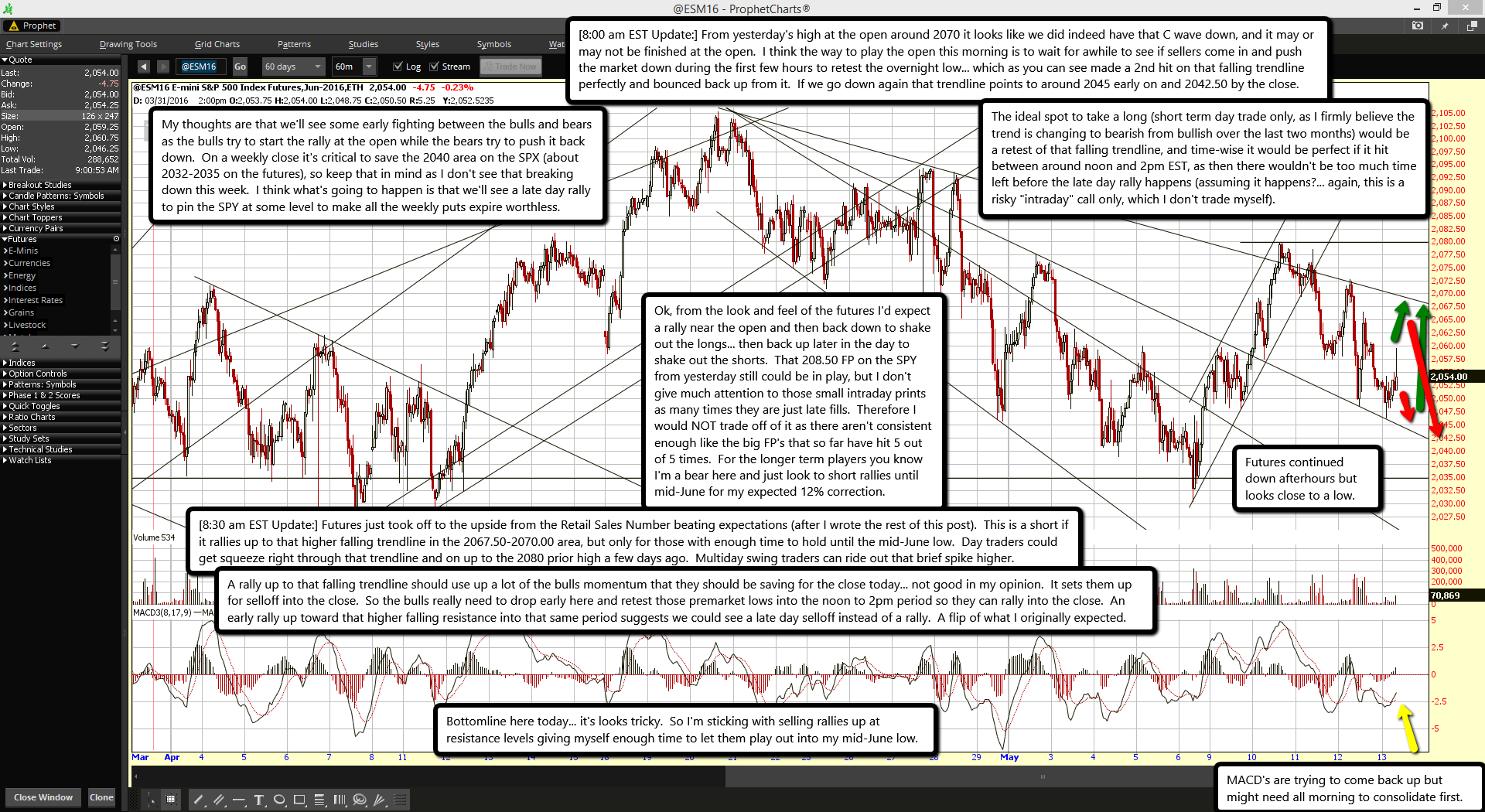 Futures continued down afterhours but looks close to a low.

MACD's are trying to come back up but might need all morning to consolidate first.

[8:00 am EST Update:] From yesterday's high at the open around 2070 it looks like we did indeed have that C wave down, and it may or may not be finished at the open.  I think the way to play the open this morning is to wait for awhile to see if sellers come in and push the market down during the first few hours to retest the overnight low... which as you can see made a 2nd hit on that falling trendline perfectly and bounced back up from it.  If we go down again that trendline points to around 2045 early on and 2042.50 by the close.

My thoughts are that we'll see some early fighting between the bulls and bears as the bulls try to start the rally at the open while the bears try to push it back down.  On a weekly close it's critical to save the 2040 area on the SPX (about 2032-2035 on the futures), so keep that in mind as I don't see that breaking down this week.  I think what's going to happen is that we'll see a late day rally to pin the SPY at some level to make all the weekly puts expire worthless.

The ideal spot to take a long (short term day trade only, as I firmly believe the trend is changing to bearish from bullish over the last two months) would be a retest of that falling trendline, and time-wise it would be perfect if it hit between around noon and 2pm EST, as then there wouldn't be too much time left before the late day rally happens (assuming it happens?... again, this is a risky "intraday" call only, which I don't trade myself).

Ok, from the look and feel of the futures I'd expect a rally near the open and then back down to shake out the longs... then back up later in the day to shake out the shorts.  That 208.50 FP on the SPY from yesterday still could be in play, but I don't give much attention to those small intraday prints as many times they are just late fills.  Therefore I would NOT trade off of it as there aren't consistent enough like the big FP's that so far have hit 5 out of 5 times.  For the longer term players you know I'm a bear here and just look to short rallies until mid-June for my expected 12% correction.

[8:30 am EST Update:] Futures just took off to the upside from the Retail Sales Number beating expectations (after I wrote the rest of this post).  This is a short if it rallies up to that higher falling trendline in the 2067.50-2070.00 area, but only for those with enough time to hold until the mid-June low.  Day traders could get squeeze right through that trendline and on up to the 2080 prior high a few days ago.  Multiday swing traders can ride out that brief spike higher.

A rally up to that falling trendline should use up a lot of the bulls momentum that they should be saving for the close today... not good in my opinion.  It sets them up for selloff into the close.  So the bulls really need to drop early here and retest those premarket lows into the noon to 2pm period so they can rally into the close.  An early rally up toward that higher falling resistance into that same period suggests we could see a late day selloff instead of a rally.  A flip of what I originally expected.

Bottomline here today... it's looks tricky.  So I'm sticking with selling rallies up at resistance levels giving myself enough time to let them play out into my mid-June low.