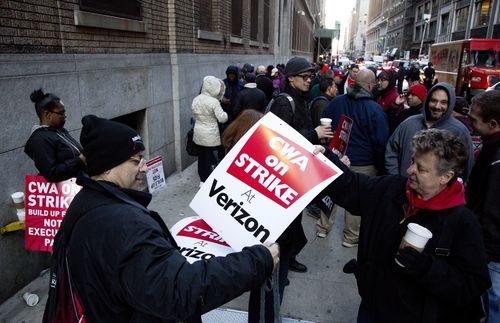 Verizon workers picket in front of a company facility in New York.

Nearly 40,000 employees -- members of the Communications Workers of America and International Brotherhood of Electrical Workers -- have been on strike for about a month.

But Verizon CEO Lowell McAdam, CWA president Chris Shelton and IBEW president Lonnie Stephenson met in person with Perez in Washington on Sunday after he contacted the company and unions last week. After "an open, frank and constructive dialogue," the parties decided to return to the bargaining table, the department said.

“The best way to resolve this labor dispute is at the bargaining table, and I am heartened by the parties’ mutual commitment to get back to immediate discussions and work toward a new contract,” Perez said in a statement. “I was singularly impressed by the parties’ appreciation that time is of the essence, and their strong commitment to use the collective bargaining process to reach a mutually beneficial resolution.

Union members, employed by Verizon from Massachusetts to Virginia, have decried Verizon for outsourcing and increasing demands on workers despite burgeoning profits. Verizon officials say that employee health care and retirement compromises are needed to help manage costs.