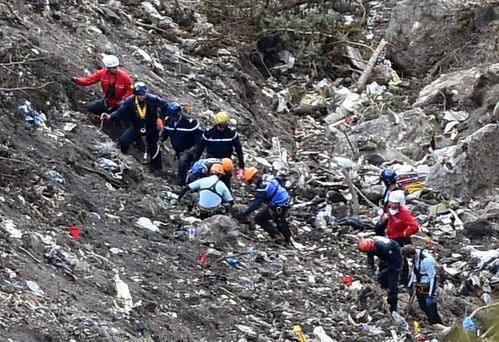 French gendarmes and investigators working through scattered debris on March 26, 2015, at the crash site of the Germanwings Airbus A320 that crashed in the French Alps above the southeastern town of Seyne.(Photo: ANNE-CHRISTINE POUJOULAT, AFP/Getty Images)

WASHINGTON – The Federal Aviation Administration announced steps Thursday to encourage pilots with mental-health problems to seek treatment, in the wake of an intentional Germanwings crash a year ago.

But the FAA won't initiate psychological testing for pilots or change the locked cockpit doors that were hardened after the terrorist attacks Sept. 11, 2001.

“What we’re trying to do is create an environment where people are self-reporting and looking out for each other,” he said. “We need to do more to remove the stigma surrounding mental illness in the aviation industry so pilots are more likely to self-report, get treated and return to work."

The goal is break down resistance to seeking treatment because pilots can be grounded for certain medical problems or medications.

"Most pilots have conditions that are in fact treatable," Huerta said.

The recommendations came from a committee of industry experts who reviewed pilot testing after the crash of Germanwings flight 9525 on March 24, 2015. The pilot, Andreas Lubitz, intentionally crashed intentionally into the Alps while flying from Barcelona to Dusseldorf, killing 150 people aboard.

The number of intentional airline crashes is exceedingly small, with perhaps a half-dozen in the last three decades. But they draw tremendous attention and scrutiny.

In at least two cases, EgyptAir flight 990 crash off Massachusetts in 1999 and SilkAir flight 185 in Indonesia in 1997, investigators detected pilots fighting for control of a plane before it crashed. But in cases like Germanwings, the pilot acted alone, and Huerta said the U.S. policy to always have two people in the cockpit is intended to always have crew members evaluating each other for health problems.

"That backstops what might be going on in an individual’s personal situation," Huerta said.

Dr. Michael Berry, FAA’s deputy federal air surgeon who co-chaired the committee, said psychological testing for suicide or homicide is a snapshot on the day of a test and wouldn’t be effective in annual medical exams for younger pilots or six-month exams for pilots at least 40 years old

“We did not see the benefit of doing that,” Berry said.

Doctors ask general questions about how pilots are feeling during the tests, and Huerta said training will be enhanced to spot signs of mental illness. Questionnaires that are part of the exams ask pilots about mental-health problems and prescription usage.

“There is a lot of self-reporting that they are supposed to put on there,” Berry said. “They’re really not looking for severe psychiatric disease.”

Capt. Paul Morell, vice president for safety at American Airlines who co-chaired the committee, employee-assistance programs that have focused on drug and alcohol abuse among airline workers will be enhanced to focus on mental-health referrals.

Capt. Joe DePete, who has flown for 37 years for FedEx and the military and who represented the Air Line Pilots Association on the committee, said pilots are regularly checked medically, with simulators and other grading that are “very stringent.”

“My career is a psychological exam,” DePete said. “We are the most scrutinized profession in the world.”