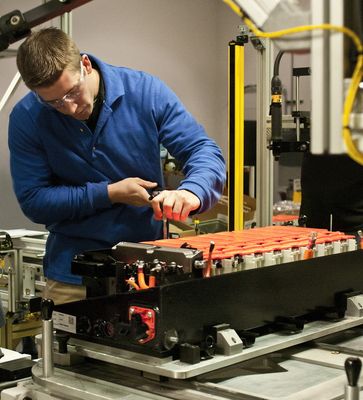 Johnson Controls said Monday it plans to invest $445 million to double production capacity of its advanced car batteries in North America and also to build a new battery plant in China.

The investments will help JCI boost output of its absorbent glass mat batteries -- a technologically advanced car battery that is more expensive than a conventional lead acid battery but can better handle the strain of frequent engine restarts and the ever-increasing electrical load placed on car batteries.

The two investments -- $245 million to double its battery output and $200 million for a factory in China -- are part of a larger, five-year plan.

JCI said it plans to invest a total of $780 million globally by 2020 to expand production of absorbent glass mat batteries.

“Johnson Controls is the leader in battery manufacturing and we are committed to investing in our factories, our employees and our customers, to ensure that we remain the leader when it comes to innovative technology, quality products and strong customer partnerships,” said Joe Walicki, president of Johnson Controls Power Solutions.

Absorbent glass mat batteries are used in vehicles with start-stop technology, which can tax a car battery because the electrical system still uses energy from the battery when the vehicle turns off.

JCI told analysts today it expects the percentage batteries sold globally that will be paired with start-stop systems will increase from about 24% now to more than 60% by 2020.

That growth will occur because start-stop systems exist, work well, are easy to adopt in new vehicles and will help automakers meet stricter regulations.

"We expect start-stop to become ubiquitous," Walicki said. "We are going to reach the tipping point on start-stop capacity between now and 2020."

In China, Johnson Controls is forming a joint venture with Binzhou Bohai Piston, an auto parts affiliate of Beijing Automotive Industry Group. The new battery plant in China will be built and operated by that joint venture Binzhou, Shandong Province, and will eventually employ 650 people.

The new plant will be JCI's fourth in China.

According to JCI, 50%, or about 15 million new vehicles, will be equipped with start-stop functionality in China by 2020.

JCI also predicts that China will represent 50% of all automotive battery growth over the next 10 years.

JCI, which also makes heating and cooling systems for buildings and energy storage systems, is in the middle of trying to complete a merger with Ireland-based Tyco, a provider of electronic security systems, fire protection, detection and suppression systems, sprinklers and fire extinguishers.

The deal is designed to create a company that will focus primarily on products for buildings, from controls and heating and cooling equipment to security and fire suppression equipment. The new company is projected to have $30 billion in annual sales.

JCI also is simultaneously planning to spin off its automotive seating business into a standalone company called Adient.