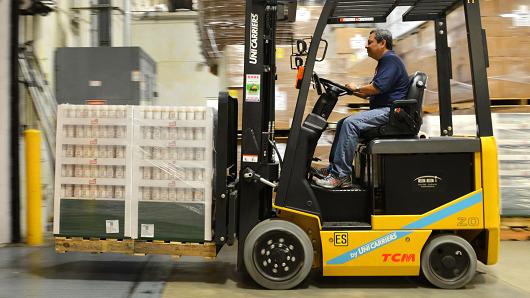 A forklift operator loads a semi-trailer with pallets of seasoning at the Badia Spices factory in Doral, Florida.

U.S. wholesale inventories unexpectedly rose in June on gains in stocks of farm products and other nondurable goods, suggesting an upward revision to the second-quarter economic growth estimate.

The Commerce Department said on Tuesday that wholesale inventories increased 0.3 percent after having been initially estimated as unchanged. Inventories for May were revised up to show a 0.2 percent rise instead of the previously reported 0.1 percent gain.

The component of wholesale inventories that goes into the calculation of GDP—wholesale stocks excluding autos—increased 0.3 percent in June. That would imply a mild upward revision to the second-quarter GDP growth estimate.

Sales at wholesalers jumped 1.9 percent after rising 0.7 percent in May. In June, it would have taken wholesalers 1.33 months to clear shelves, down from 1.35 months in May.

What are markets doing? Check here.