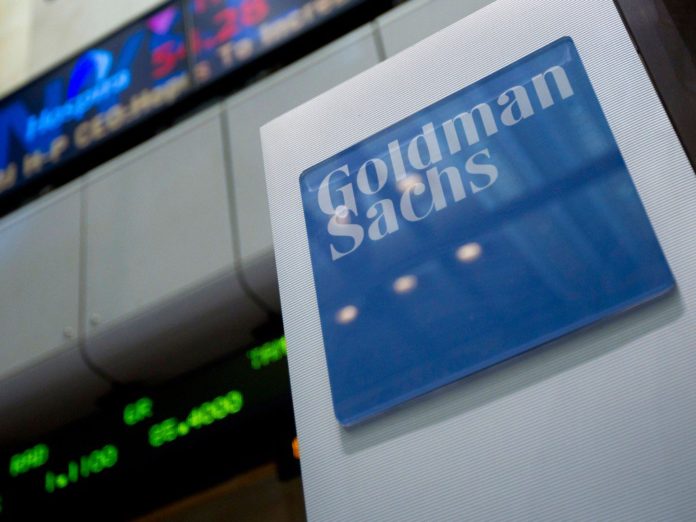 The first “plant layoff” notice came in February: 43 people would lose their jobs.

The second arrived six weeks later, increasing the cuts to 109 workers. Then a third, in April, for 146 more. And a fourth, in June: 98. Three more notices followed, including 20 dismissals announced last week.

Like all big companies in New York State, the firm is required to file a “WARN notice” with state authorities when it plans to shed large numbers of employees as part of a plant closing, or “mass layoffs” involving 250 or more. Employers also must inform the state of smaller reductions under certain circumstances, and Goldman Sachs cited a “plant layoff” in each case. Last week’s notice brings this year’s job-cut tally to 443.With the run of notices, seven since the start of the year, the bank has signaled its intention to dismiss hundreds of employees in New York without placing a single, headline-grabbing number on the overall reduction, already its largest since 2008. The company’s approach differs from competitors, including Morgan Stanley, who have shown a preference for larger, one-time cuts.

“When there’s a big number, people right away get that something is happening at that firm — it’s a negative,” said Jeanne Branthover, a partner at New York-based executive-search firm DHR International. “This is more, ‘We’re having layoffs and we don’t want to explain it.’ It’s more under the radar screen.”

The 20 people in the latest reduction were notified either this month or last, according to a person with direct knowledge of the matter, who asked not to be identified discussing staffing decisions. The terminations will take place between Nov. 7 and Jan. 5, according to the notice posted on the state Labor Department’s website. The workers aren’t represented by a union.

Gena Palumbo, a managing director and the bank’s global head of employment law, is the sole Goldman Sachs contact listed on each of this year’s WARN notices. In 2008, the firm dismissed 900 people in New York in two different sets of cuts as the financial crisis raged. A spokesman for the bank declined to comment. 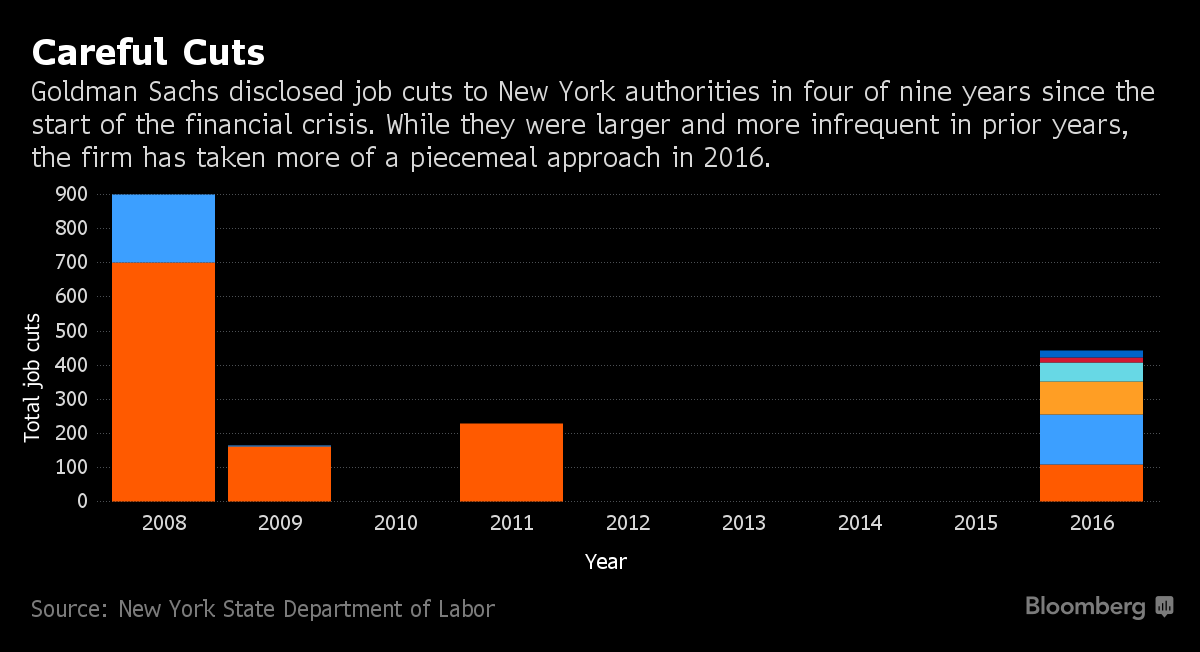 Goldman Sachs set aside $9.2 billion for compensation and benefits this year through September, 13 percent less than the first nine months of last year. Total employees, including consultants and part-time workers, fell 5.4 percent to 34,900.

While Goldman prefers a scalpel, its rival Morgan Stanley wielded an ax. That firm took steps to shrink in the fourth quarter, cutting 1,200 employees, including about 25 percent of the fixed-income trading staff, or about 470 traders and salesmen. When asked about how Morgan Stanley decided to make the changes, trading chief Ted Pick said he favored a bold move.

“We took the view of taking tough medicine,” Pick, 47, said in February.

Goldman Sachs’s slower approach may reflect a desire to avoid cutting too much if trading or dealmaking comes roaring back. Chief Executive Officer Lloyd Blankfein has spoken about staying nimble to respond to revenue opportunities when they arise.

The job cuts continued after first-quarter revenue was the worst for the start of a year in Blankfein’s decade-long tenure. While trading business bounced back in the second and third quarters, total trading revenue for the first nine months declined 11 percent from last year.

The WARN notices don’t capture firings outside New York and they don’t include voluntary retirements. More than a half-dozen partners have left Goldman Sachs this year, according to internal memos obtained by Bloomberg.

“Everything Goldman does is scrutinized,” Branthover said. “This may be a signal or a sign that there are changes being made internally, or there are businesses and areas that are not performing satisfactorily. I would keep an eye on it.”