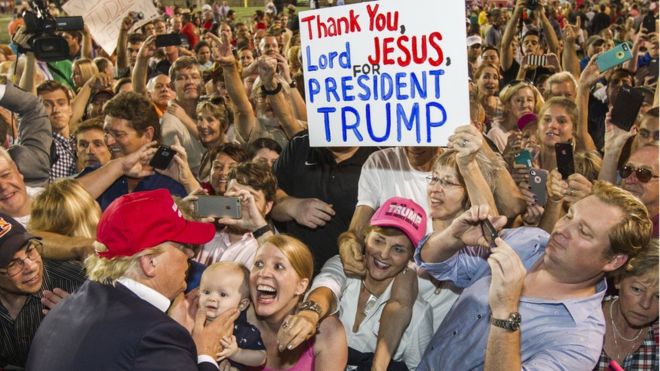 At UN climate talks in Morocco, countries say they are prepared to move ahead without the US.

President-elect Trump has said that he will "cancel" the Paris Climate Agreement within 100 days of taking office.

Negotiators in Marrakech say that such a move would seriously damage the credibility of the US.

The election of a candidate viewed with horror by many environmental campaigners, has cast a significant shadow over COP22 - the annual meeting of climate delegates from almost 200 countries.

They have come to Marrakech to work on the nuts and bolts of the Paris Climate Agreement.

However the election of Mr Trump now poses something of a threat to the deal signed less than a year ago in the French capital.

The treaty commits governments to take action to keep global temperatures from rising by 2C above pre-industrial levels and to do their best to keep that rise to less than 1.5 degrees.

But Mr Trump has promised that within 100 days of taking office he would "cancel" the agreement and "stop all payments of US tax dollars to UN global warming programmers".

Aware of Mr Trump's intentions, countries speedily ratified the Paris deal and it became a binding part of international law on 4 November.

If the new president wants to take the US out of the agreement, the process will require four years before he is free of it.

But while that might frustrate Mr Trump, he has also promised within his first 100 days, to rescind the executive actions that President Obama has taken to limit US emissions of carbon.

The key element of the Obama scheme was the Clean Power Plan, that aimed to severely restrict CO2 from energy production.

On the campaign trail, Donald Trump repeatedly denounced the costs of the plan and said he would reverse it.

"It also means scrapping the EPA's so-called Clean Power Plan, which the government itself estimates will cost $7.2bn a year. This Obama-Clinton directive will shut down most, if not all, coal-power electricity plants," he told an audience in New York in September.

The President-elect's plans to renege on the Paris Agreement and push forward with coal have been condemned by green groups globally.

"Trump's election is a disaster, but it cannot be the end of the international climate process," said May Boeve from 350.org.

"We're not giving up the fight and neither should the international community. Trump will try and slam the brakes on climate action, which means we need to throw all of our weight on the accelerator."

In Marrakech, where up to 20,000 participants from all over the world are trying to advance the Paris Climate Agreement, there was a strong sense that the President-elect's promises wouldn't sabotage the deal.

"I'm sure that the rest of the world will continue to work on it," Moroccan chief negotiator Aziz Mekouar told wire agencies.

Others felt that the practicalities of office may change Mr Trump's tone.

"Now that the election campaign has passed and the realities of leadership settle in, I expect he will realize that climate change is a threat to his people and to whole countries which share seas with the US, including my own,'' said Marshall Islands President Hilda Heine at the meeting.

However, Mr Trump's promise to rapidly get out of the Paris agreement and to push forward with a coal friendly policy have been welcomed by groups representing the fossil fuel industry.

According to the American Energy Alliance (AEA), which has attracted funding from companies and individuals opposed to green energy, the election presented the opportunity to reset the "harmful" policies of the last generation.

"We were among the first organizations to endorse President-elect Trump," the AEA said in a statement.

"We're excited to work with his administration to put forth energy policies that will deliver affordable energy to American families, invigorate the economy, and create more opportunities for future generations."

For delegates in Marrakech, Mr Trump's promises to pull out of Paris and his general climate skepticism are an unwelcome distraction but not as yet a derailment.

Many believe that over time, the realities of a changing climate would bring even the wealthy businessman into line.

"It's clear Donald Trump is about to be one of the most powerful people in the world," said Alden Meyer, from the Union of Concerned Scientists.

"But even he does not have the power to amend and change the laws of physics, to stop the impacts of climate change, to stop the rising sea levels."