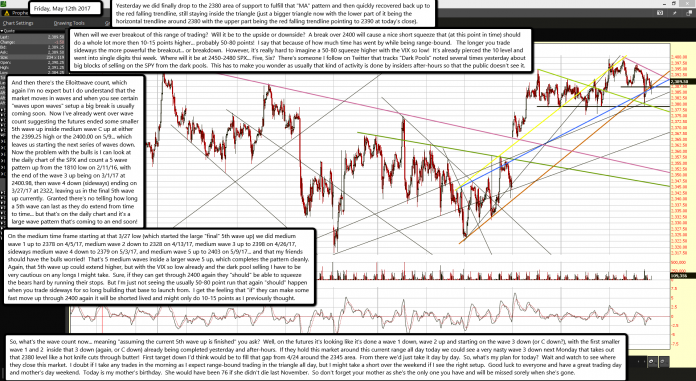 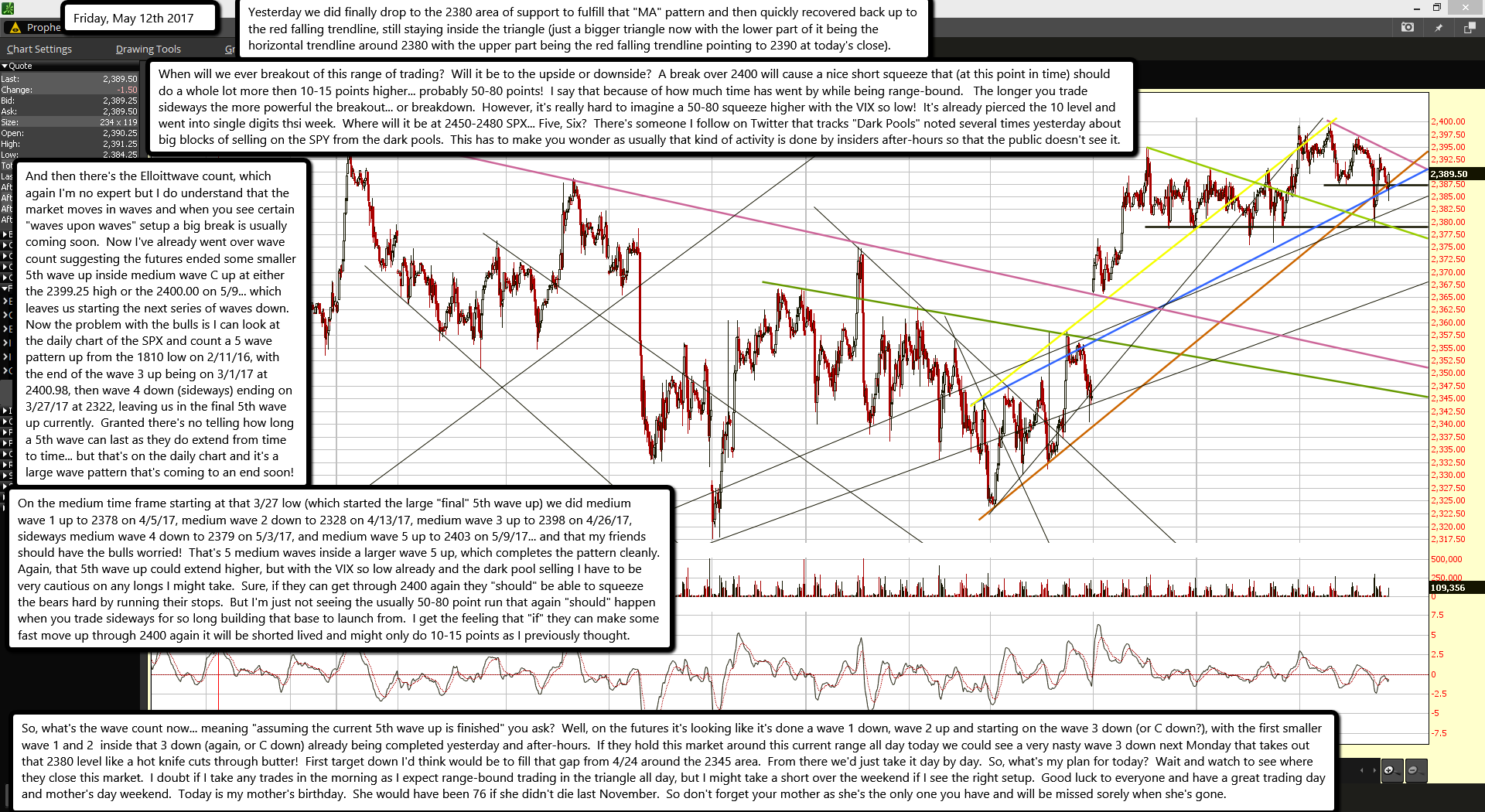 When will we ever breakout of this range of trading?  Will it be to the upside or downside?  A break over 2400 will cause a nice short squeeze that (at this point in time) should do a whole lot more then 10-15 points higher... probably 50-80 points!  I say that because of how much time has went by while being range-bound.   The longer you trade sideways the more powerful the breakout... or breakdown.  However, it's really hard to imagine a 50-80 squeeze higher with the VIX so low!  It's already pierced the 10 level and went into single digits thsi week.  Where will it be at 2450-2480 SPX... Five, Six?  There's someone I follow on Twitter that tracks "Dark Pools" noted several times yesterday about big blocks of selling on the SPY from the dark pools.  This has to make you wonder as usually that kind of activity is done by insiders after-hours so that the public doesn't see it.

And then there's the Elloittwave count, which again I'm no expert but I do understand that the market moves in waves and when you see certain "waves upon waves" setup a big break is usually coming soon.  Now I've already went over wave count suggesting the futures ended some smaller 5th wave up inside medium wave C up at either the 2399.25 high or the 2400.00 on 5/9... which leaves us starting the next series of waves down.  Now the problem with the bulls is I can look at the daily chart of the SPX and count a 5 wave pattern up from the 1810 low on 2/11/16, with the end of the wave 3 up being on 3/1/17 at 2400.98, then wave 4 down (sideways) ending on 3/27/17 at 2322, leaving us in the final 5th wave up currently.  Granted there's no telling how long a 5th wave can last as they do extend from time to time... but that's on the daily chart and it's a large wave pattern that's coming to an end soon!

So, what's the wave count now... meaning "assuming the current 5th wave up is finished" you ask?  Well, on the futures it's looking like it's done a wave 1 down, wave 2 up and starting on the wave 3 down (or C down?), with the first smaller wave 1 and 2  inside that 3 down (again, or C down) already being completed yesterday and after-hours.  If they hold this market around this current range all day today we could see a very nasty wave 3 down next Monday that takes out that 2380 level like a hot knife cuts through butter!  First target down I'd think would be to fill that gap from 4/24 around the 2345 area.  From there we'd just take it day by day.  So, what's my plan for today?  Wait and watch to see where they close this market.  I doubt if I take any trades in the morning as I expect range-bound trading in the triangle all day, but I might take a short over the weekend if I see the right setup.  Good luck to everyone and have a great trading day and mother's day weekend.  Today is my mother's birthday.  She would have been 76 if she didn't die last November.  So don't forget your mother as she's the only one you have and will be missed sorely when she's gone.