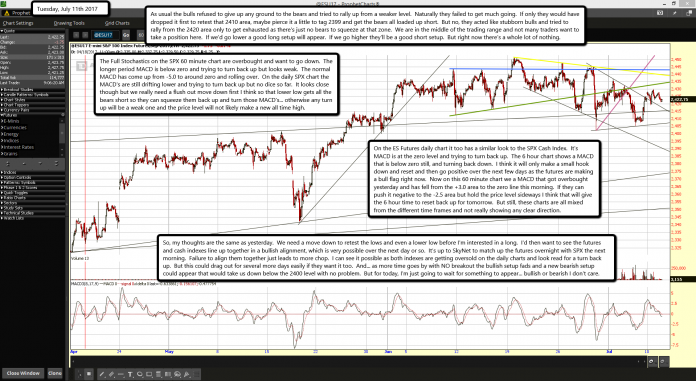 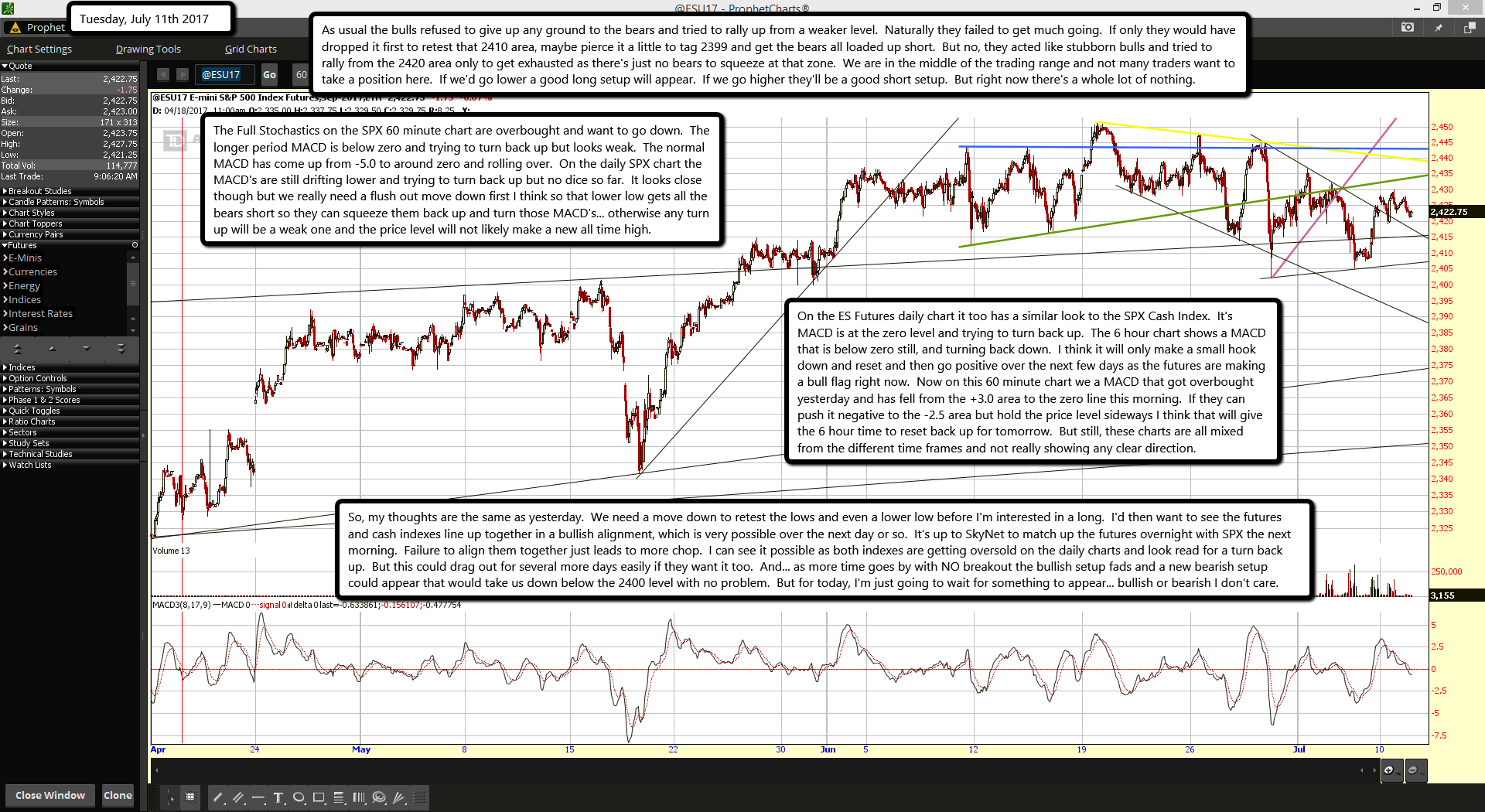 As usual the bulls refused to give up any ground to the bears and tried to rally up from a weaker level.  Naturally they failed to get much going.  If only they would have dropped it first to retest that 2410 area, maybe pierce it a little to tag 2399 and get the bears all loaded up short.  But no, they acted like stubborn bulls and tried to rally from the 2420 area only to get exhausted as there's just no bears to squeeze at that zone.  We are in the middle of the trading range and not many traders want to take a position here.  If we'd go lower a good long setup will appear.  If we go higher they'll be a good short setup.  But right now there's a whole lot of nothing.

The Full Stochastics on the SPX 60 minute chart are overbought and want to go down.  The longer period MACD is below zero and trying to turn back up but looks weak.  The normal MACD has come up from -5.0 to around zero and rolling over.  On the daily SPX chart the MACD's are still drifting lower and trying to turn back up but no dice so far.  It looks close though but we really need a flush out move down first I think so that lower low gets all the bears short so they can squeeze them back up and turn those MACD's... otherwise any turn up will be a weak one and the price level will not likely make a new all time high.

On the ES Futures daily chart it too has a similar look to the SPX Cash Index.  It's MACD is at the zero level and trying to turn back up.  The 6 hour chart shows a MACD that is below zero still, and turning back down.  I think it will only make a small hook down and reset and then go positive over the next few days as the futures are making a bull flag right now.  Now on this 60 minute chart we a MACD that got overbought yesterday and has fell from the +3.0 area to the zero line this morning.  If they can push it negative to the -2.5 area but hold the price level sideways I think that will give the 6 hour time to reset back up for tomorrow.  But still, these charts are all mixed from the different time frames and not really showing any clear direction.

So, my thoughts are the same as yesterday.  We need a move down to retest the lows and even a lower low before I'm interested in a long.  I'd then want to see the futures and cash indexes line up together in a bullish alignment, which is very possible over the next day or so.  It's up to SkyNet to match up the futures overnight with SPX the next morning.  Failure to align them together just leads to more chop.  I can see it possible as both indexes are getting oversold on the daily charts and look read for a turn back up.  But this could drag out for several more days easily if they want it too.  And... as more time goes by with NO breakout the bullish setup fads and a new bearish setup could appear that would take us down below the 2400 level with no problem.  But for today, I'm just going to wait for something to appear... bullish or bearish I don't care.