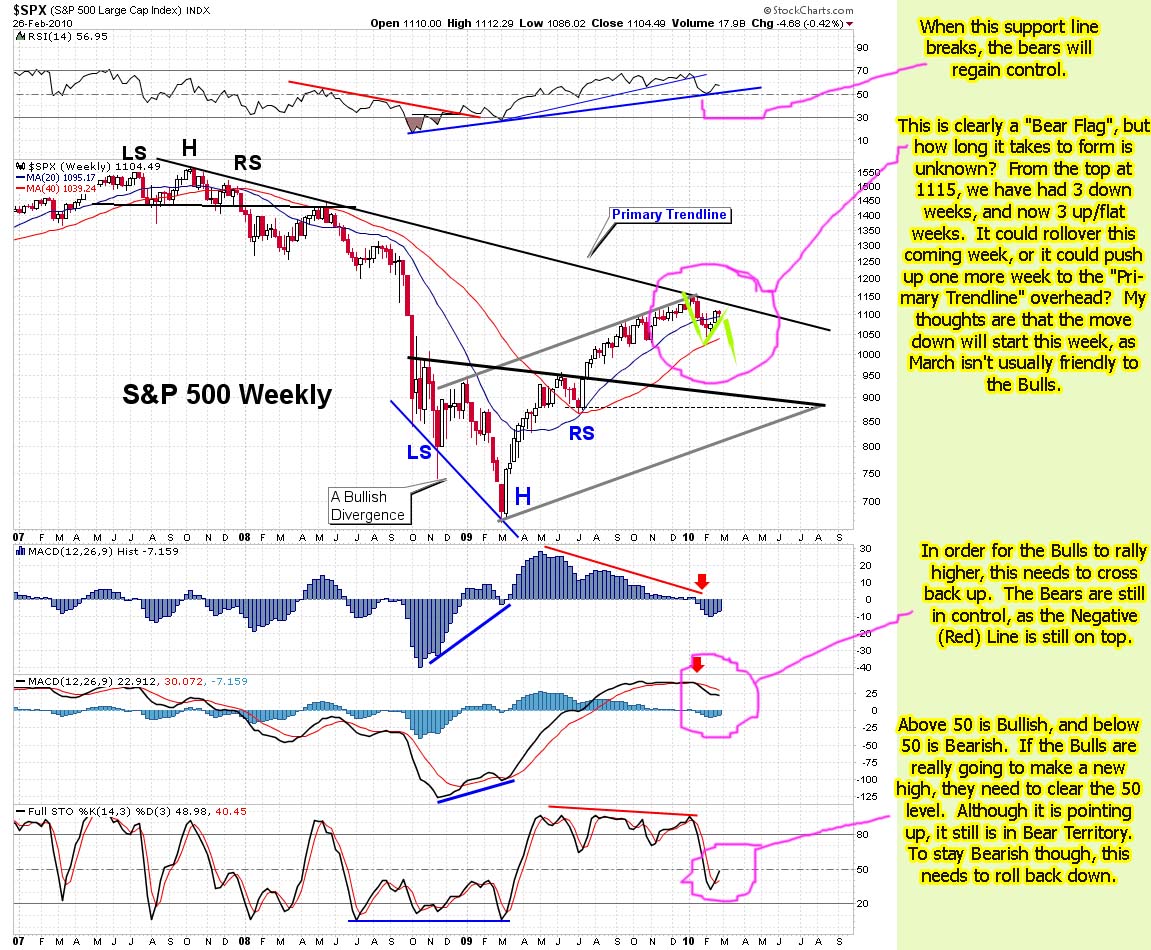 I see no point in trying to forecast intraday, or even daily moves in this extremely manipulated stock market.  So, I'm going to focus on the weekly instead.  Let's look at the weekly chart below... 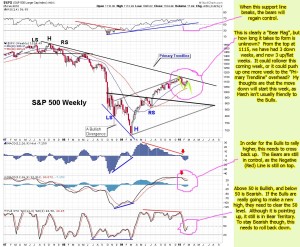 We are clearly forming a nice bear flag on it, as we have now completed 3 weeks of a down move, and 3 weeks of an up to sideways move.  Notice that last week was basically flat (down a little), putting in a bearish hammer candle.  If this bear flag plays out, then we should head down to the 104 spy double bottom area by the end of next week.

I suspect that the jobs numbers will be really bad this week, and will be blamed for the sell off coming.  But that doesn't come until later in the week.  So just remember, most Monday's are bullish, and I've rarely seen a big down day on Monday.  That doesn't mean it won't happen, only that it's not likely.  If Monday does push up a little more, then I think the target will be the 112.00-112.50 area, as it's provided great resistance in the past, and should continue to do so.

If that gets broken, then we are heading for a double top at 1115 spx.  I really don't see that happening with all the news out next week.  The bulls seem to be just about done now, as it's going to be extremely hard to push up very much further.  From the Monthly to Weekly charts putting huge downward pressure on the market, to the seasonality of March, and multiple turn dates coming up... it's not looking good for the bulls. 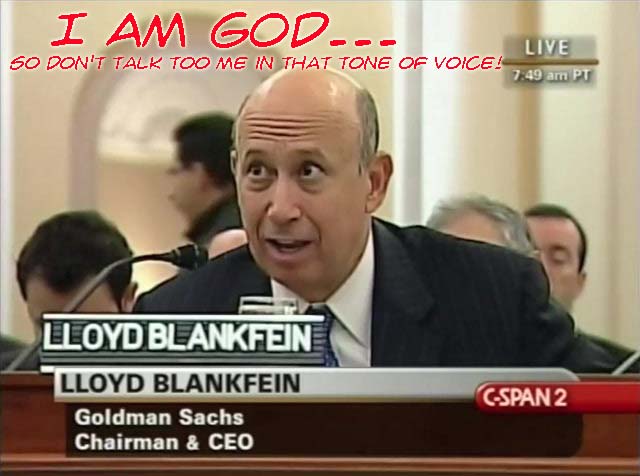 Anyway, that simply means that NO about of Technical Analysis I do is going to be accurate with all the free money still manipulating the system.  If you have unlimited funds to keep the market up, then no about of selling will ever stick.  Anna seems to think that we won't get any significant downside until Obama pushes his worthless Heathcare system through.  That very well could be right?

Remember this... from the creation of the stock market, until the present, there has always been manipulation in the system.  However, the control that they have had, was limited by the amount of cash they had to work with.  When the PPT (Plunge Protection Team, created by Ronald Regan after the 1987 crash... which was originally designed to simply prevent further crashes, not manipulate the market) was created, the crooks seen that as an opportunity to have free funds from the government, instead of using just their own.

Then along came March 6th, 2009... which forced Obama to turn the money flow on full blast, giving unlimited funds to the PPT (aka Goldman Sachs).  Their humble leader Lloyd Blankfein (aka GOD), does just what any good crook would do... buy up his own stock, almost tripling it in value over the next year.  Then, pay himself and other bankster pals huge bonuses with all the money that he had stolen from the unsuspecting American public.

What does all this mean?  Simple really... it means that you can't really use TA's anymore to forecast the possible direction with any kind of real accuracy.  I do believe that technical analysis still works on most individual stocks and some commodities... but not the overall market right now.

If it sounds like I'm bitching and complaining again... you're right, I am!  What good does it do to study charts, learn Elliottwave, Technical Analysis, Fibonacci Retracement levels, Astrology, Gann or Bradley turn dates, and any other forecasting method, if none of them work anymore.

I've always known that trading was very difficult, and not very easy to become successful at.  I've been through the "school of hard knocks", and I've put in my time in studying and learning the techniques that are available t0o be learned.  Obviously, the "real techniques" and secrets are buried inside Goldman Sachs, as I can't find anyone else who can figure out where this market is going next... can you?