Odds are extremely high for a stock market crash now.  Could we have a Black Wednesday on May 19th, 2010?

I don't know of course, but we now have 4 out of 5 charts pointing down.  The only chart that isn't, is the 15 minute chart, which could give any trapped bulls a small pop in the morning to exit their longs, and get short.  I've called for a Black Monday 3 times in the past and been wrong on all three.

When I look back at the charts on those calls, I find that I didn't have them all lined up in the same direction... DOWN.  Which is probably why my calls weren't correct.  But, as each day passes, I learn more and more about how this game works.  Not that I'm an expert by any means, but it's becoming clearer too me now, as to how to tie all the different charting techniques together.

Let's look at the charts now, and see what they tell us.  I'm going to skip the monthly as nothing has changed since I last posted it.  You can look at it again by clicking here.  You will notice that it is from April 30th, 2010... and you can see where it's at now by going to Shanky's Charts by clicking here.

You will notice the red bar now in May, and if you try to find the 1260-1280 area on the now broken rising trendline, it looks like it could come in on the July candle, as I believe that the June candle would put it at about 1240 area (look to the right where you see 1240.03... that lines up with a backtest of the broken trendline on this monthly chart.

Let's look at the weekly chart now.  I'm just going to put a link to it here, as it's playing out like we expected it too.  Here is a link to a post from May the 2nd, 2010... and here's a direct link to the chart only.  As you can see, we are still headed down.  The Moving Averages haven't crossed over each other yet, but I think they will by July.  When they do... P3 is here!  But for now, I think they will move closer together over the coming month, trending sideways, and finally cross when the market rolls over in late June, early July.

Next up, the Daily chart... 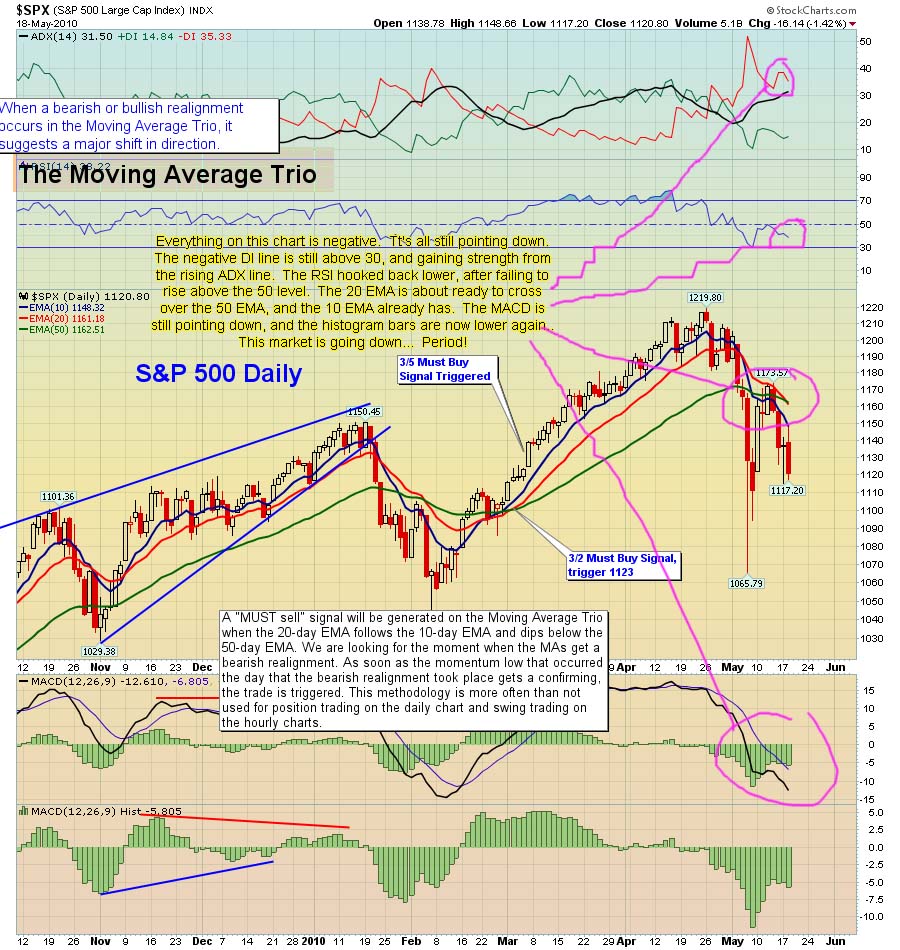 Well first off, you can clearly see now that the 20 EMA (red line) is touching the 50 EMA (green line).  It's pointing down and should cross over the 50 EMA tomorrow.  Notice also that the MACD lines are still pointing down too, and the histogram bars are now getting deeper again.  The negative DI line (in Red, at the top) are still above 30, while the positive DI line (in Green) is below 20.  The ADX line (the Black line in the middle) is rising, which strengthens whichever DI line is on top... in this case, the Negative one.  The RSI is still below 50, giving strength to the bears.  This chart is still very bearish, and I definitely see more downside coming. 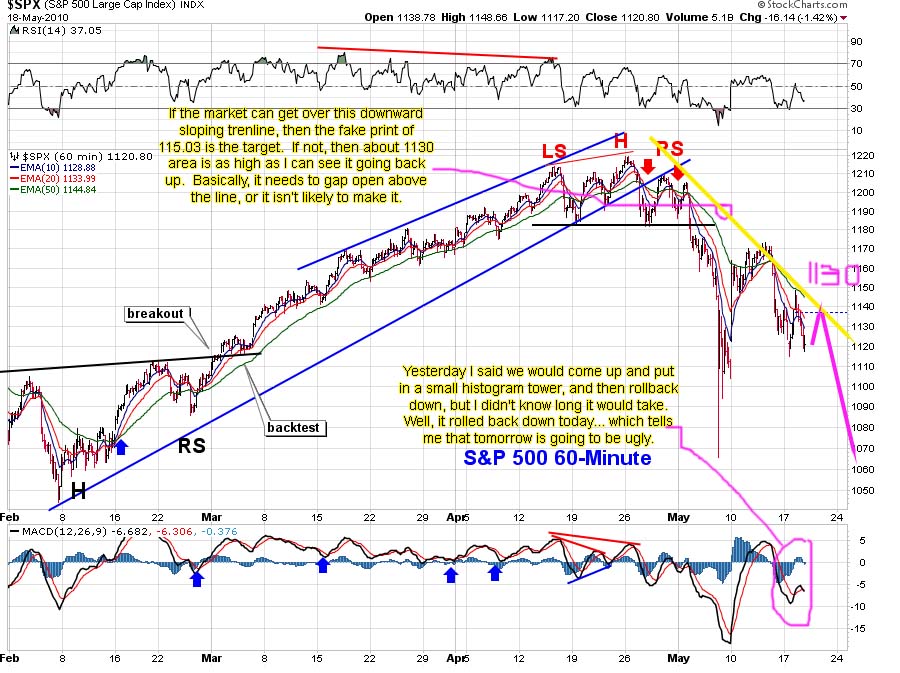 Notice how the MACD lines were pointed up this morning during the brief rally, but have now turned back down again.  The histogram bars rose up above the zero line, and quickly put in a much smaller tower, and are now ready to go back below zero tomorrow.  The RSI line (top chart) rallied up to the 50 line in the morning, and was quickly rejected and is now pointing back down, giving strength again to the bears.

Also notice that the market tagged the downward sloping trendline around 1150 and was rejected again.  The market is headed down, and it's most likely going to be a wave 3 of 3, in Elliottwave terms. 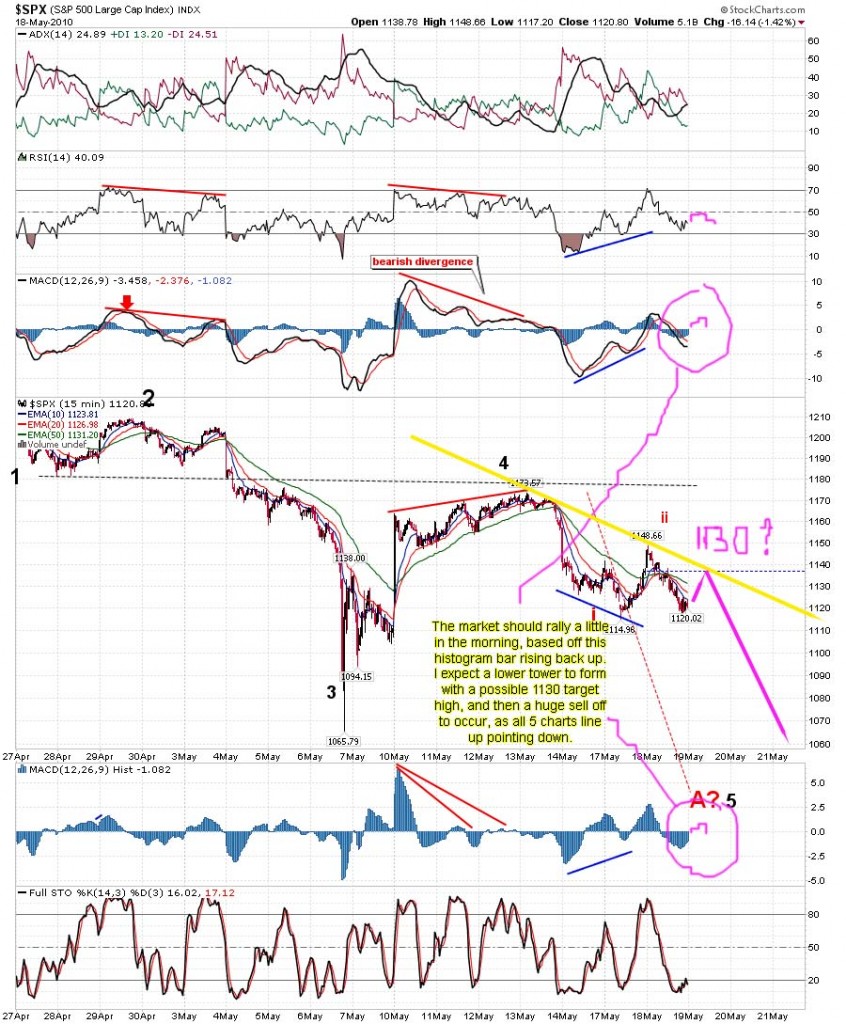 This is the only chart that could give the bulls some hope, but it will be short lived if it does.  I could possibly see a small early morning rally back up to the 1130 area, where the downward sloping trendline will be at tomorrow.  This is the last stop for the bulls to get off the train, as the tracks dead end at the edge of the Grand Canyon.  As you can see by the rising histogram bars, this could rally the market a little while it goes into positive territory and puts in a small tower, before rolling over to the downside again.

Once all 5 charts are pointing down... all hell is going to break loose next!  This could line up perfect with the time that the Senate votes on the Financial Reform Bill, when they stage a huge protest march in Greece, and when Germany bans short sellers.  Talk about a triple whammy!  All those events together, along with what the charts tell me spell one word... Crash!

Maybe I'm little too crazy for some of you too believe, and yes I've made some stupid calls and predictions in the past.  But, I was still learning the rules of this game back then during those calls.  Since then, I've learned to get a better view of the whole picture.  I could be dead wrong on this, and I wouldn't dare give you trading recommendations to go buy a certain etf or stock.  But, if you are long, I highly suggest you think twice about going to cash, and get out tomorrow when you can.

P.S.  This was a late day post by Diablos who caught this fake print, showing 115.03 spy.  I don't know if it plays out tomorrow or if that's a sign for where they plan to close it on Friday, which makes more sense, because of the huge amount of open interest on the puts at that 115 level.

But at this point, from looking at the overnight futures, I don't think this print will play out tomorrow, but will play out at in a future unknown date.  Could it play out this Friday where all the put open interest is, or will the market makers not be able to rally it back up to that level by then?  I don't know of course, but my gut tells me that they are the buyers of a lot of those put contracts, and want a market crash to make money from them.

Sometimes they like to fool you, and not close it where you expect them too.  I know that many times in the past, I seen a target level that was extremely loaded up with calls at that level, and I thought for sure that they would pin the SPY at level, to avoid paying out those call holders... only to see the market blow up past that level and close higher on option expiration.  So for now, let's just put it in our little bag of tricks and look for a future date. Thanks Diablos

P.S.S.  The futures are down 10 points as I finish this post.  It's not looking good for one more backtest of that trendline around 1130 tomorrow.  We'll see... anything can happen.