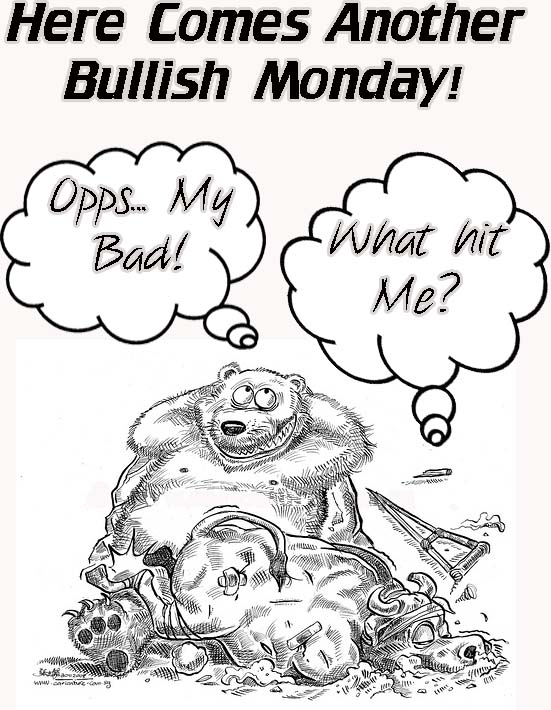 How rare it is too see a down Monday...

But, today was very bearish all day, with a very small bounce back up in the morning.  I really wasn't expecting too much of a rally today, however I thought 1080 was possible.   But, the bulls just didn't have anymore money left to buy it seems.  They had everything going for them... after all it was "Bullish Monday", the most bullish day of the week.  And, they had light volume (129 million shares of the SPY) working for them too, but they failed at every attempt to get something going.

Tomorrow doesn't look an better for them either, as daily chart has clearly rolled back down, with the monthly and weekly also supporting more selling.  They also broke through a key horizontal support level on many of the indexes.  On top of that, they are still stuck in a falling channel with no real support to stop the sell off, besides the 1040 area... which will likely be broken in the afterhours session, or tomorrow morning.

The lower trendline on the falling channel is now coming in around 990-1000 spx, which should provide some good support, since this falling channel has keep the market in it since the 1220 high.  From a technical point of view, the market isn't oversold on the monthly, weekly or daily charts.

The 60 minute charts was trying to rise back up today, from being oversold on Friday, but it turned back down at the end of the day.  It can go a lot lower as the ADX line is just now rising up, with the -DI line on top.  While it might feel like it's oversold... it's not, at least from reading the technical's it doesn't look like it too me.

The 15 minute chart is heading down, but isn't oversold yet either.  It's now in another falling channel of its' own.  There are still lots of negative things out there in the world that isn't helping the bulls any at all.  Some good news, and oversold conditions are going to be needed to rally this market.

That means we must sell off more, to put the charts in oversold conditions, before any serious rally could occur.  Gold was also rallying big today, which tells me that there is still fear in the market.  Gold is where people run for safety, when they fear the stock market.

On top of all that, most of the bank stocks sold off today.  So did Apple and Google, as well as oil related stocks.  Of course with the oil disaster still not solved, I don't see them rallying the market.  It probably going to come from some other sector... which one, I don't know?

Bottom line... the traders are still scared to buy.  Another lower low is most likely coming, unless some miracle bailout plan is created again.  I just don't see that happening again.  The Federal Reserve crooks are broke, and they can't steal anymore money from the taxpayers, as the people won't let them.

Let me remind everyone of these two charts from Cobras blog, showing the "Institutional Buying and Selling", and the "Long Term Trending Federal Liquidity and Foreign Liquidity Inflows".  As you can see, there isn't anymore bailout money left in to rally the market.  So who's left too buy now?

I'm expecting more selling tomorrow, with small intraday bounces.  My target is the lower trendline of the falling channel, coming in now around the 990-1000 level.  After that is tagged, I expect a nice rally up to occur, to work off the extreme oversold conditions that will happen from the move down.

P.S.  SC, you don't have too read my posts or watch the video's... if you don't agree my "red pill" reports.  No point in leaving over spoiled milk... as the old saying goes.  I enjoy chatting with you, but if you feel the need to leave, I understand.

P.S.S.  Trolls, you might as well get used too me posting stories about you, as I plan to continue exposing the truth.  Not that it will be a daily thing, but from time to time, I'll be posting something that still keeps this site classified as a "Red Pill" site.  You're welcome to read it of course, but I don't know why you waste your time trying to distract the regular readers here by posting something of no value.  They aren't stupid you know... they know a troll when they see one.