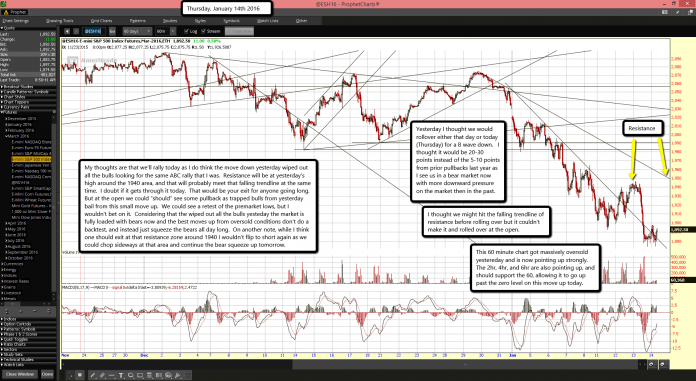 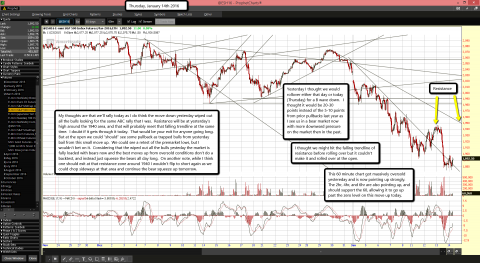 Yesterday I thought we would rollover either that day or today (Thursday) for a B wave down. I thought it would be 20-30 points instead of the 5-10 points from prior pullbacks last year as I see us in a bear market now with more downward pressure on the market then in the past.

I thought we might hit the falling trendline of resistance before rolling over but it couldn't make it and rolled over at the open.

This 60 minute chart got massively oversold yesterday and is now pointing up strongly. The 2hr, 4hr, and 6hr are also pointing up, and should support the 60, allowing it to go up past the zero level on this move up today.

My thoughts are that we'll rally today as I do think the move down yesterday wiped out all the bulls looking for the same ABC rally that I was. Resistance will be at yesterday's high around the 1940 area, and that will probably meet that falling trendline at the same time. I doubt if it gets through it today. That would be your exit for anyone going long. But at the open we could "should" see some pullback as trapped bulls from yesterday bail from this small move up. We could see a retest of the premarket lows, but I wouldn't bet on it. Considering that the wiped out all the bulls yesterday the market is fully loaded with bears now and the best moves up from oversold conditions don't do a backtest, and instead just squeeze the bears all day long. On another note, while I think one should exit at that resistance zone around 1940 I wouldn't flip to short again as we could chop sideways at that area and continue the bear squeeze up tomorrow.