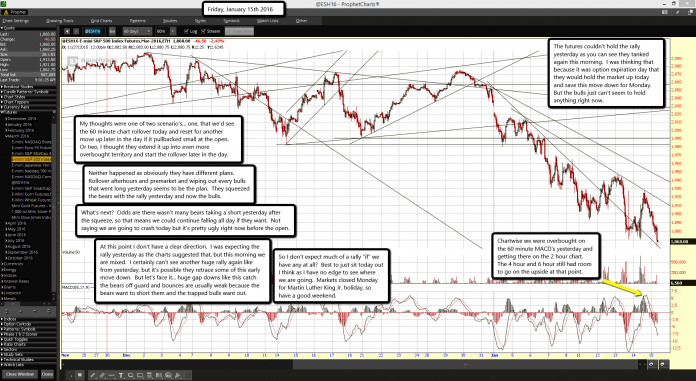 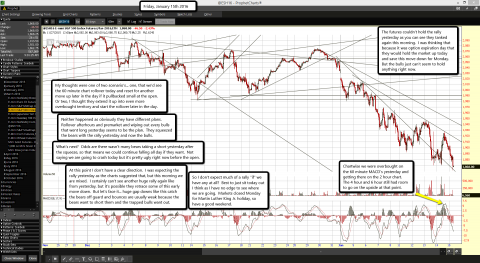 The futures couldn't hold the rally yesterday as you can see they tanked again this morning.  I was thinking that because it was option expiration day that they would hold the market up today and save this move down for Monday.  But the bulls just can't seem to hold anything right now.

Chartwise we were overbought on the 60 minute MACD's yesterday and getting there on the 2 hour chart.  The 4 hour and 6 hour still had room to go on the upside at that point.

My thoughts were one of two scenario's... one, that we'd see the 60 minute chart rollover today and reset for another move up later in the day if it pullbacked small at the open.  Or two, I thought they extend it up into even more overbought territory and start the rollover later in the day.

Neither happened as obviously they have different plans.  Rollover afterhours and premarket and wiping out every bulls that went long yesterday seems to be the plan.  They squeezed the bears with the rally yesterday and now the bulls.

What's next?  Odds are there wasn't many bears taking a short yesterday after the squeeze, so that means we could continue falling all day if they want.  Not saying we are going to crash today but it's pretty ugly right now before the open.

At this point I don't have a clear direction.  I was expecting the rally yesterday as the charts suggested that, but this morning we are mixed.  I certainly can't see another huge rally again like from yesterday, but it's possible they retrace some of this early move down.  But let's face it... huge gap downs like this catch the bears off guard and bounces are usually weak because the bears want to short them and the trapped bulls want out.

So I don't expect much of a rally "if" we have any at all?  Best to just sit today out I think as I have no edge to see where we are going.  Markets closed Monday for Martin Luther King Jr. holiday, so have a good weekend.