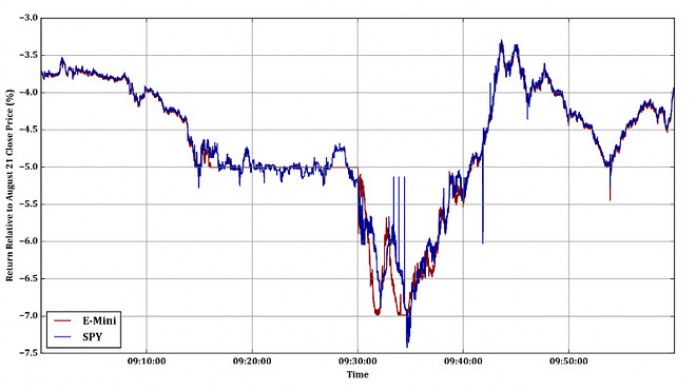 On Aug. 24, there were big gaps in the values of the E-mini and SPY exchange-traded fund -- which track the same index, the S&P 500.

The Securities and Exchange Commission’s go-to-group of industry professionals on the stock market will meet to discuss a single day of trading last summer that raised questions over the operation of exchange-traded funds and equities more generally .

The SEC’s Equity Market Structure Advisory Committee, made up of regulators, academics and representatives of fund managers, brokers and stock exchanges, is planning a Feb. 2 meeting to discuss the events of Aug. 24 and “certain issues affecting customers in the current equity market structure.”

On Aug. 24, U.S. stocks and equity-related futures markets experienced extraordinary volume and significant price volatility, particularly at the 9:30 a.m. start of regular trading hours. There were big gaps between the value of underlying indexes and the exchange-traded funds that track them, and many of the largest-cap stocks experienced brief swoons that were 10% or more below their previous close.

It’s not the first time the SEC looked into that day.

On Dec. 29 the SEC’s Division of Trading and Markets issued a research note that explains what happened without drawing conclusions about why the volatility and pricing dislocations occurred or what should be done to prevent such occurrences in the future. The report does discuss the opening process at primary listing exchanges, the triggering of trading pauses and the effects of the market volatility on trading in exchange-traded products, or ETPs.

The day started on a bearish tilt — global asset manager BlackRock, in an October research report, describes global market sentiment in late August “weighing bearishly” on stocks. Even before the markets opened in the U.S. that day, global equity markets were down 3% to 5% and the e-mini S&P 500 future was limit down 5% in pre-market trading. Investors responded to these global macro concerns with aggressive orders to sell, including four times the number of market orders observed on an average trading day, according to New York Stock Exchange data.

Many New York Stock Exchange-listed stocks opened for trading later than 9:30 a.m. on the NYSE even though they were traded at other exchanges and off-exchange venues before and after 9:30. Until NYSE-listed constituents of the S&P 500 index were opened on the NYSE, the S&P 500 index still reflected NYSE closing prices from August 21.

The index declined on the opening by 5.2% from the previous Friday close, according to the SEC report. It remained substantially higher than the prices of the SPDR S&P 500 ETF Trust SPY, -0.85% which declined 7.8%. The most actively traded equity-related futures contract, the E-Mini S&P 500, declined to its limit down price of 5% below the previous trading day’s closing price and was paused for trading from 9:25 to 9:30, the SEC report said.

In a note to clients, Themis Trading said they have raised this issue consistently over the past few years and even published a paper titled “Phantom Indexes” where they called on the index providers to change their calculation methodology. In October S&P’s Dow Jones Equity Indices team issued a “consultation” to the investment community, asking them to comment on whether it should change its methodology for calculating the index during market disruptions. A decision has not yet been made.

The disconnect between halts on underlying stocks within indices and the need to price the index resulted in the pricing volatility seen in exchange-traded products. In the October report BlackRock told clients that “a combination of factors impacted market makers,” on Aug. 24. “Seeing an absence of quotations or price indications on many ETP portfolio holdings, unable to effectively hedge due to [limit-up, limit-down] halts, and lacking clarity regarding erroneous trades, market makers were temporarily unable to participate in the ‘arbitrage mechanism’ to align prices properly for a number of ETPs.”

The limit-up, limit-down issues on August 24 were centered at the NYSE, according to the SEC’s report. More than half (51%) of NYSE’s 78 halts lasted more than 6 minutes, with one lasting over 18 minutes. There weren’t as many or as long on the Nasdaq NDAQ, +1.27% , and BATS only had three halts but one lasted 28 minutes.

A spokeswoman from the New York Stock Exchange did not respond to a request for comment.

Joe Saluzzi of Themis Trading says he thinks too much emphasis is being placed on this particular quick fix. “There’s a mistaken consensus that tweaking [limit up, limit down] will solve all our problems. That’s a smokescreen to avoid addressing tougher issues like market fragmentation. Another issue that should be addressed is index pricing. The index providers continue to use only primary market data for their calculations when they should be using the consolidated tape.”

Bloomberg reported that some of the world’s largest issuers of ETFs, including BlackRock Inc. BLK, -1.93% , Vanguard Group Inc. and State Street Corp. STT, +0.04% have held talks with stock exchanges on the issues raised by the Aug. 24 volatility.

BlackRock told its customers that market and stop-loss orders that demand “liquidity at any price” added to selling pressure and proved especially risky on the morning of Aug. 24.

A stop order is an order to buy or sell a stock when it passes a certain price. It then becomes a market order, but it may or may not execute at exactly the stop price. If the order is “good till canceled” it remains open until an investor cancels it or a trade is executed. If a trader put in a market sell order on Aug. 24 they may have been shocked to discover later that it sold down 10 or 20%.

The NYSE has become the latest exchange, after BATS and Nasdaq, to announce plans to no longer accept stop orders and good-till-canceled orders, beginning Feb. 26. From its statement: “Many retail investors use stop orders as a potential method of protection but don’t fully understand the risk profile associated with the order type. We expect our elimination of stop orders will help raise awareness around the potential risks during volatile trading.” Some brokers may continue to take stop orders, but those will be executed by internalizers like Citadel not at the major exchanges.
[ad_2]