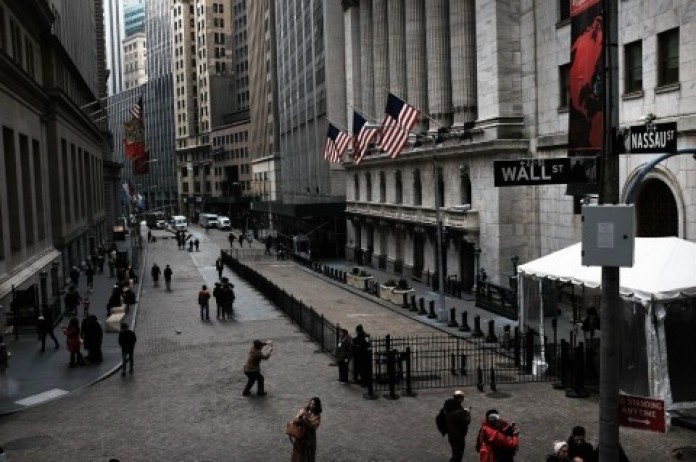 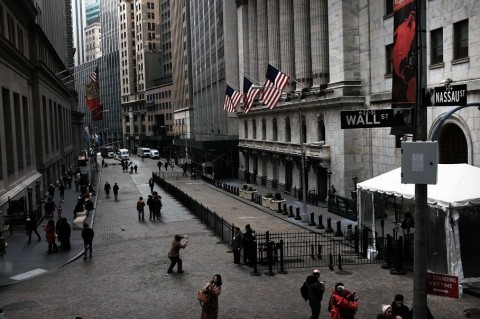 People walk by the New York Stock Exchange in New York City. Markets have been rocky since the start of the year. (Spencer Platt/Getty Images)

Stock markets started the day in the positive Tuesday, in a sign that investors might be ready to shake off some of the worries over low oil prices and a slowdown in China.

But the optimism didn’t last.

All major U.S. indices rose by about 1 percent at the open, but those gains began to taper off as the day went on. By early afternoon, all three indices were in the negative.  By 3 p.m., the Dow Jones industrial average was down 56 points, or 0.35 percent. The Standard & Poor’s 500 stock index, a broader measure of the largest companies, slid 0.64 percent. And the Nasdaq tech index had lost 1 percent.

The quick reversal could be a sign that many investors are still skittish after watching U.S. stock markets dive last week — closing their worst-ever two-week start for a year.

[As growth slows, China is digging itself an even bigger hole]

Some investors may be looking to buy stocks while they’re cheap, analysts say. But markets might continue to slide until investors get more clarity about how the domestic economy will be able to handle any ripple effects of slower economic growth in China.

“People are trying to time this market, and they don’t want to buy in when stocks are falling,” said David Kelly, chief global strategist for JP Morgan Funds. “I think there’s a lot of nervousness about getting in too early when markets could correct some more.”

China reported Tuesday that its economy expanded by 6.9 percent in 2015, the slowest pace in nearly 25 years. Still, the numbers may not have been as bad as some economists and analysts had feared. The Shanghai Composite index, a benchmark index in China, rose 3.2 percent Tuesday and is down 15 percent for the year.

The International Monetary Fund also announced a lower forecast for global economic growth. It now predicts the economy will expand by 3.4 percent this year, down 0.2 percentage points from what it expected in the fall.

For investors in the United States, the uncertainty over global growth raises questions about whether the Federal Reserve acted too soon late last year when it raised short-term rates for the first time in nearly a decade.

When Fed officials meet next week, some investors may be looking for reassurance that the Fed will move cautiously in the wake of the increased volatility, said Phil Orlando, chief equity market strategist for Federated Investors. “Investors have to know that the Fed is not going to blindly hike rates in this environment,” he said.

Investors will also scour corporate balance sheets for hints on whether the domestic economy may be able to stand on its own even as growth slows in China. Both Bank of America and Morgan Stanley reported fourth-quarter profits Tuesday morning, contributing to the initial rally.

The do’s and don’ts of a market crash 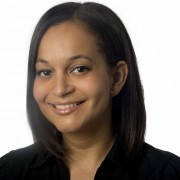