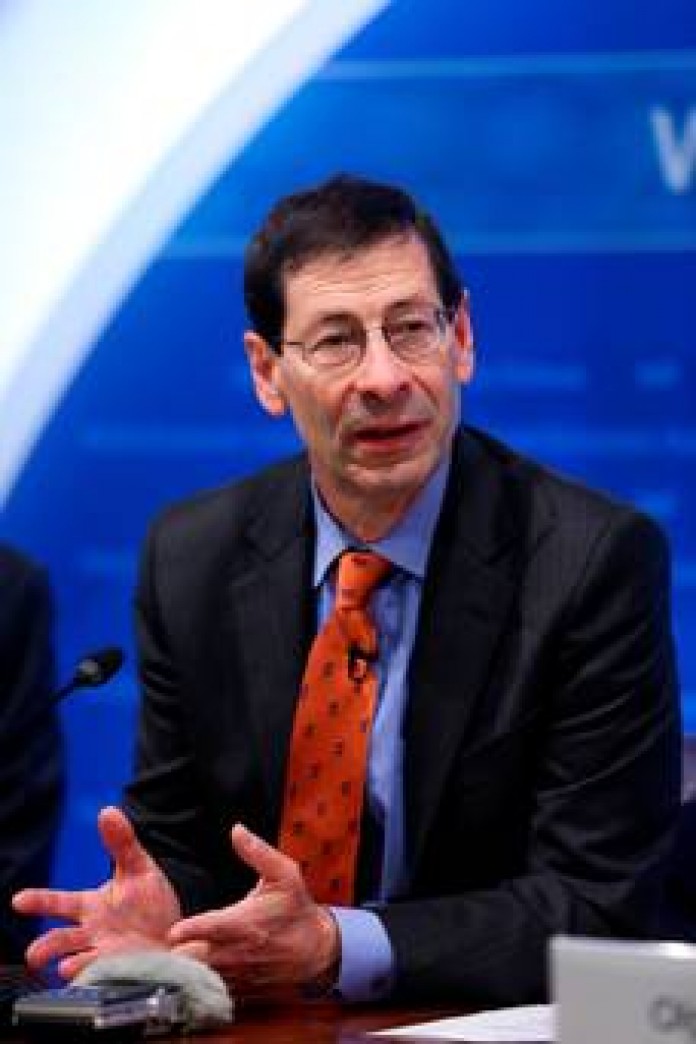 Maurice Obstfeld, chief economist at the International Monetary Fund (IMF), speaks during a news conference at the Bank of England (BOE) in the City of London. Photo: Chris Ratcliffe/Bloomberg

The International Monetary Fund has downgraded its forecasts for global growth, made just three months ago, on the back of slowing growth in China and tumbling oil prices.

In an update to its 'World Economic Outlook', published yesterday, the Washington-based fund said the pick-up in global growth was weak and uneven across economies, with emerging markets and developing economies set for slower growth.

This comes amid a turbulent start to 2016 on markets, concern about the world economy on the back of slowing growth in China and oil plunging to 13-year low at under $28 per barrel. The Standard & Poor's 500 Index of stocks is off to its worst start to a year on record.

Separate data released yesterday showed that China, the world's second-biggest economy, grew by 6.9pc last year, capping a tumultuous year that witnessed a huge outflow of capital, a slide in the currency and a summer stocks crash.

That is the slowest growth rate that China has seen in a quarter of a century.

The IMF said advanced economies would see a modest recovery this year, while emerging markets and developing economies "face the new reality of slower growth".

The IMF estimates that the global economy grew 3.1pc last year, the weakest pace since the 2009 recession.

"This year is going to be a year of great challenges and policymakers should be thinking about short-term resilience and the ways they can bolster it, but also about the longer-term growth prospects," said Maurice Obstfeld, inset, IMF Economic Counsellor and Director of Research.

He added: "Those long-term actions will actually have positive effects in the short run by increasing confidence and increasing people's faith in the future."

Growth in advanced economies is projected to rise to 2.1pc and hold steady in 2017 - a slightly weaker pick-up than that forecast in October. The IMF said overall activity remained robust in the United States.

"But there are also challenges stemming from the strength of the dollar, which is causing the US manufacturing sector to shrink marginally," it said.

The Fund said growth prospects in parts of Asia had diminished as a result of the "unexpectedly big external spillovers from China's growth transition". The IMF maintained its previous China growth forecasts of 6.3pc this year and 6pc next year, representing sharp slowdowns from 2015.

The IMF said a steeper slowing of demand in China remained a risk to global growth and that weaker-than-expected Chinese imports and exports were weighing heavily on other emerging markets and commodity exporters.

India, however, will continue to grow at the fastest pace among emerging economies.

In Europe, lower oil prices will help support personal spending, so the IMF said it added a 0.1 percentage point to its 2016 eurozone growth forecast, bringing it to 1.7pc, where it will remain for 2017.

The update came as Bank of England Governor Mark Carney signalled that a rise in UK interest rates is still a considerable way off. "Now is not yet the time to raise interest rates," he said in a speech in London yesterday.

"The world is weaker and UK growth has slowed. Due to the oil-price collapse, inflation has fallen further and will likely remain very low for longer.

Mr Carney said the decision to keep rates low had been "straightforward". Sterling fell slightly against the euro in the wake of the announcement, before edging back up to 76 pence.

"Given the scale of foreign disinflationary pressures, current domestic cost growth is not yet consistent with a firming in underlying inflation," Mr Carney said.

"The Monetary Policy Committee must remain vigilant for signs that low inflation is having second-round effects in the wage bargain, possibly via inflation expectations."