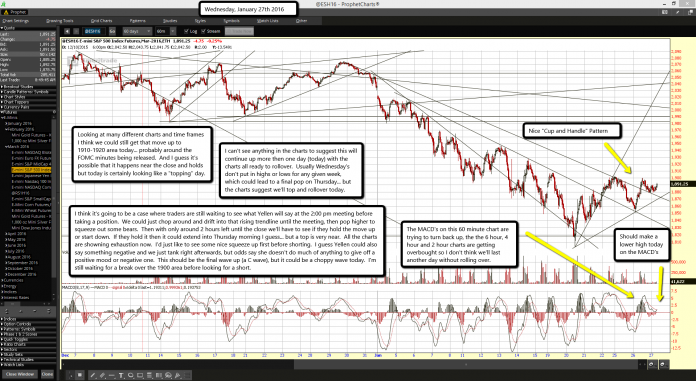 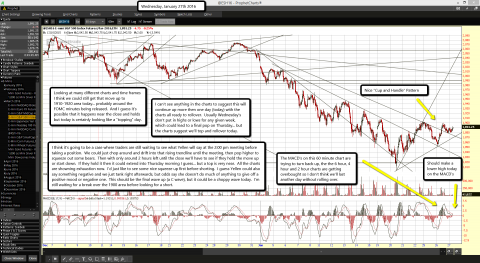 Nice "Cup and Handle" Pattern.  Should make a lower high today on the MACD's.

The MACD's on this 60 minute chart are trying to turn back up, the the 6 hour, 4 hour and 2 hour charts are getting overbought so I don't think we'll last another day without rolling over.

Looking at many different charts and time frames I think we could still get that move up to 1910-1920 area today... probably around the FOMC minutes being released.  And I guess it's possible that it happens near the close and holds but today is certainly looking like a "topping" day.

I can't see anything in the charts to suggest this will continue up more then one day (today) with the charts all ready to rollover.  Usually Wednesday's don't put in highs or lows for any given week, which could lead to a final pop on Thursday... but the charts suggest we'll top and rollover today.

I think it's going to be a case where traders are still waiting to see what Yellen will say at the 2:00 pm meeting before taking a position.  We could just chop around and drift into that rising trendline until the meeting, then pop higher to squeeze out some bears.  Then with only around 2 hours left until the close we'll have to see if they hold the move up or start down.  If they hold it then it could extend into Thursday morning I guess... but a top is very near.  All the charts are showing exhaustion now.  I'd just like to see some nice squeeze up first before shorting.  I guess Yellen could also say something negative and we just tank right afterwards, but odds say she doesn't do much of anything to give off a positive mood or negative one.  This should be the final wave up (a C wave), but it could be a choppy wave today.  I'm still waiting for a break over the 1900 area before looking for a short.