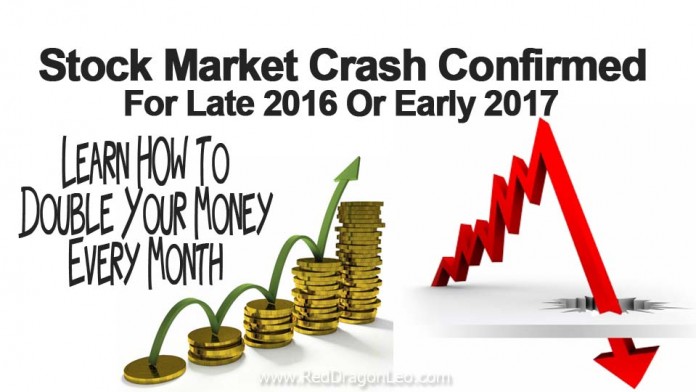 The Moving Averages on the monthly chart crossed and confirmed that the market is headed for a crash within the next year.

Learn how to double or triple your money every month trading the stock market through the e-mini futures, SPY, and Forex instruments.

Before I go over the charts and forecast the coming weeks and months I want to talk about an incredible opportunity to learn how to trade right along side of someone who made $90 million dollars trading.

The system that this master trade used to make that money is now available for everyone to follow and profit from.  Last year he set up an account and tested the system fully on autopilot, and it averaged 15%-17% per month for 12 straight months.  There were NO losing months!

Sure, there were trades that lost but the overall win to lose ratio made a steady profit every month completely on autopilot.  This is perfect for someone who has a day job and can't trade everyday.  This could be used on their 401k program instead of letting some broker trade it for them.  The yearly gains would be around 200% or so... way better then what any other 401k program will make.

Then in December of 2015 this master trader with other great traders opened up the daily chatroom and made 200-300% in ONE Month!

You know me by now, and you know how I think about the elite criminals banksters that rig the market and cheat with their software system that front runs buy and sell orders by milli-seconds (think Goldman Sachs), who never have a losing day trading.  How is that even possible... unless you cheat?

Of course all of this big banksters have some kind of trading system that analysis the market and places trades based on all kinds of technical data that we retail traders don't have access to.  It's a game rigged for the big institutions and it's something they guard heavily and don't let us know about.

Here's someone that developed his own trading system and while he doesn't win all the time like the banksters, he's mastered it to the point that he's made himself very wealthy.  He wasn't an elite growing up, in fact he came from Brooklyn and grew up in a tough neighborhood with very little money.  Now he wants to help give back to the average person.

If you have be following me for very long (I started this blog in 2009) you know I don't get impressed easily.  But after doing some research on this guy I do think he's the "real deal" and something everyone should take a serious look at.  I decided to join to get access to the live trading chatroom and if you really want to learn how to trade profitably you should too.

We all know the market is rigged and run by a supercomputer that I call SkyNet.  So it only makes sense to use a computer software system to analysis the market and help you make trades against SkyNet.  Use a computer to fight against another computer.  We traders need all the help we can get as I know I (and you too I'm sure) have made trades based on your emotions... which usually end up being a loser.

I've been there... and it sucks.  I've just never had access to a computer trading software that will do all the technical analyst for me, but now I do.  You know I talk about Elliottwave counts, Fibonacci levels, Turn dates, Fake Prints, etc... and why I get a lot right the times I get them wrong can really hurt your pocketbook if you are stuck in a trade.

So if you want a change... something that can really help you make money, then I urge you to watch the recorded webinar above and learn as much as you can about the company.  I have my own free chatroom on this blog and I'm in there everyday during normal market hours.  There's about 40 people that signed up and 6-8 regulars that come in and out of the room daily.

The room will stay FREE as I've decided that I don't want to be responsible for giving out trades, which would be something I'd have to do with a paid room.  So instead, I just want to help as many people as possible for free, with nothing asked in return.  I want to spend my time learning how to trade from a master trader and use his automatic trading software to scan for great trades.

So come join me in my chatroom if you like and I help you any way I can.  You have questions about the automatic trading system?  Come ask me and I do my best to answer them.  There's going to be millions made in this company and missing out on the chance to join them is something I wouldn't advise.  Watch the webinar and decide for yourself.

Back to the market... 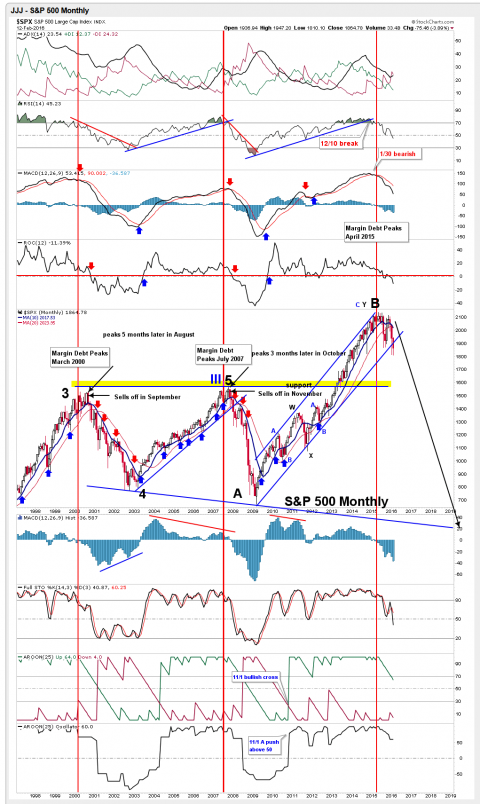 While it's not impossible for the market to turn back up and make a higher high the odds of that happening are very slim.  Trying to think about what the Fed's could do to cause such a rally and I honestly can't think of anything?  We are near zero interest rates, exhausted several QE programs... which have little to NO effect now.  So what's left?  I don't see anything that can save the market from a crash now.

On the shorter term...

We now have a clear 5 wave pattern down from the late December 2015 high, and what looks like the start of a multi-day or multi-week rally.

If the rally extends up to a higher Fibonacci level then my "turn date" could be wrong and/or off by a bit, as I'd expect it to take 2-4 weeks for the whole rally to complete and the higher it goes the longer period in "time" it should take.  Naturally I can't rule out some kind of massive relentless "day after day" straight up move that just kills the bears and hits the higher levels, as then it could still end on my turn date.

After it's done we should see another big drop in the market that takes out the 1810 SPX recent low.  Downside targets are the 1780 area first, then the 1730 area.  This should be some larger (Major) wave C down.  This should take all of the month of March to bottom with an expected low in early April.

Then another rally should take us up into May followed by another drop into June where I think we'll have a strong multi-month rally start from.  This should take us into the August/September period where many crashes start.  It's to early at this point to make a forecast on what to expect then so I won't even try.

One thing remember is that we have the Presidential Election in November so I'd think there will be some wild rallies up and big moves back down in the 2nd half of this year as they attempt to fool all of us retail traders telling us everything is "ok" just before the market falls off a cliff and scare us to death just before a powerful rally.

Everything is fluid and changing so be sure to follow my daily chart updates and come join me in my free chatroom for more up to date information, and any new FP's (fake prints) I find or ritual coded dates like the Lucy passport from the August 24th, 2015 crash.

P.S.  If you have problems joining my chatroom just email me "red (at) reddragonleo (dot) com" as I've had to install more security to stop all the brute force attacks where spam bots try to setup fake email accounts on the registration page. 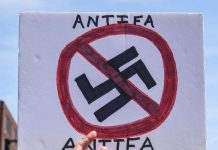