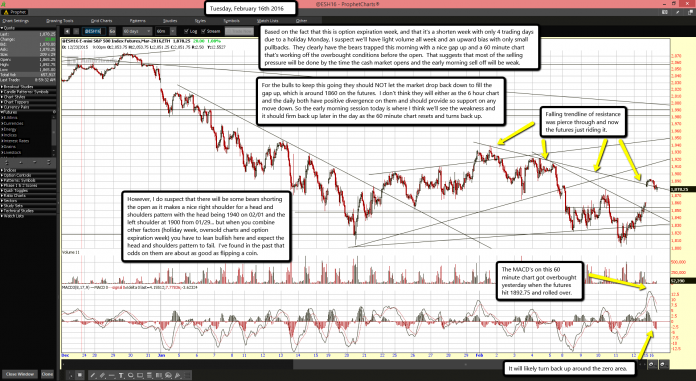 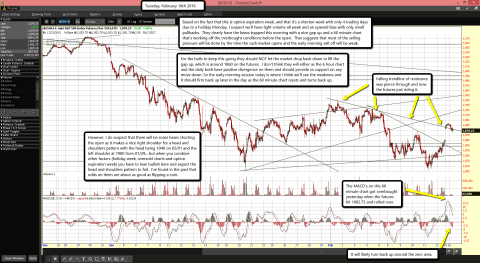 Falling trendline of resistance was pierce through and now the futures just riding it.

The MACD's on this 60 minute chart got overbought yesterday when the futures hit 1892.75 and rolled over.  It will likely turn back up around the zero area.

Based on the fact that this is option expiration week, and that it's a shorten week with only 4 trading days due to a holiday Monday, I suspect we'll have light volume all week and an upward bias with only small pullbacks.  They clearly have the bears trapped this morning with a nice gap up and a 60 minute chart that's working off the overbought conditions before the open.  That suggests that most of the selling pressure will be done by the time the cash market opens and the early morning sell off will be weak.

For the bulls to keep this going they should NOT let the market drop back down to fill the gap up, which is around 1860 on the futures.  I don't think they will either as the 6 hour chart and the daily both have positive divergence on them and should provide so support on any move down. So the early morning session today is where I think we'll see the weakness and it should firm back up later in the day as the 60 minute chart resets and turns back up.

However, I do suspect that there will be some bears shorting the open as it makes a nice right shoulder for a head and shoulders pattern with the head being 1940 on 02/01 and the left shoulder at 1900 from 01/29... but when you combine other factors (holiday week, oversold charts and option expiration week) you have to lean bullish here and expect the head and shoulders pattern to fail.  I've found in the past that odds on them are about as good as flipping a coin.