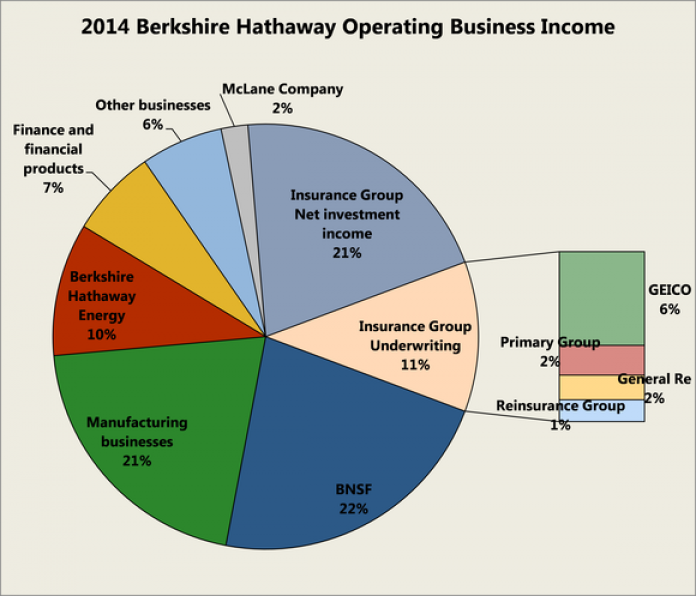 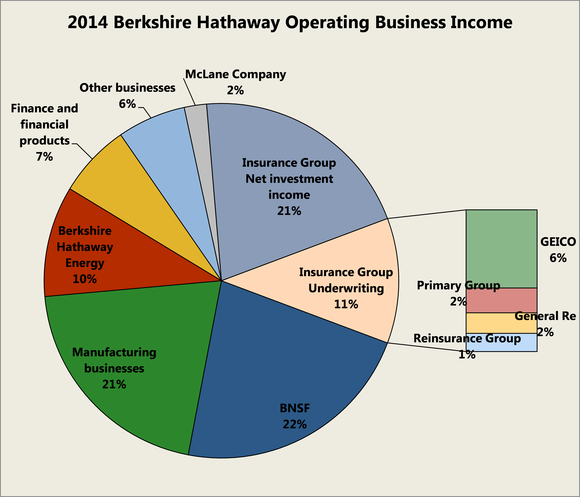 Berkshire’s Earnings: A Surprise Boost From Kraft Heinz, But an Off Year at Geico

Buffett says it’s possible that the offending analysts “don’t know better.” But more likely, Buffett says, the analysts go along with the phony numbers because they fear losing access to management, which is key to a Wall Street analyst’s job these days. Buffett also says analysts may be swept up by a herd mentality and go along with these inflated financials because everyone else is doing it. None of these reasons lets them off the hook, Buffett says.

“Whatever their reasoning, these analysts are guilty of propagating misleading numbers that can deceive investors,” Buffett writes.

Based on pro-forma earnings, profits for the S&P 500 rose an average of 0.4% in 2015. But if you stick with figures that conform to official accounting rules, profits actually plunged nearly 13%. 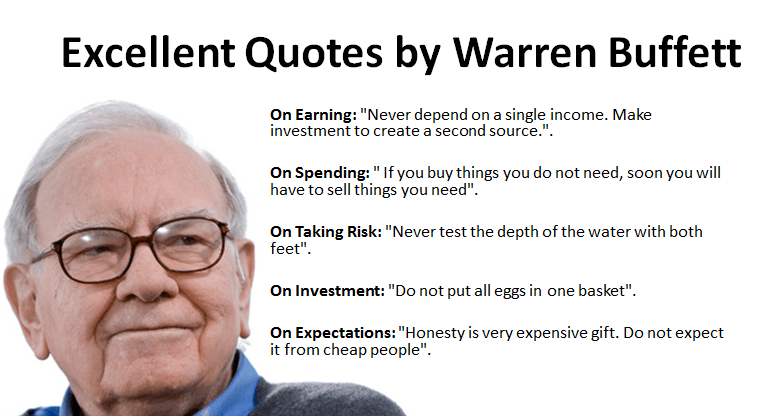 Oddly, Buffett’s denouncement of executives who doctor their earnings comes during a section of the his annual letter in which he does a bit of his own selective accounting. Buffett says that Berkshire shareholders would do better ignoring a portion of the company’s amortization costs. Buffett acknowledges the slight contradiction by saying that he gives that advice with “some trepidation.” But he says amortization, unlike compensation, is not a real expense. What’s more, Buffett says investors when calculating Berkshire’s true earnings should include depreciation, which he says is a often true expense, but doesn’t normally get counted.

“When CEOs or investment bankers tout pre-depreciation figures such as EBITDA as a valuation guide, watch their noses lengthen while they speak,” writes Buffett.

And, by the way, to anyone who doubts the value of compounding those slow, steady gains: 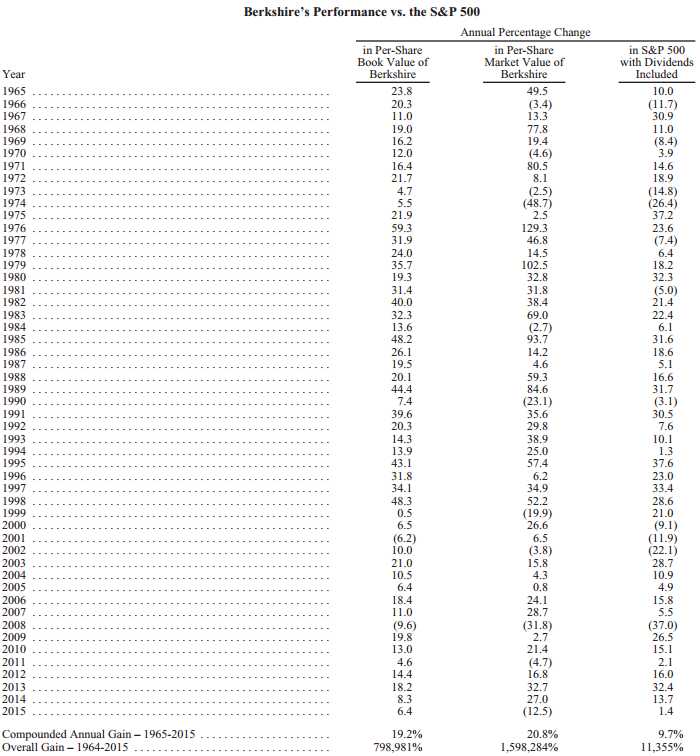 Look at Ackman, for example, his fund was up 40% in 2014 but last year the fund dropped 20.5% and already this year it's down another 17.3% and the gains are all gone - two wasted years.  Why?  Because he's arrogant and he didn't cash out and he stuck with a winning strategy for too long.  Hedge fund managers are often like gamblers at a casino who bet black on the roulette wheel and, if they get a win, they let it ride and then again they let it ride and, if they get black 3 or 4 times in a row, they get to go on TV and act like geniuses and people will throw money at them and they will be treated as heroes.  Even if the 5th time is red and wipes them and their investors out - they simply close down that fund and start another one using their famous name and one-time win to attract new investors.

Think about it, I just told you this but next time Bill Ackman's on TV you'll listen to him as if he knows something.  It's the same thing with Venture Capital firms, they only want to swing for the fences because there's no glory in hitting a bunch of singles and doubles - they all chase the fabled 10-bagger so they can brag about it to their big swinging friends and, sadly, that's just the truth of human nature.

Barry Bonds (cheater), Hank Aaron and Babe Ruth are very, very famous because they are the top 3 home run hitters and yes, we all know Ty Cobb (.366 lifetime) but what about Ed Delahanty (.346)?  Billy Hamilton (.344)?  Harry Heilmann (.342)?  Peter Browning (.341)?  Those guys are all in the top 10 hitters of all time but no home runs so no one remembers.  You have to go really far down the list of home run hitters to find one you've never heard of (Albert Pujols is #14 already!). 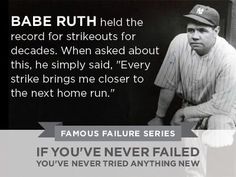 Anyway, home runs put fans in the seats and, for hedge funds and VCs, they bring in the investors but home run hitters also tend to lead the league in strikeouts as well - as you have to commit big to swing for the fences.  That's fine in baseball, because after you're wiped out they give you another turn at the bat but it's not fine for individual investors, who spend a lifetime building their investment savings and can't afford to have it wiped out, right?

Babe Ruth isn't wrong and his attitude is fine (he also had a .342 lifetime batting average, he simply missed big when he did miss) - if you are going to get another chance.  The marginal cost of striking out for Babe Ruth is low because he was going to get 8,399 at bats in his lifetime so his 1,330 strikeouts were a cost of doing business along the way.

If we allocate our portfolios correctly and avoid putting all of our eggs in one basket, we too can swing for the fences once in a while because getting wiped out on a small investment is not a big deal compared to the occasional 10-bagger BUT - you have to be realistic about your chances of both and that is where most investors (and fund managers) fail. 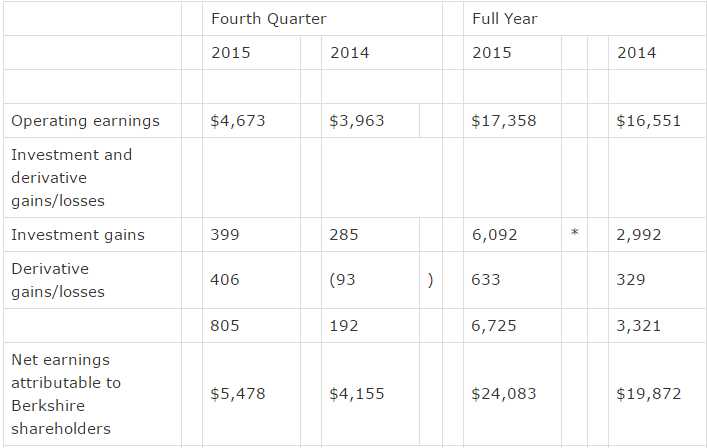 One thing people tend to forget about Berkshire Hathaway is that they made $17.4Bn from the companies they actually run and "only" $6.1Bn in their stock portfolio.  Nothing is better than having a steady flow of income and that allows Berkshire to take the occasional risk in the market, without worrying about seriously impacting the company's future if it doesn't work out.  It also allows Berkshire to ride out market downturns with more cash coming in to press "losing" bets on the way down.

PSW Investments has a similar structure, using the cash-flow from PSW to fund long-term investments in start-up companies.  We don't gamble with money we can't afford to lose but that doesn't mean we don't gamble at all!  It's also the strategy we preach at Philstockworld - playing a conservative, long-term growth strategy with the bulk (80%) of your investing capital and taking shorter-term, opportunistic trades with your remaining investment money.  That way, even if you are wiped out of the short-term funds (-20% of 20% = 4%), if you make just 5% on the long-term funds (5% of 80% = 4%), you still don't lose.

That's also why we tend to use our Short-Term Portfolio to hedge our Long-Term Portfolio, the short-term trades can be quickly entered and exited while we give our long-term positions the time they need to mature.  As of Friday's close, our Long-Term/Short-Term paired portfolios were up over 100% in two years and I noted to Members I would love to just cash out here - as it's easier than managing the bumpy road that lies ahead. 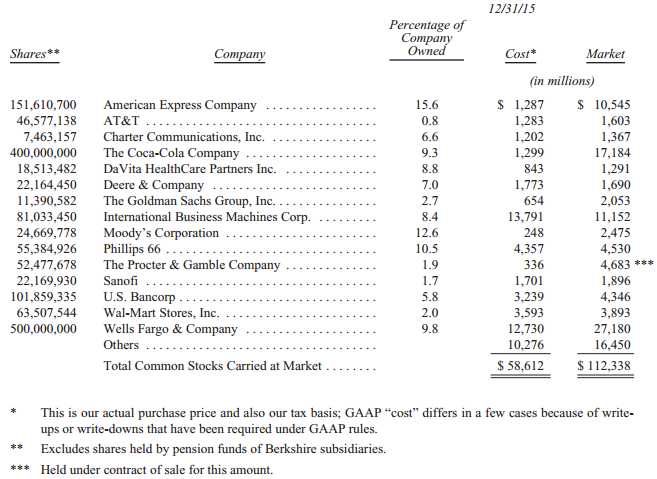 In Buffett's recent letter to shareholders, he mentions that the company's growth really took off in the 90s BECAUSE he moved away from the investing model and more into the ownership model.  At PSW Investments, we never thought otherwise but, as Buffett notes, he learned from experience and we, in turn, learned from Buffett.

Buffett talks about "normalized" earning power and that too is something we teach our Members at PSW.  When we are very bullish in our portfolios, generally that would be 70% bullish and maybe, in an extreme (like 2009), 80% but we always leave room for the possibility we could be wrong.  If you are 70/30 bullish and the market drops 50% then your 70 becomes 35 but, because we leverage our hedges, the 30 becomes 60 and your net is 95 while the rest of the market is on a half-priced sale.

As long as we always have access to cash that allows us to pick up companies when they are on sale, our portfolios are set up for great long-term growth, no matter what market conditions we have to endure over the short run.

As Buffett notes:  "At Berkshire, we much prefer owning a non-controlling but substantial portion of a wonderful company to owning 100% of a so-so business. It’s better to have a partial interest in the Hope Diamond than to own all of a rhinestone.  Our appetite for either operating businesses or passive investments doubles our chances of finding sensible uses for Berkshire’s endless gusher of cash."

Similarly, when people ask me what's an appropriate amount of money to have to retire I tell them to just keep working as long as they can and let the investment income grow on the side.  The bigger you let your retirement savings get, the less work they will have to do in your golden year and the less risk you will have of having to downgrade your lifestyle down the road (see "How to Get Rich Slowly").

Buffett likes to tend to his core holdings and add "bolt-on" acquisitions, which compliment his core businesses but he makes it clear how please he is to make large acquisitions and outright invites any Fortune 500 company to call him if they are interested in selling (Buffett will not go hostile).  With 30 or 40 more years to go before we're gobbling up F500 companies, we are employing similar techniques in our own modest portfolios.  And, as Buffett wisely notes.

Of course, a business with terrific economics can be a bad investment if it is bought at too high a price. We have paid substantial premiums to net tangible assets for most of our businesses, a cost that is reflected in the large figure we show for goodwill and other intangibles. Overall, however, we are getting a decent return on the capital we have deployed.

Patience is, by far, the hardest thing we have to teach our Members.  Having a long-term outlook is much easier when you are an 85 year-old Billionaire and, keep in mind, Buffett has been doing this since the 60s.  It's not just about age, it's about the experience of actually trading the markets for, let's say 100,000 hours.  At PSW, we use Gladwell's rule of thumb that it takes about 10,000 hours of practice to become an expert trader/investor.  Buffett has put his time in in spades!

Looking forward to our next decade of investing!