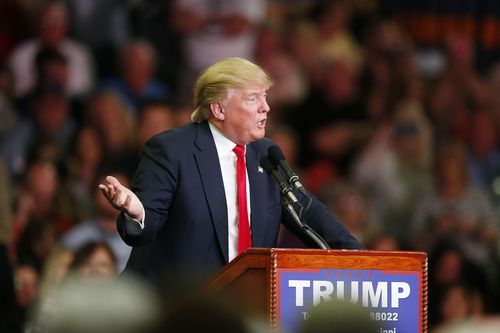 Donald Trump speaks during a campaign rally on March 7, 2016, in Madison, Miss.

Donald Trump gets an ‘F’ for a video he posted to YouTube purporting to tell the “truth” about Trump University, the real-estate program that has been the subject of three ongoing lawsuits alleging fraud.

In the video, Trump holds up a sheet of paper showing that the Better Business Bureau gave Trump University an “A” rating, claiming it proves that what he said during the March 3 debate was correct. That’s false. As we wrote in our debate story, the most recent BBB rating for Trump University that we could find for the program was a “D-” in 2010 — which is when the school stopped taking new students.

But Trump keeps insisting he is right, even when the evidence proves him wrong. He tweeted a screenshot of the “A” rating after the debate. He posted a video to YouTube on March 7, criticizing Fox News for refusing to correct the record during the debate. He tweeted about that, too.

Trump video, March 7: "Well, I turned out to be right. Before the end of the debate I gave them [the Fox moderators] the ‘A’ — we had it sent to us — and here’s the ‘A’ rating from the Better Business Bureau, and they refused to put it on that night …. So we have an A rating not a D- rating."

Let this be the last word on Trump University’s rating, and it comes from the Better Business Bureau, which issued a statement March 8 “in response to a number of inaccurate reports that continue to be repeated.”

That means what Trump literally holds out as evidence is meaningless and misleading.

Trump University was never licensed as a university and had to change its name to The Trump Entrepreneur Initiative in May 2010. (The BBB rating Trump holds up in the video shows the exact date as May 21, 2010.) Trump’s program stopped accepting new students in 2010, as Alan Garten, an attorney for Trump and his former school, told CNN in an interview in September 2015 (at about the 1 minute mark).

So, the school stopped taking new students and the complaints stopped, too. That had a direct effect on the “A” rating that Trump now boasts about. The BBB statement says, “BBB ratings are based on information we obtain about a business, including complaints received from the public. The reporting period is three years.” Once the old complaints “rolled off the Business Review,” as the BBB statement put it, the Trump program’s rating went up to an “A” in July 2014. The BBB stopped rating the Trump Entrepreneur Initiative in September 2015.

Trump holds up an image of an “A” rating for the Trump Entrepreneur Initiative, not Trump University. That would have been on or about July 2014 — three years after the school stopped taking new students.

For more about Trump’s misleading statements about Trump University please see our item, “Trump’s Defense of his ‘University'.” That article also covers another misleading claim that Trump makes in the YouTube video about students who took the courses and rated them as “excellent.”