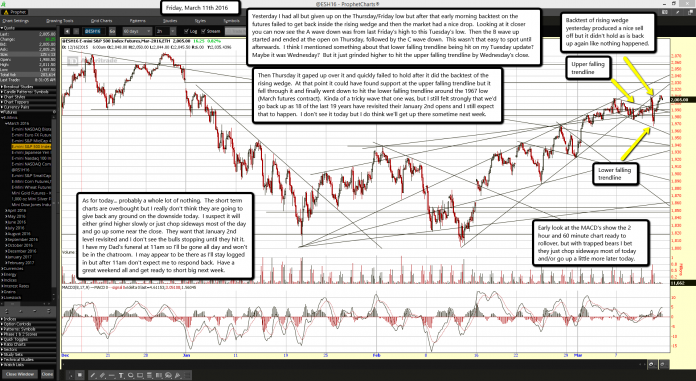 Backtest of rising wedge yesterday produced a nice sell off but it didn't hold as is back up again like nothing happened.

Early look at the MACD's show the 2 hour and 60 minute chart ready to rollover, but with trapped bears I bet they just chop sideways most of today and/or go up a little more later today.

Yesterday I had all but given up on the Thursday/Friday low but after that early morning backtest on the futures failed to get back inside the rising wedge and then the market had a nice drop.  Looking at it closer you can now see the A wave down was from last Friday's high to this Tuesday's low.  Then the B wave up started and ended at the open on Thursday, followed by the C wave down.  This wasn't that easy to spot until afterwards.  I think I mentioned something about that lower falling trendline being hit on my Tuesday update?  Maybe it was Wednesday?  But it just grinded higher to hit the upper falling trendline by Wednesday's close.

Then Thursday it gaped up over it and quickly failed to hold after it did the backtest of the rising wedge.  At that point it could have found support at the upper falling trendline but it fell through it and finally went down to hit the lower falling trendline around the 1967 low (March futures contract).  Kinda of a tricky wave that one was, but I still felt strongly that we'd go back up as 18 of the last 19 years have revisited their January 2nd opens and I still expect that to happen.  I don't see it today but I do think we'll get up there sometime next week.

As for today... probably a whole lot of nothing.  The short term charts are overbought but I really don't think they are going to give back any ground on the downside today.  I suspect it will either grind higher slowly or just chop sideways most of the day and go up some near the close.  They want that January 2nd level revisited and I don't see the bulls stopping until they hit it.  I have my Dad's funeral at 11am so I'll be gone all day and won't be in the chatroom.  I may appear to be there as I'll stay logged in but after 11am don't expect me to respond back.  Have a great weekend all and get ready to short big next week.