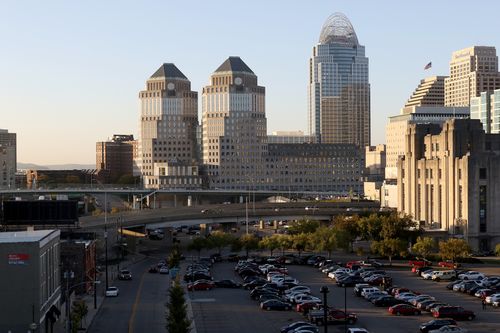 Procter & Gamble is based in Downtown Cincinnati.

Procter & Gamble on Tuesday reported a $2.8 billion profit for its third quarter ended March 31 – a 28 percent increase from a year ago.

Total sales at the Cincinnati-based consumer products giant dropped 12.7 percent to $15.8 billion, from the same period in 2015. Adjusted for the company's ongoing divestiture of nearly 100 noncore brands, sales declined 7 percent from last year. The company said closely-watched organic sales (a metric that excludes the impacts of mergers, acquisitions and foreign exchange) rose 1 percent.

P&G has reclassified more than 40 beauty brands it plans to sell later this year as "discontinued operations" and amended their financial statements to reflect those changes. Had P&G already exited those and other brands already sold off, the company said total sales for the quarter a year ago would have been $16.9 billion.

The brand sale is part of a broader restructuring that has already jettisoned the Duracell batteries brand and Iams pet food and others. Since 2014, P&G has embarked on selling off brands commanding $10 billion in sales to slim down to a $70 billion company doing business under 65 core labels.

The Duracell brand sale to Warren Buffett's Berkshire Hathaway closed in the third quarter. The conglomerate tendered 52 million shares of P&G stock back to the Cincinnati company in exchange for the battery brand.

Based on the stock price at closing and netting out the $1.8 billion P&G was required to reinvest in Duracell before handing it off, the consumer products company got $2.4 billion for the battery brand. But instead of getting a cash infusion, the transaction retired 2 percent of P&G's entire outstanding stock.

Later this year, P&G will close on its divestiture of the beauty brands it has decided to exit, including CoverGirl makeup, Wella and Clairol hair coloring. Those brands doing $6 billion in annual sales will become a separate company that will merge with New York's Coty Inc., which makes Rimmel makeup and is the licensed manufacturer of Calvin Klein and dozens of other fragrances.