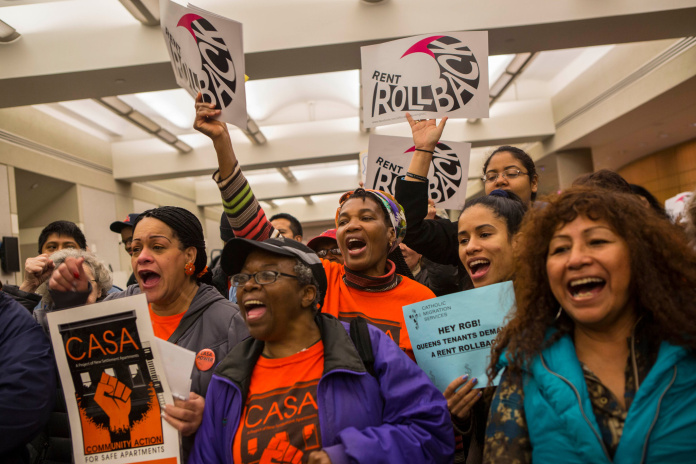 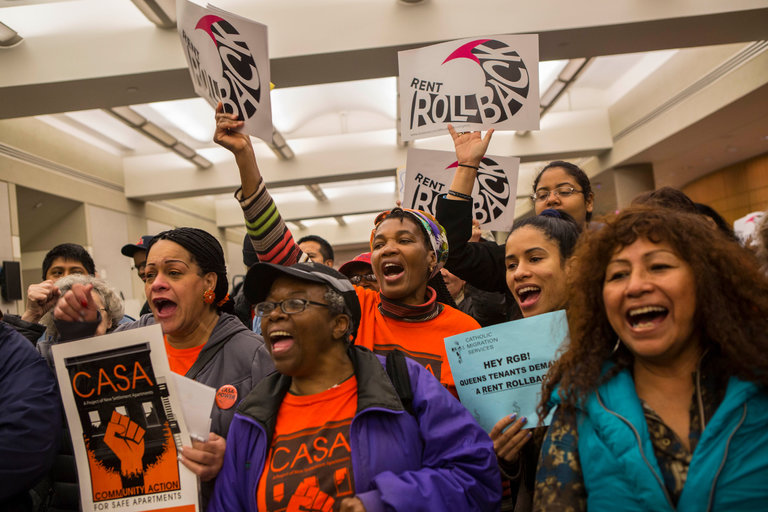 About 400 tenants and their supporters packed a meeting Tuesday to urge the city’s Rent Guidelines Board to decrease rents.

New York City’s rent-stabilized tenants could see another rent freeze this year for one-year leases after a vote on Tuesday by members of the city’s Rent Guidelines Board.

Last year was the first time all nine members of the board had been appointed by Mayor Bill de Blasio, a Democrat.

“We’re committed to establishing rent adjustments that are fair, grounded in the data, and that reflect real-life conditions in our neighborhoods,” Austin Finan, a spokesman for the mayor’s office, said.

The board’s vote was a preliminary step before public hearings and a final decision on June 27. The final rent levels could go up or down, but the board, which represents both tenants and landlords as well as members of the public, has usually stayed within its proposed range of possibilities in the final vote.

Reports by the rent board’s staff show that the price index of operating costs for rent-stabilized properties decreased 1.2 percent this year and that landlords’ net operating income grew by 3.5 percent in 2014, the most recent data available. It is the 10th straight year that income has outpaced expenses, the research shows.

But landlord groups say that the numbers do not present a full picture of costs and that, especially with the 0 percent or paltry rent increases approved in recent years, many owners are not making enough to maintain their aging buildings.

The Rent Stabilization Association, a landlord group with 25,000 members, had called for a 4 percent increase for one-year leases and 7 percent for a lease of two years.

“It’s time for a reasonable rent increase,” Jack Freund, executive vice president of the group, told the board during testimony at a meeting last month.

There were positive economic signs for tenants, the board’s research shows, with rising employment and wages and fewer evictions last year. Still, the most recent figures in 2014 showed that most rent-stabilized tenants could not afford their apartments, based on the federal standards that consider housing affordable if a household’s rent does not exceed 30 percent of its income.

The median rent and utilities-to-income ratio for stabilized tenants was 36.4 percent, the figures showed.

On Tuesday night, a crowd of about 400 tenants and their supporters packed an auditorium at the CUNY Graduate Center in Midtown Manhattan to chant and wave signs demanding a “rent rollback” and “no more homeless.” The audience grew more contentious when a group of tenants stopped the proceedings by rushing to the front of the auditorium to protest the voting down of a proposal to decrease rents by board members.

“Shame, shame,” the group yelled, among other chants, for about 10 minutes.

“There’s some disappointment, but it’s lower than I thought it would be,” Monica Duke, 49, a tenant from Harlem, said of the board’s decision. “I’m pleased it’s not higher. I’ve seen tenants being evicted in my building and become homeless.”

The new guidelines will be in effect for lease renewals between Oct. 1 and Sept. 30, 2017.