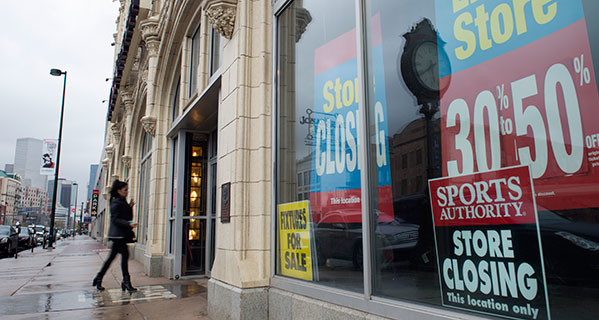 Sports Authority has officially struck out. After filing for bankruptcy protection 3 months ago, the sporting goods retailer will be shuttering all 460 of its stores, according to a court document obtained by The Associated Press.

Sports Authority had initially planned to close about 30% of its stores in a restructuring, but now plans to shut them all down. The court filing says going-out-of-business sales will start around Wednesday of this week and may continue through August.

The company reportedly intends to sell its store leases in an upcoming auction.

Sports Authority has struggled to stay afloat as more athletic-minded shoppers head to the internet for convenience, deals and discounts. In March, when the  company filed for bankruptcy and initially said it would close 140 of its brick-and-mortar stores, CEO Michael Foss blamed an increase in online shopping.

“We are taking this action so that we can continue to adapt our business to meet the changing dynamics in the retail industry,” Foss said at the time. “We intend to use the Chapter 11 process to streamline and strengthen our business both operationally and financially so that we have the financial flexibility to continue to make necessary investments in our operations.”

Shoppers looking to stock up on athletic shoes, workout gear or sporting equipment should make plans to take advantage of Sports Authority's upcoming closeout sales. Currently, the retailer’s website is littered with deals advertising the chain's "biggest BOGO sale of the season" and "50% off Memorial Day deals."

But consumers should hold out a few days to take advantage of the best sales.